Henry II the Pious (Polish: Henryk II Pobożny) (1196 – 9 April 1241),[1] of the Silesian line of the Piast dynasty was Duke of Silesia at Wrocław and Duke of Kraków and thus High Duke of all Poland as well as Duke of Southern Greater Poland from 1238 until his death. During 1238–1239 he also served as a regent of two other Piast duchies: Sandomierz and Upper Silesian Opole-Racibórz.

Heir of Wrocław. Co-ruler with his father

Henry II was the second son of the Polish High Duke Henry I the Bearded, Duke of Silesia-Wrocław, by his wife (and later Saint) Hedwig of Andechs, daughter of Duke Berthold IV of Merania. He elder brother Bolesław died in 1206. In 1213, his younger brother Konrad the Curly died during a hunt, leaving Henry II as the sole heir of Lower Silesia. Around 1218 his father arranged his marriage to Princess Anna, daughter of King Ottokar I of Bohemia. This union with the royal Přemyslid dynasty allowed Henry II to participate actively in international politics.

Henry I the Bearded quickly designated his sole surviving son as his sole heir, and from 1222, the young prince countersigned documents with his father. By 1224, he had his own seal and notary. In 1227, during a meeting of Piast Dukes in Gąsawa, Henry I and the High Duke Leszek I the White were ambushed, Leszek was killed and Henry I was seriously wounded. Young Henry II acted as interim Duke. In 1229, Henry I captured by Duke Konrad I of Masovia, and again young Henry II acted as interim Duke. During 1229–30, Henry II led a military expedition to recover and secure the possession of Lubusz Land, and in 1233–34 Henry actively supported his father's affairs in Prussia and Greater Poland. In 1234, Henry I named his son Henry II co-ruler. Later, Henry I took the Duchies of Krakow and Silesia, and Henry II was given the Duchies of Silesia and Greater Poland. When Henry I the Bearded died on 19 March 1238, Henry II became Duke of Silesia, Krakow and Greater Poland. 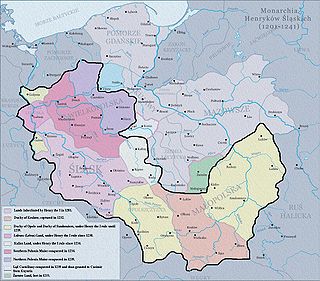 Henry II's reach of power at its greatest extent, 1239

Henry II could retain his authority as a regent over the Upper Silesian Duchy of Opole-Raciborz and the Duchy of Sandomierz during the minority of their rulers Mieszko II the Fat and Bolesław V the Chaste. Nevertheless, in 1239, Henry was compelled to resign the regency, although he remained on good terms with the Dukes of Opole and Sandomierz, and managed to retain Greater Polish Kalisz and Wieluń.

The situation in the northwest was more complicated: Margrave Otto III of Brandenburg took the important Greater Polish fortress at Santok and besieged Lubusz. Henry II also inherited the disputes with Konrad of Masovia, Władysław Odonic, and with the Church, led by Pełka, Archbishop of Gniezno. The situation changed unexpectedly after the death of Władysław Odonic on 5 June 1239, who left two minor sons, Przemysł I and Bolesław the Pious. Henry II took the majority of Odonic's possessions (including Gniezno), leaving Nakło nad Notecią and Ujście to Odonic's sons.

Henry then abandoned the traditional alliance of his family with the Imperial House of Hohenstaufen and supported Pope Gregory IX, immediately resolving his dispute with the Church.[2] He then put an end to his conflicts with Konrad of Masovia by arranging the marriages of two of his daughters to two of Konrad's sons: Gertrude to Bolesław, and Constance, to Casimir I of Kuyavia. In 1239, Henry II finally lost the Santok fortress to Margrave Otto III after Henry's defeat in the Battle of Lubusz.

In the East, a new dangerous opponent appeared: the Mongols, under the leadership of Batu Khan, who, after the invasion of Rus' chose the Kingdom of Hungary as his next target. Batu Khan realized that he had to take control of Poland before he could take Hungary. In January 1241, Batu sent reconnaissance troops to Lublin and Zawichost. The invasion was launched a month later, by an army of 10,000 men under the leadership of Lord Orda. In Lesser Poland the Mongols met weaker resistance, defeating and killing almost all the Kraków and Sandomierz nobility in the Battle of Tursko (13 February), and the Battles of Tarczek and Chmielnik (18 March), including the voivode of Kraków, Włodzimierz and the castellan Clement of Brzeźnica. All of Lesser Poland, including Kraków and Sandomierz, fell into the hands of the Mongols.

Henry II didn't wait for the promised aid from Western rulers and began to concentrate the surviving troops of Lesser Poland and his own Silesian and Greater Poland forces in Legnica. Europe's rulers were more focused on the struggle between the Holy Roman Empire and Papacy, and they ignored Henry's requests for help. The only foreign troops who joined him were those of King Wenceslaus I of Bohemia and the combined forces of some Knights Templar and Knights Hospitallers, and perhaps some Teutonic Knights. Some sources report that European forces halted their troops near Legnica, probably fearing that the Christian Army would become an easy prey to the Mongols. The battle took place on 9 April 1241. Henry II was defeated and killed in action.

The defeat was widely blamed on the European monarchs, especially Emperor Frederick II and King Béla IV of Hungary, who had refused to help, and the unexpected retreat from the battle by Henry's Upper Silesian cousin Mieszko II the Fat, through a trick of the Mongols. There are two descriptions of Henry's death, one submitted by Jan Długosz (today considered dubious), and the second by C. de Brigia in his Historii Tartatorum (based on reports of direct witnesses, now considered more reliable). Fortunately for Poland, the Mongols did not intend to occupy the country, and shortly afterward they went through Moravia to Hungary, wanting to connect with the main army of Batu Khan. Henry's naked and decapitated body could only be identified by his wife, because of his polydactyly. He had six toes on his left foot,[3] which was confirmed when his tomb was opened in 1832. Henry was buried in the crypt of the Franciscan Church of Sts. Vincent and Jacob in Wrocław (Breslau).

Despite ruling for only three years, Henry remained in the memories of Silesia, Greater Poland and Kraków as the perfect Christian knight, lord and martyr, whose brilliant career was abruptly ended by his early death. Upon his death, the line of the Silesian Piasts fragmented into numerous Dukes of Silesia, who (except for Henry's grandson Henry IV Probus) were no longer able to prevail as Polish High Dukes and subsequently came under the influence of the neighbouring Kingdom of Bohemia. 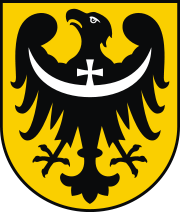 Coat of arms of Silesian Piasts