Henry I of Cyprus

Henry I of Cyprus, nicknamed the Fat, aka Henry of Lusignan or Henri I le Gros de Lusignan (May 3, 1217 – January 18, 1253 at Nicosia) was King of Cyprus from 1218 to 1253. He was the son of Hugh I of Cyprus and Alice of Champagne of Jerusalem. When his father Hugh I died on January 10, 1218, the 8-month-old Henry became king. His mother was the official Regent, but handed off the actual governing to her uncle, Philip of Ibelin. When Philip died, the effective regency passed to his brother, John of Ibelin, the Old Lord of Beirut.

Henry was crowned at the age of 8 at Santa Sophia, Nicosia, in 1225.[1] The reason for the early coronation was as a political maneuver by his uncle Philip, who sensed that Frederick II, Holy Roman Emperor, was going to attempt to seize power. In 1228 this did occur, as Frederick forced John of Ibelin to hand over the regency, and the island of Cyprus. However, when Frederick left the island in April, John counter-attacked and regained control, which began the War of the Lombards. Henry was able to assume control of the kingdom when he came of age at 15, in 1232, and maintained close ties with the Ibelin family.

Henry himself served as Regent of Jerusalem for Conrad of Hohenstaufen 1246–1253.

He was married three times; his third wife, whom he married in 1250, was Plaisance of Antioch, daughter of Bohemund V of Antioch. They had a son, Hugh. 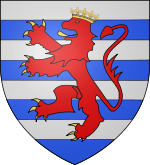 coat-of-arms of Lusignan of Cyprus