Henry Ireton (1611 – 26 November 1651) was an English general in the Parliamentary army during the English Civil War, the son-in-law of Oliver Cromwell.

He was the eldest son of German Ireton of Attenborough, Nottinghamshire, and was baptized in St Mary's Church on 3 November 1611. He became a gentleman commoner of Trinity College, Oxford in 1626, graduated BA in 1629 and entered the Middle Temple the same year.

On the outbreak of the Civil War, he joined the parliamentary army, fighting at the Battle of Edgehill in October 1642, and at the Battle of Gainsborough in July 1643. He was made deputy-governor of the Isle of Ely by Cromwell and served under Manchester in the Yorkshire campaign and at the second Battle of Newbury, afterwards supporting Cromwell in his accusations of incompetency against the general.

On the night before the battle of Naseby, in June 1645, Ireton succeeded in surprising the Royalist army and captured many prisoners. The next day, on the suggestion of Cromwell, he was made commissary-general and appointed to the command of the left wing, Cromwell himself commanding the right. The wing under Ireton was completely broken by the impetuous charge of Rupert and Ireton was wounded and taken prisoner, but Cromwell charged and successfully routed the Royalists, freeing prisoners including Ireton. 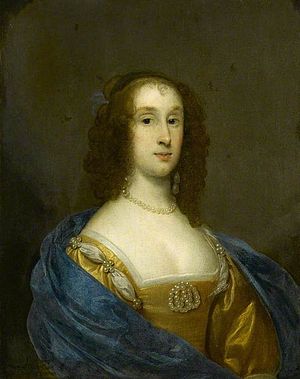 Ireton was at the siege of Bristol in September 1645 and took part in the subsequent campaign that succeeded in overthrowing the royal cause. On 30 October 1645 Ireton entered parliament as member for Appleby. On 15 June 1646,[citation needed][1] during the siege of Oxford he and Bridget Cromwell, daughter of Oliver Cromwell, were married. The marriage brought Ireton's career into parallel with Cromwell's.

Political views and debates over the future of the monarchy

While Cromwell's policy was practically limited to making the best of the present situation, and was inclined to compromise, Ireton's attitude was based on well-grounded principles of statesmanship. At the Putney Debates he opposed extremism, disliked the views of the Republicans and the Levellers, which he considered impractical and dangerous to the foundations of society, and wished to retain the constitution of King, Lords and Commons. He argued for these in the negotiations of the army with Parliament, and in the conferences with the king, being the person chiefly entrusted with the drawing up of the army proposals, including the manifesto called "The Heads of the Proposals" which proposed a constitutional monarchy. He tried to prevent the breach between the army and parliament, but when it happened, he supported the negotiations with the king till his actions made him unpopular.

Ireton finally became convinced of the hopelessness of dealing with King Charles, and, after the king's flight to the Isle of Wight, treated his further proposals with coldness and urged the parliament to establish an administration without him. Ireton served under Fairfax in the second civil war in the campaigns, in Kent and Essex, although it was Fairfax, as Lord General, and not Ireton as is sometimes believed, who was responsible for the executions of Sir Charles Lucas and Sir George Lisle at Colchester. After the rejection by the king of the last offers of the army, the Commissary General showed special zeal in bringing about his trial. He wrote the Army's statement about the regicide – the Remonstrance of the Army – with Hugh Peters. He was active in the choice to purge rather than reelect Parliament and supported the second Leveller Agreement of the People. He sat on the king's trial and was one of the commissioners who signed the death warrant.

Ireton's regiment was chosen by lot to accompany Cromwell in his Irish campaign. Ireton arrived in Dublin two days after Cromwell on 17 August 1649, with 77 ships full of troops and supplies. Ireton was appointed major-general and after the conquest of the south of Ireland, Lord President of Munster. He went over with John Cook with a brief to reform the law of Ireland, to anglicise it and make it a model for a new settlement of English law.

In May 1650 Cromwell was recalled to England to command a Parliamentary force preparing to invade Scotland, and Ireton assumed command of the New Model Army in Ireland with the title and powers of Lord Deputy to complete the conquest of the country. This he proceeded to do with his usual energy, becoming noted as much by the savagery of his methods as for his military skill. By the middle of 1650 Ireton and his commanders faced two problems. One was the capture of the remaining cities held by the Irish Confederate and Royalists forces. The other was an escalating guerrilla war in the countryside as Irish fighters called tories attacked his supply lines. Ireton appealed to the English Parliament to publish lenient surrender terms for Irish Catholics, in order to end their resistance, but this was refused.

His first action after the refusal was to mount a counter-guerrilla expedition into the Wicklow Mountains early in June 1650, in order to secure his lines of supply for the Siege of Waterford in Ireland's southeast. Having done this Ireton blockaded Waterford into surrender by August 1650. Not risking an assault, Ireton systematically constructed trenches to bring his siege guns within range of the walls and stationed a Parliamentary fleet off the city to prevent its re-supply. Thomas Preston surrendered Waterford after a three-month siege. Ireton then advanced to Limerick by October, but had to call off the siege due to cold and bad weather. Early in 1651 Ireton ordered that areas harbouring the tory guerrillas should be systematically stripped of food – a policy that caused a widespread famine in Ireland by the end of the year. Ireton returned to Limerick in June 1651 and besieged the city for five months until it surrendered in October 1651. At the same time, Galway was under siege by Parliamentarian forces, and Ireton personally rode to inspect the command of Charles Coote, who was blockading that city. The physical strain of his command told on Ireton however and he fell ill.

After the capture of Limerick, Ireton had dignitaries of Limerick hanged for their obstinate defence of the city, including an Alderman, Bishop Terence Albert O'Brien and an English Royalist officer, Colonel Fennell. He also wanted the Irish commander, Hugh Dubh O'Neill hanged, but Edmund Ludlow cancelled the order after Ireton's death.

On 31 October 1651, as Bishop O'Brien was dragged to the gibbet, he turned and summoned Ireton to answer at God's judgment seat for his murders. Ireton fell ill of the plague that was raging through the town, and died on 26 November, according to the Hibernica Dominicana, "privately muttering to himself 'I never gave the aid of my counsel towards the murder of that bishop; never, never; it was the council of war did it… I wish I had never seen this popish bishop'." [2] Among his last words were "blood! blood! I must have more blood!",[3] Some partial observers claim the allegation is doubtful since the source was "hostile" to Ireton. His loss "struck a great sadness into Cromwell" and he was considered a great loss to the administration.

At Ireton's funeral, in Westminster Abbey,[4] John Watson and others wore new tabards that replaced the royal arms with the new arms of the commonwealth.[5]

On 30 January 1661, following the Restoration of the English monarchy of 1660, Charles II had Ireton's corpse exhumed from Westminster and mutilated in a posthumous execution, along with those of Cromwell and John Bradshaw, in retribution for signing his father's death warrant. The date was symbolic, being the 12th anniversary of the execution of Charles I.

By his wife, Bridget Cromwell, Ireton left one son, Henry Ireton (c.1652–1711),[6] and four daughters, one of whom, Bridget Bendish (she married Thomas Bendish in 1670) is said to have compromised herself in the Rye House Plot of 1683, as did Henry.[7] Ireton's widow Bridget afterwards married General Charles Fleetwood. Another daughter Elizabeth married Thomas Polhill, their son was David Polhill.

In the 1970 film Cromwell starring Richard Harris and Alec Guinness, Michael Jayston plays Ireton as a subtle but well-meaning manipulator who hates Charles I and pushes Cromwell into actions which Cromwell at first considers neither desirable nor possible but then pursues all the way. This version of Ireton is ready to denounce the King and plunge England into civil war before Cromwell becomes convinced that this is a necessary step. In the film, he and Cromwell are also among the five members whom Charles I attempts to arrest on the eve of the war (when in fact they were not) and, after the King is executed, is upbraided by Cromwell as being too ambitious. There is no mention in the film of Ireton marrying Cromwell's daughter.

Ireton is the main character in John Attenborough's 1987 historical fiction novel Destiny Our Choice, which gives a generally positive view of Ireton, claiming that he was influential in saving the life of Hugh O'Neill after the siege of Limerick.

The town of Ireton, Iowa was named after Henry Ireton.