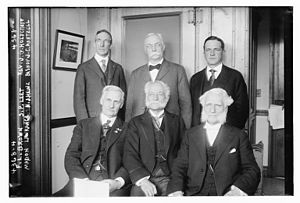 Founder Henry John Heinz began packing foodstuffs on a small scale at Sharpsburg, Pennsylvania, in 1869. There he founded Heinz Noble & Company with a friend, L. Clarence Noble, and began marketing horseradish. The company went bankrupt in 1875, but the following year Heinz founded another company, F & J Heinz, with his brother John Heinz and a cousin Frederick Heinz. One of this company's first products was tomato ketchup.

The company continued to grow, and in 1888 Heinz bought out his other two partners and reorganized the company as the H. J. Heinz Company, the name it carries to the present day. Its slogan, "57 varieties", was introduced by Heinz in 1896 although the company was by then selling over 60 different products.[3] Heinz said he chose "5" because it was his lucky number and the number "7" was his wife's lucky number.[4]

H. J. Heinz was incorporated in 1905, and Heinz served as its first president, remaining in the position for the rest of his life. Under his tutelage, the company was noted for fair treatment of workers and for pioneering safe and sanitary food preparation. He provided his employees with free medical care, recreation facilities such as gyms, swimming pools, and gardens; and educational opportunities such as libraries, free concerts, and lectures. Heinz led a successful lobbying effort in favor of the Pure Food and Drug Act in 1906. During World War I, he worked with the Food Administration.[5]

He was a director in many financial institutions, and was chairman of a committee to devise ways of protecting Pittsburgh from floods.[5]

At the time of Heinz's death in Pittsburgh at the age of 74, the H. J. Heinz Company had over twenty food processing plants, and also included seed farms and container factories. Heinz was the grandfather of H. J. Heinz II, great-grandfather of U.S. Senator H. John Heinz III of Pennsylvania in the United States and great-great grandfather of Henry John Heinz IV, André Thierstein Heinz and Christopher Drake Heinz.

Heinz was born October 11, 1844 in Pittsburgh, Pennsylvania, the son of John Henry Heinz (1811–1891), of Kallstadt, Kingdom of Bavaria, Germany, and Anna Margaretha Schmidt (1822–1899), of Bavaria.[1] His father emigrated to America in 1840, his mother in 1843. They were married December 4, 1843 in Birmingham, Pennsylvania on the south side of Pittsburgh, where they first met.[1][6] Anna was the daughter of a Lutheran minister and John Heinz was a Lutheran living in a predominately Catholic area in Germany.[1][6] Henry Heinz was raised[7] and confirmed Lutheran, but was ecumenical in his Christianity being a Methodist, a Presbyterian and working closely with Baptists as well.[1]

At the beginning of his will he wrote: "I desire to set forth, at the very beginning of this Will, as the most important item in it, a confession of my faith in Jesus Christ as my Savior."[8] When he visited England, his "tourist stops" included the grave of John Bunyan, Isaac Watts, and John Wesley. He visited a chapel that John Wesley founded, where he later wrote, "I felt I was upon holy ground."[9]

Heinz was married to Sarah Sloan Young Heinz, a Scotch-Irish Presbyterian, on September 3, 1869[1] and had four children that survived to adulthood:[10]

Heinz died at his home May 14, 1919 after contracting pneumonia. His funeral was at East Liberty Presbyterian Church and he was buried at Homewood Cemetery in Pittsburgh, in the Heinz Family Mausoleum.[1][6][11]

A bronze statue of Heinz by Emil Fuchs was dedicated on October 11, 1924 at the Heinz Company building Pittsburgh,[12]