Henry Jamison "Jam" Handy (March 6, 1886 – November 13, 1983) was an American Olympic breaststroke swimmer, water polo player, and leader in the field of commercial audio and visual communications. Handy was noted for the number of training films that he produced over the years.

As a swimmer, Handy introduced a number of new swimming strokes to Americans, such as the Australian crawl. He would often wake up early and devise new strokes to give him an edge over other swimmers. Swimming led to him getting a bronze in the 1904 Olympics at St. Louis, Missouri. Twenty years later he was part of the Illinois Athletic Club water polo team at the 1924 Olympics in Paris, France. He broke the record of longest period of time between first and last competition. The team won the bronze at that Olympics.

Handy attended North Division High School in Chicago, and then the University of Michigan during the 1902–03 academic year. During that time he was working as a campus correspondent for the Chicago Tribune when on May 8 he wrote an article about a lecture in the Elocution 2 class given by Prof. Thomas C. Trueblood as a "course in lovemaking." Handy went on to describe how Trueblood had dropped to a bended knee in order to demonstrate how to make an effective marriage proposal. John T. McCutcheon, a Chicago Record Herald cartoonist, followed the next day with a cartoon about a "Professor Foxy Truesport" showing his class how to best make love.

Neither Trueblood nor university President James B. Angell were amused. Ten days after the initial article was published, Handy was suspended for a year for "publishing false and injurious statements affecting the character of the work of one of the Professors."[1] Handy was told he could re-apply one year later. Instead, Handy decided to apply to a different school, but he was unable to gain acceptance to other schools because of what had happened at the University of Michigan. Handy was accepted to the University of Pennsylvania, but was told to leave after two weeks of classes.

Tribune editor Medill McCormick tried to intervene on Handy's behalf, but Angell refused to change the suspension. At that point McCormick offered Handy a job. Handy worked in a number of departments at the Tribune. It was during his time working on the advertising staff that Handy observed that informing and building up salespeople's enthusiasm for the products they were selling helped to move more merchandise. He also began researching exactly what made people buy a particular product.

Handy left the Tribune to do further work on corporate communications. He worked with John H. Patterson of National Cash Register, who had used slides to help train workers. With help from another associate, Handy began making and distributing films that showed consumers how to operate everyday products. After World War I broke out, Handy began making films to show how to operate military equipment. During this time the Jam Handy Organization was formed. 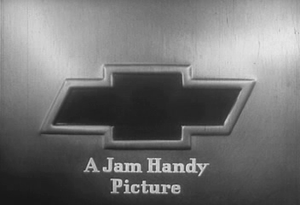 End of the 1930s Chevrolet films, produced by the Jam Handy Organization

General Motors selected Handy's organization to produce short training films as well as other training and promotional materials. One such film was Hired! – a training film for sales managers at Chevrolet dealerships. This film was eventually featured as two parts on the Mystery Science Theater 3000 episodes Bride of the Monster and Manos: The Hands of Fate. The Mystery Science Theater 3000 team also spoofed the Handy film short, "A Case of Spring Fever" during the Squirm episode, one of the final shows for the entire MST3K series. Many films produced by the Jam Handy Organization were collected by Prelinger Archives and may be seen and downloaded at the Internet Archive.

Handy also produced films for other companies and for schools. He's estimated to have produced over 7,000 films for the armed services during World War II. Handy was noted for taking only a one-percent profit on the films, while he could have taken as much as seven percent. He was noted for never having a desk at work, instead using any available work space. Handy's suits didn't have pockets, as he thought they were a waste of time.

Despite Handy's troubles with the University of Michigan, his son-in-law Max Mallon, granddaughter Susan Webb, and great-granddaughter Kathryn Tullis received degrees from the school. Handy would receive an honorary doctorate from Eastern Michigan University. He also continued swimming on a regular basis until just a few days before his death.

Handy's personal papers are housed at the Burton Historical Collection at the Detroit Public Library. His family and ancestry are featured in a historical collection[7] held at the William L. Clements Library[8] at the University of Michigan. The Clements Library also published a book titled Annals and Memorials of the Handys and Their Kindred by Isaac W.K. Handy, edited by Mildred Handy Ritchie and Sarah Rozelle Handy Mallon (Ann Arbor, 1992).[9]