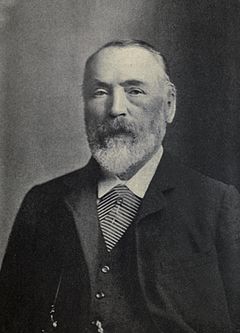 Henry Du Pré Labouchère (9 November 1831 – 15 January 1912) was an English politician, writer, publisher and theatre owner in the Victorian and Edwardian eras. He lived with the actress Henrietta Hodson from 1868, and they married in 1887.[1]

Labouchère, who inherited a large fortune, engaged in a number of occupations. He was a junior member of the British diplomatic service, a member of parliament in the 1860s and again from 1880 to 1906, and edited and funded his own magazine, Truth. He is remembered for the Labouchère Amendment to British law, which for the first time made all male homosexual activity a crime.

Unable to secure the senior positions to which he thought himself suitable, Labouchère left Britain and retired to Italy.

Labouchère was born in London to a family of Huguenot extraction. His father, John Peter Labouchère (d. 1863), a banker, was the second son of French parents who had settled in Britain in 1816.[2] His mother, Mary Louisa née Du Pré (1799–1863) was from an English family.[3] Labouchère was the eldest of their three sons and six daughters.[4] He was the nephew of the Whig politician Henry Labouchere, 1st Baron Taunton, who, despite disapproving of his rebellious nephew, helped the young man's early career and left him a sizeable inheritance when he died leaving no male heir.[5] 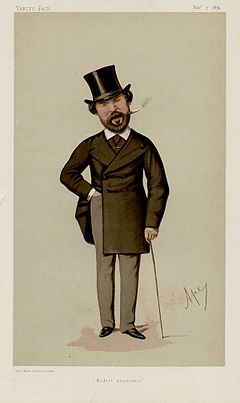 Caricature by Ape in Vanity Fair, 1874

Labouchère was educated at Eton and Trinity College, Cambridge,[6] where, he later said, he "diligently attended the racecourse at Newmarket," losing £6,000 in gambling in two years.[7] He was accused of cheating in an examination and his degree was withheld.[8] He left Cambridge and went travelling in Europe, South America and the United States.[9] While he was in the US, Labouchère (without his prior knowledge) was found a place in the British diplomatic service by his family. Between 1854 and 1864, Labouchère served as a minor diplomat in Washington, Munich, Stockholm, Frankfurt, St. Petersburg, Dresden, and Constantinople. He was, however, not known for his diplomatic demeanour, and acted impudently on occasion.[5] He went too far when he wrote to the Foreign Secretary to refuse a posting offered to him, "I have the honour to acknowledge the receipt of your Lordship's despatch, informing me of my promotion as Second Secretary to Her Majesty's Legation at Buenos Ayres. I beg to state that, if residing at Baden-Baden I can fulfil those duties, I shall be pleased to accept the appointment." He was politely told that there was no further use for his services.[10]

The year after his dismissal, Labouchère was elected at the 1865 general election as a member of parliament (MP) for Windsor,[11] as a Liberal. However, that election was overturned on petition,[5] and in April 1867 he was elected at a by-election as an MP for Middlesex.[12] At the 1868 election he narrowly lost his seat, winning only 90 votes less than his Conservative opponent's total of 6,487.[13] Labouchère did not return to the House of Commons for 12 years.[5]

In 1867, Labouchère and his partners engaged the architect C. J. Phipps and the artists Albert Moore and Telbin to remodel the large St. Martins Hall to create Queen's Theatre, Long Acre.[14] A new company of players was formed, including Charles Wyndham, Henry Irving, J. L. Toole, Ellen Terry, and Henrietta Hodson. By 1868, Hodson and Labouchère were living together out of wedlock,[15] as they could not marry until her first husband died in 1887.[16] Labouchère bought out his partners and used the theatre to promote Hodson's talents;[17] the theatre made a loss, Hodson retired, and the theatre closed in 1879. The couple finally married in 1887.[1] Their one child together, Mary Dorothea (Dora) Labouchère, had been born in 1884 and later was a daughter-in-law of Emanuele Ruspoli, 1st Prince of Poggio Suasa. Hodson's cousin was the theatre producer George Musgrove.[18] 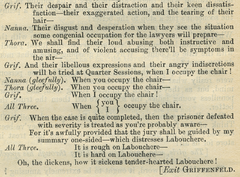 Third verse of "When a gentleman supposes" from His Excellency by W. S. Gilbert.

During the break in his Parliamentary career, Labouchère gained renown as a journalist, editor, and publisher, sending witty dispatches from Paris during the siege in 1870. His unflinching style gained a large audience for first his reporting, and later his personal weekly journal, Truth (started in 1877), which was often sued for libel.[19] With his inherited wealth, he could afford to defend such suits.[5] Labouchère's claims to being impartial were ridiculed by his critics, including W. S. Gilbert (who had been an object of Labouchère's theatrical criticism) in Gilbert's comic opera His Excellency (see illustration at right). In 1877, Gilbert had engaged in a public feud with Labouchère's lover, Henrietta Hodson.[20]

Labouchère was a vehement opponent of feminism; he campaigned in Truth against the suffrage movement, ridiculing and belittling women who sought the right to vote.[21] He was also a virulent anti-semite, opposed to Jewish participation in British life, using Truth to campaign against "Hebrew barons" and their supposedly excessive influence, "Jewish exclusivity" and "Jewish cowardice".[21] One of the victims of his attacks was Edward Levy-Lawson, proprietor of The Daily Telegraph.[21] In 1879 there was a much-reported court case following a fracas on the doorstep of the Beefsteak Club between Labouchère and Levy-Lawson. The committee of the club expelled Labouchère, who successfully sought a court ruling that they had no right to do so.[22] 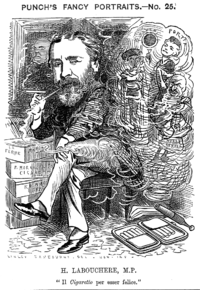 Labouchère returned to Parliament in the 1880 election, when he and Charles Bradlaugh, both Liberals, won the two seats for Northampton. (Bradlaugh's then-controversial atheism led Labouchère, a closet agnostic, to refer sardonically to himself as "the Christian member for Northampton".)[5]

In 1884, Labouchère unsuccessfully proposed legislation to extend the existing laws against cruelty to animals.[23] In 1885, Labouchère, whose libertarian stances did not preclude a fierce homophobia,[5] drafted the Labouchère Amendment as a last-minute addition to a Parliamentary Bill that had nothing to do with homosexuality.[n 1] His amendment outlawed "gross indecency"; sodomy was already a crime, but Labouchère's Amendment now criminalised any sexual activity between men.[n 2] Ten years later the Labouchère Amendment allowed for the prosecution of Oscar Wilde, who was given the maximum sentence of two years' imprisonment with hard labour.[5] Labouchère expressed regret that Wilde's sentence was so short, and would have preferred the seven-year term he had originally proposed in the Amendment.[5] 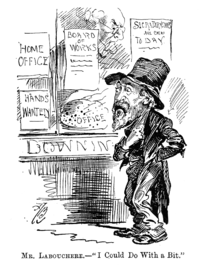 1892 political cartoon of Henry Labouchère as a hungry tramp, with Gladstone eyeing him grimly from within the parliamentary bakery.

During the 1880s, the Liberal Party faced a split between a Radical wing (led by Joseph Chamberlain) and a Whig wing (led by the Marquess of Hartington), with its party leader, William Ewart Gladstone straddling the middle. Labouchère was a firm and vocal Radical, who tried to create a governing coalition between the Radicals and the Irish Nationalists that would exclude or marginalise the Whigs. This plan was wrecked in 1886, when, after Gladstone came out for Home Rule, a large contingent of both Radicals and Whigs chose to leave the Liberal Party to form a "Unionist" party allied with the Conservatives.[5]

Between 1886 and 1892, a Conservative government was in power, and Labouchère worked tirelessly to remove them from office. When the government was turned out in 1892, and Gladstone was called to form an administration, Labouchère expected to be rewarded with a cabinet post. Queen Victoria refused to allow Gladstone to offer Labouchère an office, however (he had insulted the Royal Family). According to the historian Vernon Bogdanor, this was the last time a British monarch vetoed a prime minister's appointment of a cabinet minister.[28][n 3] Likewise, the new foreign secretary, Lord Rosebery, a personal enemy of Labouchère, declined to offer him the ambassadorship to Washington for which Labouchère had asked.[5]

In 1897, Labouchère was accused in the press of share-rigging, using Truth to disparage companies, advising shareholders to dispose of their shares and, when the share prices fell as a result, buying them himself at a low price. When he failed to reply to the accusations, his reputation suffered accordingly.[31] After being snubbed for a second time by the Liberal leadership after their victory in the 1906 election, Labouchère resigned his seat and retired to Florence. He died there seven years later, leaving a fortune of some two million pounds sterling to his daughter Dora, who was by then married to Carlo, Marchese di Rudini.[5]