For the writer and publisher (his nephew), see Henry Labouchère

Labouchere /læbuːˈʃɛər/ was born in Over Stowey, Somerset, into a Huguenot merchant family.[1] His father was Peter Caesar Labouchere and his mother Dorothy Elizabeth, daughter of Sir Francis Baring. He was educated at Winchester College and Christ Church, Oxford, where he took his B.A. (1821) and his M.A. (1828).[1]

In 1826, Labouchere became MP for St Michael, as a Whig.[1] In 1830, he moved to the Taunton seat, which he held until 1859. In 1835 he was opposed by Benjamin Disraeli for the Taunton seat; Labouchere won by 452 votes to 282. He was first appointed to office by Lord Grey in 1832, serving as Civil Lord of the Admiralty.[1] After beginning the second Melbourne ministry as Master of the Mint, Privy Counsellor, and Vice-President of the Board of Trade (and, later, Under-Secretary of State for War and the Colonies), Labouchere was raised to a cabinet post, President of the Board of Trade, which he held from 1839 until the Melbourne government fell in 1841.[1] 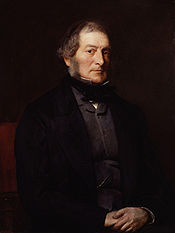 When the Whigs, now led by Lord John Russell, returned to office in 1846, Labouchere returned to the cabinet, this time as Chief Secretary for Ireland. The following year, he once again became President of the Board of Trade, and stayed in that post until Russell's government fell in 1852.[1] From 1853 to 1854 he sat on the Royal Commission on the City of London.[2] Labouchere's final cabinet posting came during the first Palmerston ministry, for which he served as Secretary of State for the Colonies from 1855 to 1858.[1] In 1859, Labouchere was raised to the peerage as Baron Taunton, of Taunton in the County of Somerset.[3][4]

In 1840 Labouchere married his first cousin Frances, daughter of Sir Thomas Baring. They had three daughters, one of whom was Emily Labouchere (1844-1933) who married Henry, 5th Earl of St Germans, Mina Francis, who married Sir Arthur Ellis, and Mary Dorothy; Frances snr died in 1850, aged 36. In 1852 he married Lady Mary Howard (1823–1892) daughter of the Earl of Carlisle. There were no children from this marriage.[1]

Taunton died in July 1869, aged 70, at his London house in Belgrave Square.[1] He was buried near his country house Quantock Lodge at Over Stowey. As he had no sons the barony became extinct on his death.[1] His nephew, also Henry Labouchere, inherited part of Labouchere's fortune, and was later to become a well-known newspaper editor and politician.[1]