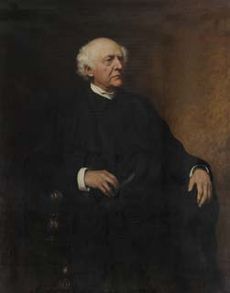 Henry Liddell, in an 1891 portrait by Sir Hubert von Herkomer.

Henry George Liddell (/ˈlɪdəl/; 6 February 1811 – 18 January 1898) was dean (1855–91) of Christ Church, Oxford, Vice-Chancellor of Oxford University (1870–74), headmaster (1846–55) of Westminster School[1] (where a house is now named after him), author of A History of Rome (1855), and co-author (with Robert Scott) of the monumental work A Greek-English Lexicon,[2] known as "Liddell and Scott", which is still widely used by students of Greek. Lewis Carroll wrote Alice's Adventures in Wonderland for Henry Liddell's daughter Alice. 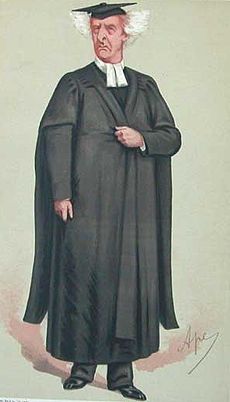 Liddell received his education at Charterhouse and Christ Church, Oxford. He gained a double first degree in 1833, then became a college tutor, and was ordained in 1838.

Liddell was Headmaster of Westminster School from 1846 to 1855. Meanwhile his life work, the great Lexicon (based on the German work of Franz Passow), which he and Robert Scott began as early as 1834, had made good progress, and the first edition of Liddell and Scott's Lexicon appeared in 1843. It immediately became the standard Greek-English dictionary, with the 8th edition published in 1897.

As Headmaster of Westminster Liddell enjoyed a period of great success, followed by trouble due to the outbreak of fever and cholera in the school. In 1855 he accepted the deanery of Christ Church, Oxford. In the same year he brought out his History of Ancient Rome and took a very active part in the first Oxford University Commission. His tall figure, fine presence and aristocratic mien were for many years associated with all that was characteristic of Oxford life. Coming just at the transition period when the "old Christ Church," which Pusey strove so hard to preserve, was inevitably becoming broader and more liberal, it was chiefly due to Liddell that necessary changes were effected with the minimum of friction. In 1859 Liddell welcomed the then Prince of Wales when he matriculated at Christ Church, being the first holder of that title who had matriculated since Henry V. While he was Dean of Christ Church, he arranged for the building of a new choir school and classrooms for the staff and pupils of Christ Church Cathedral School on its present site. Before then the school was housed within Christ Church itself.

In July 1846, Liddell married Miss Lorina Reeve (died 1910), with whom he had several children, including Alice Liddell of Lewis Carroll fame.

In conjunction with Sir Henry Acland, Liddell did much to encourage the study of art at Oxford, and his taste and judgment gained him the admiration and friendship of Ruskin. In 1891, owing to advancing years, he resigned the deanery. The last years of his life were spent at Ascot, where he died on 18 January 1898. Two roads in Ascot, Liddell Way and Carroll Crescent honour the relationship between Henry Liddell and Lewis Carroll.

Liddell was an Oxford “character” in later years. He figures in contemporary undergraduate doggerel:[3]

“I am the Dean, this Mrs Liddell.

She plays first, I, second fiddle.
She is the Broad,
I am the High –
We are the University.”

Media related to Script error: No such module "Commons link". at Wikimedia Commons