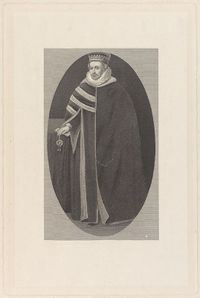 The 1st Earl of Manchester.

He was the son of Edward Montagu of Boughton and grandson of Sir Edward Montagu, Lord Chief Justice of the King's Bench from 1539 to 1545, who was named by King Henry VIII one of the executors of his will, and governor to his son, Edward VI.

He was born at Boughton, Northamptonshire, about 1563. Henry was educated at Christ's College, Cambridge,[2] and, having been called to the bar, was elected recorder of London in 1603, and in 1616 was made Chief Justice of the King's Bench, in which office it fell to him to pass sentence on Sir Walter Raleigh in October 1618.

In 1620, he was appointed Lord High Treasurer, being raised to the peerage as Baron Montagu of Kimbolton, Huntingdonshire, and Viscount Mandeville. He became President of the Council in 1621, in which office he was continued by Charles I, who created him Earl of Manchester in 1626. In 1628, he became Lord Privy Seal, and in 1635 a commissioner of the treasury. Although from the beginning of his public life in 1601, when he first entered Parliament, Manchester had inclined to the popular side in politics, he managed to retain to the end the favour of the King. He was a judge of the Star Chamber, and one of the most trusted councillors of Charles I. His loyalty, ability, and honesty were warmly praised by Clarendon. In conjunction with Coventry, the Lord Keeper, he pronounced an opinion in favour of the legality of ship money in 1634. He died on 7 November 1642.

He was succeeded by his eldest son, Edward Montagu, Viscount Mandeville, from his first marriage. The second son of Henry and Catherine was Walter Montagu, the courtier and abbot.[3]

One of his sons by his third wife, Margaret Crouch, was George Montagu, father of Charles Montagu, created Earl of Halifax in 1699, and James Montagu, Attorney General from 1708 to 1710.