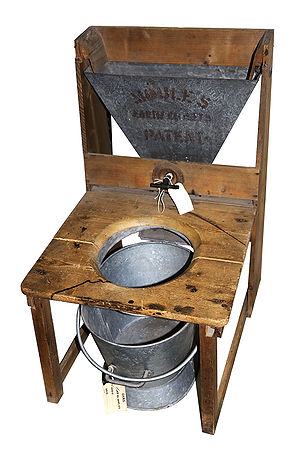 Henry Moule's dry earth closet, which he first patented in 1873. This example is from around 1875

Moule, sixth son of George Moule, solicitor and banker, was born at Melksham, Wiltshire, on 27 January 1801, and educated at Marlborough Grammar School. He was elected a foundation scholar of St John's College, Cambridge, and graduated B.A. 1821 and M.A. 1826.[1] He was ordained to the curacy of Melksham in 1823, and took sole charge of Gillingham, Dorset, in 1825. He was made vicar of Fordington in the same county in 1829, and remained there for the remainder of his life.

For some years he undertook the duty of chaplain to the troops in Dorchester barracks, for whose use, as well as for a detached district of his own parish, he built in 1846, partly from the proceeds of his published ‘Barrack Sermons,’ 1845 (2nd edit. 1847), a church known as Christ Church, West Fordington. In 1833 his protests brought to an end the evils connected with the race meetings at Dorchester. 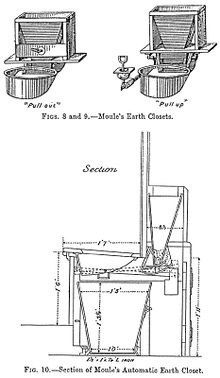 During the cholera epidemics of 1849 and 1854 his exertions were unwearied. Impressed by the insalubrity of the houses, especially in the summer of 1858 (the Great Stink) he turned his attention to sanitary science, and invented what is called the dry earth system. In partnership with James Bannehr, he took out a patent for the process (No. 1316, dated 28 May 1860). Among his works bearing on the subject were: ‘The Advantages of the Dry Earth System,’ 1868; ‘The Impossibility overcome: or the Inoffensive, Safe, and Economical Disposal of the Refuse of Towns and Villages,’ 1870; ‘The Dry Earth System,’ 1871; ‘Town Refuse, the Remedy for Local Taxation,’ 1872, and ‘National Health and Wealth promoted by the general adoption of the Dry Earth System,’ 1873.
His system was adopted in private houses, in rural districts, in military camps, in many hospitals, and extensively in the British Raj.

He also wrote an important work, entitled ‘Eight Letters to Prince Albert, as President of the Council of the Duchy of Cornwall,’ in 1855, prompted by the condition of Fordington parish, belonging to the duchy. In two letters in the Times of 24 February and 2 April 1874 he advocated a plan for extracting gas from Kimmeridge shale. He died at Fordington vicarage on February 3, 1880.

In addition to the works already mentioned, and many single sermons and pamphlets, Moule wrote