Henry Pelham (25 September 1694 – 6 March 1754) was a British Whig statesman, who served as Prime Minister of Great Britain from 27 August 1743 until his death. He was the younger brother of Thomas Pelham-Holles, the Duke of Newcastle-under-Lyne, who succeeded Henry as Prime Minister. He is generally considered to have been Britain's third Prime Minister after Sir Robert Walpole and Earl of Wilmington.

For the first year of Pelham's premiership, real power was held by the Secretary of State for the Northern Department, Lord Carteret, who headed the Carteret Ministry (Pelham was First Lord of the Treasury, Chancellor of the Exchequer and Leader of the House of Commons). Thereafter, he shared power with his brother, the Duke of Newcastle-upon-Tyne. This period was relatively uneventful in terms of domestic affairs (Great Britain fought in several wars, however). Upon his death, his brother took full control of the ministry.

Pelham, Newcastle's younger brother, was a younger son of the Thomas Pelham, 1st Baron Pelham and his wife, the former Lady Grace Holles, daughter of Gilbert Holles, 3rd Earl of Clare and Grace Pierrepont. He was educated at Westminster School and Hart Hall, Oxford. Hertford College Oxford, the present-day incarnation of Hart Hall, still honours him in the title of its most prestigious drinking club, the Sir Henry Pelham Gentlemen's Sporting Society. As a volunteer he served in Dormer's regiment at the Battle of Preston in 1715, spent some time on the Continent, and in 1717 entered Parliament for Seaford in Sussex which he represented until 1722. 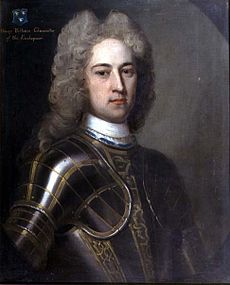 Through strong family influence, and the recommendation of Robert Walpole, he was chosen in 1721 as Lord of the Treasury. The following year he was returned for Sussex county. In 1724 he entered the ministry as Secretary at War, but this office he exchanged in 1730 for the more lucrative one of Paymaster of the Forces. He made himself conspicuous by his support of Walpole on the question of the excise. He, Newcastle, and the Prime Minister would often meet at Houghton Hall in Norfolk, where they would draw up much of the country's policy. These meetings became known as the Norfolk Congress. With Walpole, he served as a founding governor of the popular charity the Foundling Hospital when it opened its doors in 1739.

In 1742 a union of parties resulted in the formation of an administration in which Pelham became Prime Minister the following year, with the offices of First Lord of the Treasury, Chancellor of the Exchequer and Leader of the House of Commons. The following year Carteret was forced out of the ministry and Pelham was regarded as the leading figure, but rank and influence made his brother very powerful in the Cabinet, and, in spite of a genuine attachment, there were occasional disputes between them, which led to difficulties.

Being strongly in favour of peace, Pelham carried on the War of the Austrian Succession with languor and indifferent success, but the country, wearied of the interminable struggle, was disposed to acquiesce in his foreign policy almost without a murmur. King George II, thwarted in his own favourite schemes, made overtures in 1746 to Lord Bath, but his purpose was upset by the resignation of the two Pelhams (Henry and Newcastle), who, after a two-day hiatus in which Bath and Carteret (now earl Granville) proved unable to form a ministry, resumed office at the king's request. 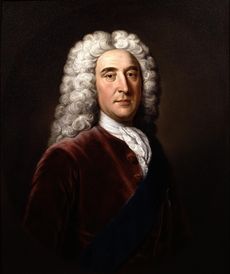 Pelham's brother the Duke of Newcastle with whom he enjoyed a prodigious political partnership, despite their occasional personal disagreements. Newcastle ultimately succeeded him as Prime Minister in 1754.

In 1749, the Consolidation Act was passed, reorganising the Royal Navy. On 20 March 1751, the British calendar was reorganised as well (New Year's Day became 1 January); Britain would adopt the Gregorian calendar one year later. Two of Pelham's final acts were the Jew Act of 1753, which allowed Jews to become naturalized by application to Parliament, and the Marriage Act of 1753, which enumerated the minimum age of consent for marriage. Upon his death, his brother (the aforementioned Duke of Newcastle-upon-Tyne) took over government.

His very defects were among the chief elements of Pelham's success, for one with a strong personality, moderate amount self-respect, or haughty conceptions of statesmanship could not have restrained the discordant elements of the cabinet for any length of time the way he did. Moreover, he possessed tact and a thorough acquaintance with the forms of the House of Commons. Whatever quarrels or insubordination might have existed within the cabinet, they never broke out into open revolt. His financial policy was worthy of praise, especially his plans for the reduction of the national debt and the simplification and consolidation of different government branches related to this debt.

Pelham had married Lady Catherine Manners, daughter of the John Manners, 2nd Duke of Rutland, in 1726. They had four daughters:

When Pelham was elevated to Prime Minister, he began construction of a house located at 22 Arlington Street in St. James's, a district of the City of Westminster in central London. He hired the architect William Kent to build the structure in two phases.[2] Kent died in 1748[3] and the work was completed by completed by Stephen Wright[4] in 1754.[2]

Pelham was buried in All Saints' Church, Laughton, East Sussex.[5]

Pelham's personal papers were inherited by his son-in-law and now form part of the Newcastle (Clumber) Collection held at the department of Manuscripts and Special Collections, The University of Nottingham. Pelham was the first British Prime Minister who never acceded to the peerage in his lifetime.

Pelham was portrayed by actor Roger Allam in the 2011 film Pirates of the Caribbean: On Stranger Tides.