From Infogalactic: the planetary knowledge core
Jump to: navigation, search
For other people of the same name, see Henry Percy (disambiguation).

Sir Henry Percy KG (20 May 1364 – 21 July 1403), commonly known as Sir Harry Hotspur, or simply Hotspur, was a late medieval English nobleman. He was known as one of the most valiant knights of his day[by whom?] and a significant captain during the Anglo-Scottish wars. He later led successive rebellions against Henry IV of England and was slain at the Battle of Shrewsbury in 1403 at the height of his career.

Henry Percy was born 20 May 1364 at either Alnwick Castle or Warkworth Castle in Northumberland, the eldest son of Henry Percy, 1st Earl of Northumberland, and Margaret Neville, daughter of Ralph de Neville, 2nd Lord Neville of Raby, and Alice de Audley.[1] He was knighted by King Edward III in April 1377, together with the future Kings Richard II and Henry IV.[2] In 1380, he was in Ireland with the Earl of March,[3] and in 1383, he travelled in Prussia.[4] He was appointed warden of the east march either on 30 July 1384 or in May 1385,[4] and in 1385, accompanied Richard II on an expedition into Scotland.[1] 'As a tribute to his speed in advance and readiness to attack' on the Scottish borders, the Scots bestowed on him the name 'Haatspore'.[2] In April 1386, he was sent to France to reinforce the garrison at Calais and led raids into Picardy. Between August and October 1387, he was in command of a naval force in an attempt to relieve the siege of Brest.[4] In appreciation of these military endeavours he was made a Knight of the Garter in 1388.[4] Reappointed as warden of the east march, he commanded the English forces against James Douglas, 2nd Earl of Douglas, at the Battle of Otterburn on 10 August 1388, where he was captured, but soon ransomed for a fee of 7000 marks.[2]

During the next few years Percy's reputation continued to grow. He was sent on a diplomatic mission to Cyprus in June 1393 and appointed Governor of Bordeaux, deputy to John of Gaunt, 1st Duke of Lancaster, in the Duchy of Aquitaine.[2] He returned to England in January 1395, taking part in Richard II's expedition to Ireland, and was back in Aquitaine the following autumn. In the summer of 1396, he was again in Calais.[3]

Percy's military and diplomatic service brought him substantial marks of royal favour in the form of grants and appointments,[4] but despite this, the Percy family decided to support Henry Bolingbroke, the future Henry IV, in his rebellion against Richard II. On Henry's return from exile in June 1399, Percy and his father joined his forces at Doncaster and marched south with them. After King Richard's deposition, Percy and his father were 'lavishly rewarded' with lands and offices.[3]

Under the new king, Percy had extensive civil and military responsibility in both the east march towards Scotland and in north Wales, where he was appointed High Sheriff of Flintshire in 1399. In north Wales, he was under increasing pressure as a result of the rebellion of Owain Glyn Dŵr. In March 1402, Henry IV appointed Percy royal lieutenant in north Wales, and on 14 September 1402, Percy, his father, and the Earl of Dunbar and March were victorious against a Scottish force at the Battle of Homildon Hill. Among others, they made a prisoner of Archibald Douglas, 4th Earl of Douglas.[1]

In spite of the favour that Henry IV showed the Percys in many respects, they became increasingly discontented with him. Among their grievances was the king's failure to pay the wages due to them for defending the Scottish border; his favour towards Dunbar; his demand that the Percys hand over their Scottish prisoners; his failure to put an end to Owain Glyn Dŵr's rebellion through a negotiated settlement; his increasing promotion of his son Prince Henry's military authority in Wales; and his failure to ransom Henry Percy's brother-in-law Sir Edmund Mortimer, whom the Welsh had captured in June 1402.[5]

Spurred on by these grievances, the Percys rebelled in the summer of 1403 and took up arms against the king. According to J. M. W. Bean, it is clear that the Percys were in collusion with Glyndŵr. On his return to England shortly after the victory at Homildon Hill, Henry Percy issued proclamations in Cheshire accusing the king of 'tyrannical government'.[3] Joined by his uncle, Thomas Percy, Earl of Worcester, he marched to Shrewsbury, where he intended to do battle against a force there under the command of the Prince of Wales. The army of his father, however, was slow to move south as well, and it was without the assistance of his father that Henry Percy and Worcester arrived at Shrewsbury on 21 July 1403, where they encountered the king with a large army. The ensuing Battle of Shrewsbury was fierce, with heavy casualties on both sides, but when Henry Percy himself was struck down and killed, his own forces fled.[3]

The circumstances of Percy's death differ in accounts. The chronicler Thomas Walsingham stated, in his Historia Anglicana, that while he led his men in the fight rashly penetrating the enemy host, [Hotspur] was unexpectedly cut down, by whose hand is not known. Another is that he was struck in the face by an arrow when he opened his vizor for a better view.[6] The legend that he was killed by the Prince of Wales seems to have been given currency by William Shakespeare, writing at the end of the following century.

The Earl of Worcester was executed two days later.[7]

King Henry, upon being brought Percy's body after the battle, is said to have wept. The body was taken by Thomas Neville, 5th Baron Furnivall, to Whitchurch, Shropshire, for burial. However, when rumours circulated that Percy was still alive, the king 'had the corpse exhumed and displayed it, propped upright between two millstones, in the market place at Shrewsbury'.[3] That done, the king dispatched Percy's head to York, where it was impaled on the Micklegate Bar (one of the city's gates), whereas his four-quarters were sent to London, Newcastle upon Tyne, Bristol, and Chester before they were finally delivered to his widow. She had him buried in York Minster in November of that year.[8] In January 1404, Percy was posthumously declared a traitor, and his lands were forfeited to the Crown.[citation needed]

Henry Percy married Elizabeth Mortimer, the eldest daughter of Edmund Mortimer, 3rd Earl of March, and his wife, Philippa, the only child of Lionel, 1st Duke of Clarence, and Elizabeth de Burgh, Countess of Ulster.[9] By her had two children:

Sometime after 3 June 1406, Elizabeth Mortimer married, as her second husband, Thomas de Camoys, 1st Baron Camoys, by whom she had a son, Sir Roger Camoys.[12] Thomas Camoys distinguished himself as a soldier in command of the rearguard of the English army at the Battle of Agincourt on 25 October 1415.[13] 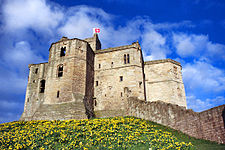 Henry Percy, 'Hotspur', is one of Shakespeare's best-known characters. In Henry IV, Part 1, Percy is portrayed as the same age as his rival, Prince Hal, by whom he is slain in single combat. In fact, he was 23 years older than Prince Hal, the future King Henry V, who was a youth of 16 at the date of the Battle of Shrewsbury.

The name of one of England's top football clubs, Tottenham Hotspur F.C., acknowledges Henry Percy, whose descendants owned land in the neighbourhood of the club's first ground in the Tottenham Marshes.[14][15][16]