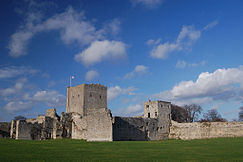 Portchester Castle, where the Southampton plot was revealed to King Henry V

In 1390 Scrope accompanied John Beaufort, half-brother of the future King Henry IV, on the Barbary Crusade to Mahdia, but otherwise little is known of his early life.[4] An annuity granted to him by King Richard II was continued by Henry IV after Richard's deposition, and in 1403 Scrope was styled 'king's knight', and fought on Henry IV's side at the Battle of Shrewsbury.[5] His uncle, Richard Scrope, Archbishop of York, was executed on 8 June 1405 for taking part in the Northern Rising against the King;[6] however Henry Scrope was not involved in his uncle's failed rebellion, and was serving the King in Wales when he inherited his father's title and lands in 1406.[7] In 1408 he accompanied Henry IV's daughter, Philippa, to Denmark for her marriage,[8] and in 1409 went to Paris on a diplomatic mission with Henry IV's half-brother, Henry Beaufort.[9]

According to Tait, it was during this period that Scrope came to enjoy the friendship and confidence of the future Henry V, by whose influence he was appointed Treasurer of England in 1410, and made a Knight of the Garter in the same year.[10]

Henry V succeeded his father in 1413, and in 1413 Scrope was sent on several diplomatic missions.[11] In 1414 he accompanied Bishop Henry Chichele to Burgundy to negotiate an alliance.[12]

In 1415 Henry V determined to invade France, and in February 1415 Scrope attended a council meeting held for the purpose of planning the forthcoming expedition. However on 27 May 1415 Scrope was absent from the council meeting for no apparent reason.[13] On 31 July Edmund Mortimer, 5th Earl of March informed King Henry that he had just become aware of a plot to murder Henry and put himself on the throne.

Mortimer was the great-grandson of Lionel of Antwerp, 1st Duke of Clarence, second surviving son of King Edward III, and his claim to the throne was thus superior to that of Henry V and his father, Henry IV, who derived their claim from Henry IV's father, John of Gaunt, 1st Duke of Lancaster, third surviving son of Edward III. Moreover Edmund Mortimer's father, Roger Mortimer, 4th Earl of March, had been widely considered heir presumptive to King Richard II, who had no issue, and Edmund Mortimer himself had been heir presumptive to Richard II while a young child.[14]

The three ringleaders of the plot were Edmund Mortimer's brother-in-law, Richard of Conisburgh, 3rd Earl of Cambridge, Sir Thomas Grey, whose son, Thomas, had been betrothed in 1412 to Cambridge's only daughter, Isabel[15] and Scrope himself.

Richard, Scrope, and Grey were promptly arrested. The trial took place in Southampton, on the site now occupied by the Red Lion Inn. Grey was beheaded on 2 August 1415. The most degrading punishment was reserved for Scrope, perhaps because he had been a royal favourite. Prior to his execution, Scrope was dragged across Southampton from the Watergate to the north gate, where he and Cambridge were beheaded on 5 August 1415. Scrope's head was sent to York, to be put on a spike on Micklegate Bar.

Scrope's involvement in the conspiracy surprised contemporaries, and continues to puzzle historians. Ian Mortimer claims Scrope had merely insinuated himself into the confidence of Cambridge and Grey in order to betray the conspiracy, just as Edward, Duke of York had done with the Epiphany Rising in 1400, but was forestalled by Edmund Mortimer's revelation of the conspiracy to the King on 31 July.[16][citation needed] Pugh, however, finds Scrope's exculpatory statements at trial unconvincing, and states that Scrope never pretended that he had intended to inform the King of the conspiracy.[17] Pugh also contends that "there was no plot in 1415 to assassinate Henry V and his three brothers and that heinous charge, by far the most sensational in the indictment, was fabricated to ensure that Cambridge, Gray and Scrope did not escape the death penalty as a well-deserved punishment for the various other offences that they undoubtedly had committed".[18]

The Southampton Plot is dramatized in Shakespeare's Henry V, and in the anonymous play, The History of Sir John Oldcastle.

Joan was the sister of Eleanor Holland, Countess of March, mother of Edmund Mortimer, 5th Earl of March, who was the focus of the Southampton Plot.[20]

Scrope had no issue by either of his wives, and was succeeded by his brother, John Scrope, 4th Baron Scrope of Masham, who did not recover the forfeited Scrope lands until 1442.[21]