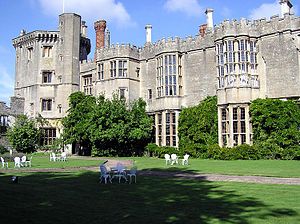 The west front of Thornbury Castle. The castle was begun in 1511 as a home for Henry Stafford's father, Edward Stafford, third Duke of Buckingham.

Henry Stafford, 1st Baron Stafford (18 September 1501 – 30 April 1563) was born in Penshurst, Kent, eldest son of Edward Stafford, 3rd Duke of Buckingham and Eleanor Percy, Duchess of Buckingham. Eleanor (or Alianore) was the daughter of Henry Percy, 4th Earl of Northumberland and Maud Herbert, Countess of Northumberland.[1] After his father's execution he managed to regain some of his family's position and he was created Baron Stafford in 1547.[2]

Stafford was born in Penshurst, Kent, England. He was one of four children, the only son. One of the main family residences was Thornbury, which had been in the family since 1087.[citation needed]

On 16 February 1519, Henry married Ursula Pole, the daughter of Margaret Pole, 8th Countess of Salisbury and Sir Richard Pole. The marriage had been arranged by the Duke of Buckingham, at the suggestion of Cardinal Thomas Wolsey.[3]

Ursula's dowry was 3,000 marks, which would be increased by 1,000 marks "if the Countess (of Salisbury) get back certain lands from the King".[4] The Countess settled lands in Somerset and Devon worth 700 marks on the couple and their children. In return, the Duke of Buckingham was required to set aside lands worth £500 as Ursula's jointure.[4] He also paid for the wedding expenses, apart from Ursula's wedding clothes which were provided by her mother.

Following their marriage, Henry and Ursula made their home in the household of the Duke of Buckingham, where they had guardians to watch over them.[5] In November 1520, their first child was born; they would have a total of seven sons and seven daughters.[5] The Duke paid a midwife 10 shillings to attend Ursula following the birth of the child.[5] The following year, 1521, his father, the Duke of Buckingham was beheaded for treason. He was posthumously attainted by an Act of Parliament in 1523, with his title and estates being forfeited to the Crown.

Henry and Ursula had a total of about fourteen children of whom twelve names are known:

He was styled Earl of Stafford until the attainder of his father in 1521. In 1547, Henry petitioned Parliament for restoration in blood, but did not claim any of his father's land or titles. He was summoned to Parliament by writ in 1548 and was thus created 1st Baron Stafford by Edward VI.[2]

This was the 4th creation of the barony which eventually became extinct in 1639, the title being resigned due to poverty. The barony was initially regarded as a new creation, but in February 1558, he won the right to have it recognised as carrying precedence from 1299. In 1554, after petitioning Mary for financial assistance, he was made one of two Chamberlains of the Exchequer, a position that brought with it £50.[citation needed]

In 1531, Staffordshire elected him as a recorder for the borough; he was later appointed JP for both Staffordshire and Shropshire in 1536. Between 1558 and 1559, he was the Lord-Lieutenant of Staffordshire, a role that also included being appointed as Clerk of the Peace [6]

Stafford had an extensive library of some 300 books, mostly Latin. In 1548, he published an English translation of the 1534 tract by Edward Foxe, as "The True Dyfferens Betwen the Royall Power and the Ecclesiasticall Power", (original title De vera differentia regiae potestatis et ecclesiae). Under Mary, with his reconversion to Catholicism he translated two tracts by Erasmus against Luther (neither survives). He commissioned other translations, such as Humphrey Lloyd's version of Vassaeus on urine, and influenced the publication of Mirror for Magistrates in 1559.[2]

Henry died on 30 April 1563, at the age of about 62, at Caus Castle in Shropshire.[2] He was buried in Worthen church nearby on 6 May. He was succeeded in his titles by his eldest surviving son, Henry as 2nd Baron Stafford, who himself died two years later.