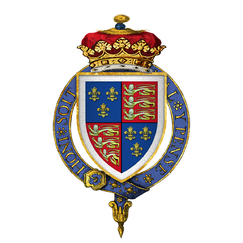 Henry Stafford, 2nd Duke of Buckingham, KG (4 September 1454 – 2 November 1483) played a major role in King Richard III's rise and fall.[1] He is also one of the primary suspects in the disappearance (and presumed murder) of the Princes in the Tower. Buckingham was related to the royal family of England in many different ways, but his connections were all through daughters of younger sons. His chances of inheriting the throne would have seemed remote, but he played the role of a 'kingmaker' for Richard III and, unsuccessfully, for Henry VII.

Buckingham was the son of Humphrey Stafford, Earl of Stafford, and Margaret Beaufort, Countess of Stafford. Three of his four grandparents were descended from Edward III of England:

His father, Humphrey Stafford, Earl of Stafford, supported the House of Lancaster in the initial phase of the Wars of the Roses. He died in 1458 of wounds after First Battle of St Albans, and his paternal grandfather, Humphrey Stafford, 1st Duke of Buckingham, another leading Lancastrian, was killed at the Battle of Northampton (10 July 1460). After his grandfather's death, Henry was recognized as Duke of Buckingham. The new Duke eventually became a ward of Queen Elizabeth Woodville, consort of Edward IV of England.

Sometime before the Queen's coronation in May 1465 he was married to her sister Catherine Woodville, Duchess of Buckingham and Bedford (b.1458). Both parties were children at the time; they were carried on squires' shoulders at the coronation ceremony and were reared in the queen's household together. According to Dominic Mancini, Buckingham resented his wife and the other Woodvilles because of his marriage to a woman of a lower status.

Nevertheless, the couple had four children:

When Edward IV died in 1483 and the Woodvilles struggled with Edward's brother Richard, Duke of Gloucester, over the guardianship of the young Edward V, Buckingham sided with Richard. Buckingham was with Richard when they took possession of the young King Edward V at Stony Stratford in April 1483.

Buckingham's motives in these events are unclear. His antipathy to Edward IV and his children probably arose from two causes. One was his dislike for their mutual Woodville in-laws, whom Edward greatly favoured. Another was his interest in the Bohun estate. Buckingham had inherited a great deal of property from his great-great-grandmother, Eleanor de Bohun, wife of Thomas of Woodstock and daughter of Humphrey de Bohun, Earl of Hereford, Essex and Northampton.

Eleanor's younger sister and co-heir Mary de Bohun married Henry Bolingbroke, who eventually became Henry IV, and her share of the de Bohun estates became incorporated into the holdings of the House of Lancaster. The House of Lancaster ruled England as Kings from 1399 to 1461. When Henry VI was deposed by Edward IV of the House of York, Edward appropriated that half into the Crown property. Humphrey's grandson Henry Stafford, 2nd Duke of Buckingham, claimed those lands should have devolved to him instead. Unsuccessful in regaining the property from Edward, he was awarded these lands by Richard III, pending approval of Parliament. This was probably one of Buckingham's motives in supporting Richard's accession as King.[2]

For more details on this topic, see Buckingham's rebellion.

In 1483, a conspiracy arose among a number of disaffected gentry, supporters of Edward IV. Buckingham, having by this time become disillusioned with Richard, started working with John Morton, Bishop of Ely. The conspirators originally planned to depose Richard and place Edward V back on the throne. When rumours arose that Edward and his brother (the Princes in the Tower) were dead, Buckingham intervened, proposing instead that Henry Tudor return from exile, take the throne, and marry Elizabeth of York. For his part, Buckingham would raise a substantial force from his estates in Wales and the Marches.[3]

Richard eventually put down the rebellion; Henry's ships ran into a storm and had to go back to Brittany. Henry's own ship was storm-driven to take shelter in a harbour of Jersey, an island of largely Yorkist sympathisers at that time, and Henry was given secret shelter for several days by the Lieutenant-Bailiff of Jersey, Clement Le Hardy, until the weather moderated, and Henry's ship could continue his return to Brittany. Meantime, Buckingham's army was greatly troubled by the same storm; and most of its members deserted when Richard's forces came against them.

Buckingham, once it became obvious to him that his alliance with Henry had no chance of overthrowing Richard, tried to escape in disguise. He sought sanctuary at the Abbey of Beaulieu in the New Forest. It could well be that he planned to arrange a sea-passage to Brittany, since the Beaulieu River was navigable down to the sea at that date, and Bucklers Hard was a seaport; but any such plans were unsuccessful. Richard had put a bounty on his head. As a result, he was quickly arrested, convicted of treason and, on 2 November at Salisbury, publicly beheaded. (A monument in nearby Britford Church has been identified as his.) Following Buckingham's execution, his widow, Catherine, married Jasper Tudor.

The Princes in the Tower

Richard III is alleged to have consolidated his power by eliminating his brother's children, who could even after their bastardisation serve as figureheads or incentives to rebellions. However, there is some question about Buckingham's involvement in the disappearance of the Princes in the Tower.

If Richard was responsible for killing the Princes, the murders may have caused Buckingham to change sides. On the other hand, Buckingham himself had motives to kill them; his own claim to the throne (which he held through the Beaufort line) was at least as strong as that of Henry. The hypothesis of Buckingham's guilt was postulated by American historian Paul Murray Kendall in his 1955 biography of Richard III.

A manuscript discovered in the early 1980s in the College of Arms collection states that the Princes were murdered "be [by] the vise" of the Duke of Buckingham. There is some argument over whether "vise" means "advice" or "devise".[4] According to this perspective, if Buckingham killed the Princes and blamed Richard for the murders, this would have given him a particularly strong pretext for subsequently leading the 1483 rebellion.