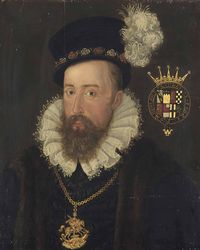 The 4th Earl of Derby. 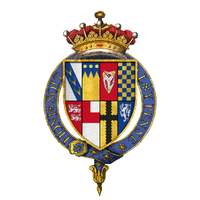 Henry Stanley, 4th Earl of Derby KG (September 1531 – 25 September 1593) was a prominent English nobleman, diplomat, and politician. He was an ambassador, Privy Councillor, and participated in the trials of Mary, Queen of Scots and the Earl of Arundel.

Born in Lathom, Henry was the eldest son of Edward Stanley, 3rd Earl of Derby and his second wife, Lady Dorothy Howard. His maternal grandparents were Thomas Howard, 2nd Duke of Norfolk and his wife Agnes Tilney (1478–1545), daughter of Hugh Tilney of Boston and Eleanor Tailboys.[1]

He was married on 7 February 1554 to Lady Margaret Clifford. She was the only surviving child of Henry Clifford, 2nd Earl of Cumberland and Lady Eleanor Brandon. The marriage took place in a chapel of the Palace of Whitehall and was attended by Queen Mary I of England and her consort Philip of Spain. They were relatives of the bride through her maternal grandmother Mary Tudor, former queen consort of France.

Henry and Margaret had four children in the next eight years, but then quarrelled and generally lived apart thereafter. From about 1570 he lived with Jane Halsall of Knowsley, with whom he had a further four children.[2]

His father died on 24 October 1572. Lord Derby inherited his peerages, the title Lord of Mann and the offices of Lord Lieutenant of Lancashire and Cheshire.

Elizabeth I of England created Derby a Knight of the Garter in 1574. He was created alongside Henry Herbert, 2nd Earl of Pembroke.

He was appointed ambassador to the court of Henry III of France in 1580. He was appointed to the Privy Council in 1585. He was among the chief officials of the trial of deposed Scottish monarch Mary, Queen of Scots, in 1586.

In 1588, he was part of a mission which tried to negotiate an end to the Anglo-Spanish War following the defeat of the Spanish Armada.

In 1589, Elizabeth appointed him Lord High Steward for the trial of Philip Howard, Earl of Arundel and Surrey. He returned to Lathom in retirement in 1592 and died there one or two years later.

Henry and Margaret were parents to four children:[3]

Henry was also father to at least four illegitimate children by Jane Halsall of Knowsley:[4]