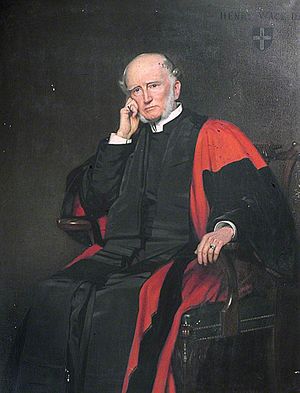 The Very Reverend Henry Wace (10 December 1836 – 9 January 1924) was Principal of King's College, London (1883–1897) and Dean of Canterbury (1903–1924). He is described in the Dictionary of National Biography as "an effective administrator, a Protestant churchman of deep scholarship, and a stout champion of the Reformation settlement".[1]

In 1875 he became Professor of Ecclesiastical History at King's College, London, of which he served as Principal (1883–97). He was Rector of St Michael's, Cornhill 1896-1903 and Dean of Canterbury from 1903 until his death in 1924. He is buried in the courtyard of the great cloister of the cathedral.

He wrote, contributed to, and edited, many publications in Christian and Ecclesiastical history. His best-known work, of widest application, is the Dictionary of Christian Biography and Literature to the End of the Sixth Century A.D., with an Account of the Principal Sects and Heresies, written in collaboration with William Smith.

From 1902 to 1905 he was editor of The Churchman, an evangelical Anglican academic journal.[2]

He was appointed Prebendary of St Paul's Cathedral in 1881 and received the honorary freedom of the City of Canterbury in 1921. In 1922 he played an important role in the foundation of the Bible Churchmen's Missionary Society and was its Vice-President from 1923 until his death on 9 January 1924, following a road traffic accident.[1]