Sir Henry Williams, alias Cromwell (died 1604) was a Knight of the Shire for Huntingdonshire and a grandfather of Oliver Cromwell.[1]

Sir Henry Williams, of Welsh descent, the eldest son and heir of Sir Richard Williams, was highly esteemed by Queen Elizabeth I, who knighted him in 1563,[2] and did him the honour of sleeping at his seat of Hinchingbrooke, on 18 August 1564, upon her return from visiting the University of Cambridge.[3]

He was in the House of Commons in 1563, as one of the Knights of the Shire for Huntingdonshire,[4] and was four times appointed Sheriff of Cambridgeshire and Huntingdonshire, by Elizabeth, viz. in the 7, 13, 22, and 34 years of her reign;[5] and in the 20, she nominated him a commissioner with others, to inquire concerning the draining of The Fens through Cloughs Cross and so to the sea.[6] 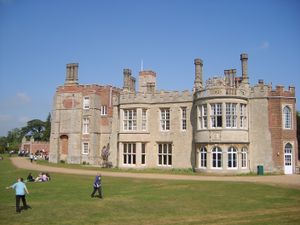 He made Huntingdonshire the entire place of his country residence, living at Ramsey Abbey in the summer, and Hinchingbrooke in the winter; he repaired, if not built the manor-house at Ramsey, and made it one of his seats. Mark Noble comments that he had heard that the house of Ramsey was only the lodge of that magnificent pile, and converted by Sir Henry into a dwelling-house.[7] Sir Henry also built Hinchingbrooke House adjoining to the nunnery at Hinchingbrooke,[8] and upon the bow windows there he put the arms of his family, with those of several others to whom he was allied.[9]

Sir Henry lived to a good old age, dying in the beginning of the year 1604. He was buried in All Saints' Church, in Huntingdon, on 7 January.[10] An indication of the funeral pomp used at his interment can be found by the charges of the heralds, which were the same as those incurred at the burial of some of the greatest knights of his day.[11]

Mark Noble stated that Sir William was called, from his liberality, the "golden knight"; and reported that in Ramsey it was said, that whenever Sir Henry came from Hinchingbrooke to that place, he threw considerable sums of money to the poor townsmen.[12] This excellent character is given of him, "he was a worthy gentleman, both in court and country, and universally esteemed";[13] and which his merit justly deserved. By the record of inquisitio post mortem, taken at Ramsey, 2 June, following his death, it appears that he died possessed of these manors in Huntingdonshire, Saltry, Saltry-Moynes, Saltry-Judith, Sawtry-Monastery, all valued at £60 per annum; Warboys and Whistow, with their rectories, and the New-red-deer Park, valued together at £40 per annum; Hinchingbrooke, valued at £10 per annum; Broughton or Broweton, with the rectory, valued at £20 per annum; Berry and Hepmangrove, and the rectory of Berry, valued at £20 per annum; the forefts of Waybridge, and Sapley, valued at £6 13s 4d; the farm or grange of Higney, and the messuage called the George, with the land belonging to it, valued at £10 per annum; and the manor of Ramsey, with the farm of Biggin, valued at £100 per annum. all of which were held of king by military service. except the forests of Waybridge and Sapley, together with the farm, or grange of Higney, the tenures of which were unknown.[14]

Sir Henry Williams married twice; first to Joan (grandmother to Oliver Cromwell) and daughter of Sir Ralph Warren, twice Lord Mayor of London;[15] she died at Hinchinbrooke, and was buried in All Saints' church, oft. 72, 1584.[16]

Some time after the death of Joan, Sir Henry married a lady of the name of Weeks, who bore for her arms azure a lion rampant cheeky argent and gules.[17] she was buried at All Saints', Huntingdon, 11 July 1592 but no monument remains of either Sir Henry or of his wives, or indeed any of the name of Cromwell in that place as Huntingdon was devastated during the Civil War and all the monuments and brass plates to the dead were either destroyed or looted.[18] Lady Weeks died of a lingering illness, which in that superstitious age was blamed on witchcraft. On 4 April 1593, in the court presided over by justice Fenner, John Samwell, his wife and daughter were found guilty of causing the death of Joan through witchcraft and executed a few days later.[19]

By the first marriage, Sir Henry had numerous progeny; by the latter, none. Sir Oliver, the eldest son, gained the bulk of his fortune, to each of the other sons were given estates of about an annual value of £300.[20]

Some of the children of Sir Henry and Joan his first wife were: