He was the second son of Duke Henry IX of Bavaria and Wulfhilde, daughter of Duke Magnus of Saxony; thus not only a member of the Welf family, but, what was quite important, also senior heir of the Saxon House of Billung. Henry came of age in 1123, in 1126 his father retired to Weingarten Abbey where he and his wife died shortly afterwards. As his elder brother Conrad had entered the Cistercian Order, Henry was enefeoffed with the Duchy of Bavaria. He shared the family possessions in Saxony, Bavaria and Swabia with his younger brother Welf VI.

In 1127 he married Gertrude, the only child of King Lothair III of Germany. Henry's father had been promised her marriage and inheritance as reward for his changing to support Lothair in the royal election of 1125 against the Hohenstaufen rival Duke Frederick II of Swabia. Gertrude was heir of the properties of three Saxon dynasties: the House of Supplinburg, the Brunonids, and the Counts of Northeim. The marriage marked the expansion of power of the Welf dynasty, Bavarian dukes since 1070, to the northern parts of Germany. The couple had only one son, Henry the Lion. 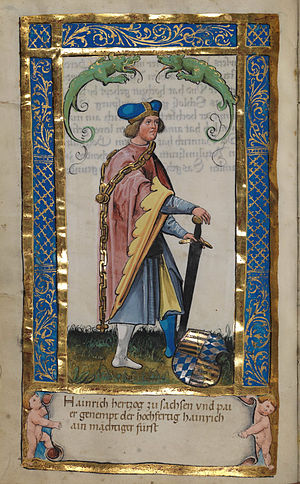 Henry, Duke of Saxony and Bavaria, Weingarten, about 1510

After the marriage, Henry remained a loyal supporter in the warfare between King Lothair and the Hohenstaufen brothers, Duke Frederick II (who was Henry's brother-in-law, having been married with his sister Judith) and Conrad, then Duke in Franconia and proclaimed the German anti-king. While engaged in this struggle, Henry was also occupied in suppressing a rising in Bavaria, led by Count Frederick of Bogen, during which both duke and count sought to establish their own candidates as Bishop of Regensburg. After a war of devastation, Count Frederick submitted in 1133, and two years later the Hohenstaufen brothers made their peace with Emperor Lothair.

In 1136, Henry accompanied his father-in-law to Italy, and taking command of a Bavarian division of the Imperial army marched into the south Italian Kingdom of Sicily up to Bari, devastating the land as he went. Having distinguished himself by his military abilities during this campaign, Henry was appointed as margrave of Tuscany, succeeding Engelbert III of Sponheim, and as Lothair's successor in the Duchy of Saxony. He was also given the private properties of late Margravine Matilda of Tuscany from the hands of Pope Innocent II.

When Emperor Lothair died on his way back from Italy in December 1137, Henry's wealth and position made him a formidable candidate for the German crown. According to the contemporary chronicler Otto of Freising, after his appointment as Duke of Saxony he boasted of a realm stretching "from sea to sea, from Denmark to Sicily". However, the same qualities which earned him the cognomen of "the Proud" aroused the jealousy of the princes and so ultimatively prevented his election. The new king, Conrad III, demanded the Imperial Regalia which Henry had received from Lothair, and the duke in return asked for his investiture with the Saxon duchy. But Conrad, who feared his power, refused to assent to this on the pretext that it was unlawful for two duchies to be in one hand. Attempts at a settlement failed, and when in July 1138 Henry refused to take the oath of allegiance, he was banned and deprived of both his duchies. Bavaria was given to the Babenberg margrave Leopold IV of Austria, a half-brother of the new king Conrad. Saxony, which he had attempted to hold but was not officially invested with, was given to the Ascanian count Albert the Bear, son of Eilika of Saxony, a younger daughter of the last Billung duke Magnus.

In 1139 Henry succeeded in expelling his enemies from Saxony and was preparing to attack Bavaria when he suddenly died in Quedlinburg. Henry is buried in the Imperial Cathedral of Königslutter next to his parents-in-law Emperor Lothair and Richenza of Northeim. His death left his son Henry the Lion underage, his claims to the Bavarian and Saxon duchies were asserted by Empress Richenza and his mother Gertrude.