Henry of Essex or Henry de Essex (died c. 1170) was an Anglo-Norman nobleman who held the honours of Rayleigh (by inheritance) and Haughley (by right of his second wife, Alice de Montfort), and the office of Constable of England during the reigns of Kings Stephen and Henry II. That office included the duty of bearing the royal standard to indicate the location of the king.

Henry was the son and heir of Robert fitz Swein of Essex, a pre-conquest English landowner who was favoured by King Edward the Confessor and who was allowed to build Rayleigh Castle some time after 1066. He was a grandson of Swein, son of Robert FitzWimarc.

After inheriting Rayleigh, he received a royal grant of Haughley Castle from King Stephen.

Henry is mentioned in several chronicles, including that of Jocelin of Brakelond. His influence at the royal court was greatest during the reign of Stephen, but it continued into the early years of Henry II's. He served Henry as Sheriff of Bedfordshire and Buckinghamshire from 1156 to 1159 and as a justiciar, as well as being his constable.[1] Henry participated in the king's Toulouse campaign in the spring and summer of 1159.[2]

After he dropped the royal standard in a Welsh ambush during Henry II's campaign into Wales of 1157, however, his political importance waned. As royal constable, his office required that he hold the standard to indicate the king's position during any military engagement. Dropping the standard seemed to signal the king's death. At the royal court held at Easter, 1163, Henry was accused of treason for that act by a claimant to the Montfort estate. The two men fought a judicial duel a few months later. Jocelin details Henry's judicial dual with Robert de Montfort (a rival for Henry's wife's inheritance) on Fry's Island in the River Thames at Reading. Henry's body was carried senseless from the site of the duel by monks of the nearby Reading Abbey, but he survived and took the Benedictine cowl. As a convicted traitor, however, his estates and offices were forfeit, and his family was disgraced.[3] He was allowed to remain as a monk at Reading Abbey, where he remained for the rest of his life.[4]

Henry of Essex is thought to have died at Reading Abbey in the same year as Becket, 1170.

Henry married firstly a woman named Cecily, by whom he seems to have had two sons, Henry and Hugh.[5] Henry's second wife was Alice de Montfort (possible daughter of Hugh de Montfort of Haughley Castle), by whom he had at least one daughter, Agnes, who married Aubrey de Vere, first Earl of Oxford, as his third wife.[6] 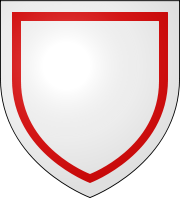