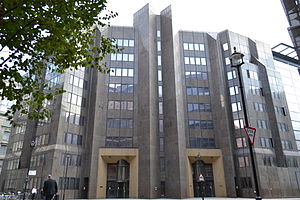 The Director-General of the National Offender Management Service, currently Michael Spurr, is the administrator of the prison service. The Director-General reports to the Secretary of State for Justice and also works closely with the Prisons Minister, a junior ministerial post within the Ministry of Justice.

The British Overseas Territory of Bermuda's HM Prison Service (renamed the Department of Corrections in 2002) was a separate organisation.

The Service's statement of purpose states "Her Majesty's Prison Service serves the public by keeping in custody those committed by the courts. Our duty is to look after them with humanity and help them lead law-abiding and useful lives in custody and after release." The Ministry of Justice's objective for prisons seeks "Effective execution of the sentences of the courts so as to reduce re-offending and protect the public".

Population statistics for the Service are published weekly. Statistics available for 4 July 2014 showed the service housed 85,428 prisoners: 81,429 males and 3,936 females.[4]

The over 60's are the fastest growing age category and Professor David Wilson, of Birmingham City University is concerned that there is no strategy to deal with them.[5]

Early in 2004, it was announced that the Prison Service would be integrated into a new National Offender Management Service later in the year.

Rationalisation of the prison management system is currently underway with the advent of the Titan Prison concept.

Historically, uniformed prison staff were under the supervision of a small number of very senior and experienced officers who held one of three Chief Officer ranks; however, reorganisation in the 1980s termed "A Fresh Start" saw these Chief Officer ranks abolished, and their role taken by junior grade prison Governors.

From 2000 onwards, as part of a process to increase accountability within the prison service, all operational officers have been assigned a 3-digit unique identification number, worn on all items of uniform (typically as an embroidered epaulette) along with the 2-digit LIDS identification code of the specific prison or institution. From 2010 onwards, attempts were made to replace the Principal Officer rank with non-uniformed junior managers (Developing Prison Service Managers - DPSM), although this process was neither entirely successful nor fully implemented.

Further restructuring in 2013 named 'Fair & Sustainable' saw the remaining historic ranks and rank insignia phased out in favour of a new structure, and simple stripes on uniform epaulettes to indicate grades.

Public sector prison officers (historically known as warders) have "all the powers, authority, protection and privileges of a constable" whilst acting as such.[6]

Although the system is flexible in operation, most Prison Officers work in small teams, either assigned to a specific duty, or providing one shift of staff for the supervision of a particular wing within a prison. Each such team is led by a Supervising Officer. There will be an overall manager of the wing with the title of Custodial Manager. Custodial Managers (CM) will have direct management of the wing and the line management of the Officers and Supervising Officers (SO).

In addition to uniformed officers carrying out security and custodial roles, a number of specialist functions exist within every prison. Some are assigned to uniformed Specialist Officers, whilst others are carried out by non-uniformed support staff.

Other key non-uniformed roles within the staff of a prison include chaplains, psychologists, and administrators.[7]

The Prison Service does not manage all prisons within England and Wales. Currently there are nine prisons that have been designed, constructed, managed and financed (so-called DCMF prisons) privately. In addition, three prisons that were built with public money are managed by private companies under contract. During 2012 one further prison opened under private sector management: HMP Oakwood (Featherstone 2), built by the public sector. Private prisons are subject to scrutiny by Her Majesty's Chief Inspector of Prisons in a similar manner to prisons run by the public Prison Service.

In January 2008, the Home Secretary announced that the government was to introduce legislation to remove the right for Prison Officers in England and Wales to take strike action.[8]

Every prison and immigration removal centre has an Independent Monitoring Board (IMB), formerly known as a Board of Visitors. Members of the IMB, who are volunteers, are appointed by the Home Secretary and act as 'watchdogs' for both the Minister of Prisons and the general public, to ensure that proper standards of care and decency are maintained.[9]

On 6 January 2004, then Home Secretary David Blunkett announced that the Prison Service, together with the National Probation Service, is to be integrated into a new National Offender Management Service. The Service, Blunkett said, will be "a new body to provide end-to-end management of all offenders".

On 1 April 2008, NOMS was reorganised as part of a shake-up in the Ministry of Justice. The headquarters and regional structures of NOMS and HMPS were merged into a single HQ structure with Phil Wheatly as Director General of NOMS. This brings HMPS and the National Probation Service under a single headquarters structure for the first time ever.[10]

On 1 June 2011, NOMS was merged with the wider MoJ (HMCTS etc.) to form one organisation. Although HMCTS and NOMS are working under different terms and conditions, they are now managed together and HR is dealt with by one Shared Service centre. A review of terms and conditions for all MoJ staff, including NOMS, is currently in progress with view to bringing all staff terms and conditions across NOMS and HMCTS in line.

Her Majesty's prison service collection is held at the Galleries of Justice Museum in Nottingham.