The Heraion of Samos was a large sanctuary to the goddess Hera, in the southern region of Samos, Greece, 6 km southwest of the ancient city, in a low, marshy river basin near the sea. The Late Archaic Heraion of Samos was the first of the gigantic free-standing Ionic temples, but its predecessors at this site reached back to the Geometric Period of the 8th century BC,[1] or earlier.[2] The site of temple's ruins, with its sole standing column, was designated a joint UNESCO World Heritage Site, along with the nearby Pythagoreion in 1992.

The core myth at the heart of the cult of Hera at Samos is that of her birth. According to the local tradition, the goddess was born under a lygos tree (Vitex agnus-castus, the "chaste-tree"). At the annual Samian festival called the Toneia, the "binding", the cult image of Hera was ceremonially bound with lygos branches. The tree still featured on the coinage of Samos in Roman times.

Many construction phases are known, identified in part through fragments of roof tiles,[3] the first phase dating to the 8th century BC. The first temple, the Hekatompedos, was roughly 100 feet (30 m) long and narrow; it consisted of three walls and an interior central line of columns to support a roof structure. A much larger temple was built by the architects Rhoikos and Theodoros ca. 570-550 BC. The temple stood opposite the cult altar of Hera in her walled and gated temenos. It was a dipteral temple, that is with a portico of columns two deep, which surrounded it entirely (peripteral). It had a deep square-roofed pronaos in front of a closed cella. Cella and pronaos were divided into three equal aisles by two rows of columns that marched down the pronaos and through the temple. The result was that Hera was worshipped in a temple fitted within a stylized grove of columns, eight across and twenty-one deep. The columns stood on unusual torus bases that were horizontally fluted. The Rhoikos temple "must have had central significance for the development of monumental Ionic architecture", Helmut Kyrieleis observes.[4]

Unfortunately it stood for only about a decade before it was destroyed, probably by an earthquake. After the destruction of the "Rhoikos temple", an even larger one was built approximately 40 m to the west. This temple had the largest known floor plan of any Greek temple and is known as the "Polycrates Temple", named after a tyrant of Samos. One of the giant statues from the Heraion survives in the Samos Archaeological Museum. Construction continued into the Roman period, but this Heraion was never wholly finished. Instead, the cult image was housed in Roman imperial times in a smaller structure to the east, which remained in use until the Theodosian edicts of 391 forbade pagan observance. A Christian church occupied the Roman site, employing stone taken from the Roman Heraeum.[5] 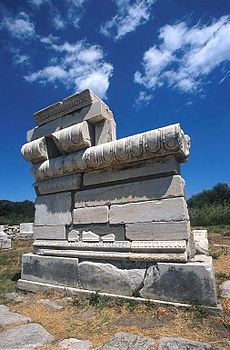 Stacked architectural elements give the tourist a photographic subject.

The Heraion served as a quarry through Byzantine times, so that it was eventually dismantled to the very foundations. Little information has survived in literary sources. Pausanias missed Samos in his Periegesis of Greece. Scattered mentions by Herodotus do not provide a satisfactory substitute.[6] With the exception of the open-air altar and the great temple no other feature of the temenos is mentioned in a classical source.

The first Westerner to visit the site was Joseph Pitton de Tournefort, commissioned by Louis XIV to travel in the East and report his findings.[7] Tournefort visited Samos in 1704, and published his drawings of the ruins as engravings. Massive siltation deposits obscured, yet protected the site from amateur tinkering in the 18th and 19th centuries. Reedbeds and thorny brakes of blackberry canes provided daunting cover, and the water table, risen since Antiquity, discouraged trench-digging at the same time that it preserved wooden materials in anoxic strata. Thus the first preliminary archaeological excavations were delayed until 1890-92, under the direction of P. Kavvadias and Th. Sophoulis, from Athens, and the full extent of the third temple's foundations were not revealed until Theodor Wiegand's campaign of 1910-14. Rubble demonstrated that there had been a previous temple.

In 1925 German archaeologists from the German Archaeological Institute at Athens began again at the site; work that was interrupted by the Second World War commenced again in 1951. The site has been minutely described in a series of volumes in German under the general title Samos, which were edited to a high standard, establishing a chronology against which the wide range of votive objects deposited at the Heraion from the 8th century onward can be compared. Helmut Kyrieleis and Hermann J. Kienast took charge of the excavations in 1976.