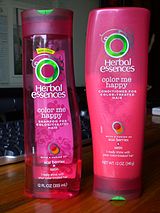 Herbal Essences is a brand of hair coloring and haircare products line by Clairol. The brand was founded in 1972.[1] There are twelve collections of product, each designed to have a different effect on the user's hair.