He married Mary du Caurroy Tribe, on 31 January 1888 at Barrackpore, India. She was appointed DBE and died in an aviation accident in 1937, three years before her husband. They had one child, Hastings William Sackville Russell, 12th Duke of Bedford (1888–1953).

Herbrand Russell took as his ward the illegitimate Anglo-Indian daughter of his older brother, George Russell, 10th Duke of Bedford. The daughter was known to have lived with the family until she was married and frequently visited them afterwards.

He gained the rank of officer in the service of the Grenadier Guards and was made a Colonel of the 3rd Battalion, Bedfordshire Regiment between 1897 and 1908. He fought in the Egyptian campaign in 1882 and in the First World War, where he was mentioned in dispatches. 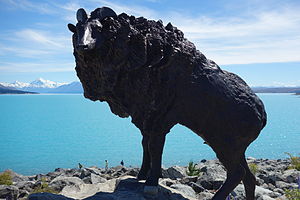 The Himalayan tahr sculpture unveiled in May 2014 at Lake Pukaki by Henrietta, Dowager Duchess of Bedford

He was President of the Zoological Society of London from 1899 to 1936, and was concerned with animal preservation throughout his life. According to Jane Goodall in her book Hope for Animals,[2] the Duke was instrumental in saving the milu (or Père David's deer), which was already extinct by 1900 in its native China. He acquired the few remaining deer from European zoos and nurtured a herd of them at Woburn Abbey. He gifted Himalayan tahr to the New Zealand government in 1903; of the three males and three females, five survived the journey and were released near the Hermitage Hotel at Mount Cook Village. He sent a further shipment in 1909 of six males and two females. Himalayan tahr are near-threatened in their native India and Nepal, but are so numerous in New Zealand's Southern Alps that they are hunted recreationally. A statue of a Himalayan tahr was unveiled in May 2014 at Lake Pukaki and dedicated by Henrietta, Dowager Duchess of Bedford.[3] Bedford served as president of the Cremation Society of Great Britain from 1921 to his death in 1940. He had the original cremator from Woking Crematorium moved and fitted inside a new chapel at Golders Green Crematorium, where he was himself cremated. His ashes are buried in the 'Bedford Chapel' at St. Michael’s Church, Chenies.

He was made an Honorary Doctor of Law (LL.D.) by Edinburgh University in 1906.

His grandson John Russell, 13th Duke of Bedford describes him as follows: "A selfish, forbidding man, with a highly developed sense of public duty and ducal responsibility, he lived a cold, aloof existence, isolated from the outside world by a mass of servants, sycophants and an eleven-mile wall." In conjunction with his son Hastings Russell, 12th Duke of Bedford, he developed plans to protect the Bedford fortune from the British tax regime. However, he died too soon for these to come to fruition and the only result was to involve his grandson in enormous difficulties in obtaining access to the family properties.