From Infogalactic: the planetary knowledge core
Jump to: navigation, search
This article is about Hercules in Roman classical mythology. For the Greek divine hero from which Hercules was adapted, see Heracles. For other uses, see Hercules (disambiguation).

Hercules is the Roman adaptation of the Greek divine hero Heracles, who was the son of Zeus (Roman equivalent Jupiter) and the mortal Alcmene. In classical mythology, Hercules is famous for his strength and for his numerous far-ranging adventures.

The Romans adapted the Greek hero's iconography and myths for their literature and art under the name Hercules. In later Western art and literature and in popular culture, Hercules is more commonly used than Heracles as the name of the hero. Hercules was a multifaceted figure with contradictory characteristics, which enabled later artists and writers to pick and choose how to represent him.[1] This article provides an introduction to representations of Hercules in the later tradition. 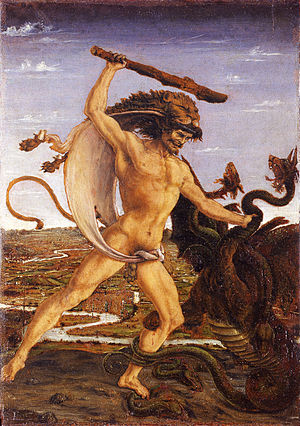 Hercules and the Hydra (ca. 1475) by Antonio del Pollaiuolo; the hero wears his characteristic lionskin and wields a club 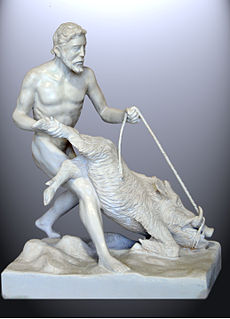 Hercules capturing the Erymanthian Boar, by J.M. Félix Magdalena (b. 1941) 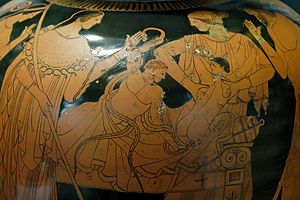 The infant Hercules (Heracles) strangling the snakes sent by the goddess Hera (a woman protects Iphikles on the right); detail from an Attic red-figured stamnos from Vulci, Etruria, Italy, ca. 480–470 BC
Main article: Labours of Hercules

Hercules is known for his many adventures, which took him to the far reaches of the Greco-Roman world. One cycle of these adventures became canonical as the "Twelve Labours," but the list has variations. One traditional order of the labours is found in the Bibliotheca as follows:[2]

Hercules had a greater number of "deeds on the side" (parerga) that have been popular subjects for art, including: 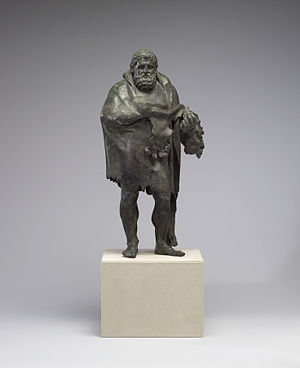 This Roman statuette is a copy after a Greek original that depicts the hero at an advanced age. Walters Art Museum, Baltimore.

The Latin name Hercules was borrowed through Etruscan, where it is represented variously as Heracle, Hercle, and other forms. Hercules was a favorite subject for Etruscan art, and appears often on bronze mirrors. The Etruscan form Herceler derives from the Greek Heracles via syncope. A mild oath invoking Hercules (Hercule! or Mehercle!) was a common interjection in Classical Latin.[3] 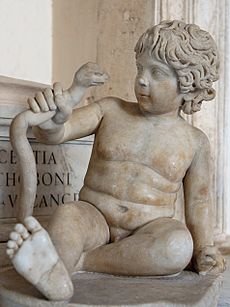 Hercules had a number of myths that were distinctly Roman. One of these is Hercules' defeat of Cacus, who was terrorizing the countryside of Rome. The hero was associated with the Aventine Hill through his son Aventinus. Mark Antony considered him a personal patron god, as did the emperor Commodus. Hercules received various forms of religious veneration, including as a deity concerned with children and childbirth, in part because of myths about his precocious infancy, and in part because he fathered countless children. Roman brides wore a special belt tied with the "knot of Hercules", which was supposed to be hard to untie.[4] The comic playwright Plautus presents the myth of Hercules' conception as a sex comedy in his play Amphitryon; Seneca wrote the tragedy Hercules Furens about his bout with madness. During the Roman Imperial era, Hercules was worshipped locally from Hispania through Gaul. 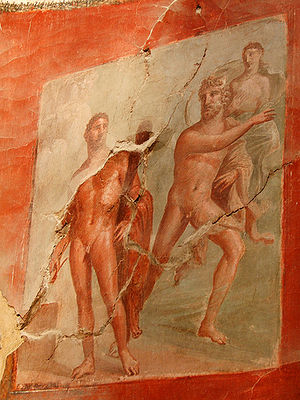 Tacitus records a special affinity of the Germanic peoples for Hercules. In chapter 3 of his Germania, Tacitus states:

... they say that Hercules, too, once visited them; and when going into battle, they sang of him first of all heroes. They have also those songs of theirs, by the recital of this barditus[5] as they call it, they rouse their courage, while from the note they augur the result of the approaching conflict. For, as their line shouts, they inspire or feel alarm.

Some have taken this as Tacitus equating the Germanic Þunraz with Hercules by way of interpretatio romana.[6]

In the Roman era Hercules' Club amulets appear from the 2nd to 3rd century, distributed over the empire (including Roman Britain, c.f. Cool 1986), mostly made of gold, shaped like wooden clubs. A specimen found in Köln-Nippes bears the inscription "DEO HER[culi]", confirming the association with Hercules.

In the 5th to 7th centuries, during the Migration Period, the amulet is theorized to have rapidly spread from the Elbe Germanic area across Europe. These Germanic "Donar's Clubs" were made from deer antler, bone or wood, more rarely also from bronze or precious metals.They are found exclusively in female graves, apparently worn either as a belt pendant, or as an ear pendant. The amulet type is replaced by the Viking Age Thor's hammer pendants in the course of the Christianization of Scandinavia from the 8th to 9th century. 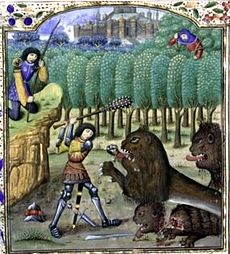 After the Roman Empire became Christianized, mythological narratives were often reinterpreted as allegory, influenced by the philosophy of late antiquity. In the 4th century, Servius had described Hercules' return from the underworld as representing his ability to overcome earthly desires and vices, or the earth itself as a consumer of bodies.[7] In medieval mythography, Hercules was one of the heroes seen as a strong role model who demonstrated both valor and wisdom, while the monsters he battles were regarded as moral obstacles.[8] One glossator noted that when Hercules became a constellation, he showed that strength was necessary to gain entrance to Heaven.[9]

Medieval mythography was written almost entirely in Latin, and original Greek texts were little used as sources for Hercules' myths.

The Renaissance and the invention of the printing press brought a renewed interest in and publication of Greek literature. Renaissance mythography drew more extensively on the Greek tradition of Heracles, typically under the Romanized name Hercules, or the alternate name Alcides. In a chapter of his book Mythologiae (1567), the influential mythographer Natale Conti collected and summarized an extensive range of myths concerning the birth, adventures, and death of the hero under his Roman name Hercules. Conti begins his lengthy chapter on Hercules with an overview description that continues the moralizing impulse of the Middle Ages:

Hercules, who subdued and destroyed monsters, bandits, and criminals, was justly famous and renowned for his great courage. His great and glorious reputation was worldwide, and so firmly entrenched that he'll always be remembered. In fact the ancients honored him with his own temples, altars, ceremonies, and priests. But it was his wisdom and great soul that earned those honors; noble blood, physical strength, and political power just aren't good enough.[10]

In Roman works of art and in Renaissance and post-Renaissance art, Hercules can be identified by his attributes, the lion skin and the gnarled club (his favorite weapon); in mosaic he is shown tanned bronze, a virile aspect.[11]

Hercules was among the earliest figures on ancient Roman coinage, and has been the main motif of many collector coins and medals since. One example is the 20 euro Baroque Silver coin issued on September 11, 2002. The obverse side of the coin shows the Grand Staircase in the town palace of Prince Eugene of Savoy in Vienna, currently the Austrian Ministry of Finance. Gods and demi-gods hold its flights, while Hercules stands at the turn of the stairs.

For a list of films featuring Hercules, see Hercules in popular culture#Filmography.

A series of nineteen Italian Hercules movies were made in the late 1950s and early 1960s. The actors who played Hercules in these films were Steve Reeves, Gordon Scott, Kirk Morris, Mickey Hargitay, Mark Forest, Alan Steel, Dan Vadis, Brad Harris, Reg Park, Peter Lupus (billed as Rock Stevens) and Michael Lane. A number of English-dubbed Italian films that featured the name of Hercules in their title were not intended to be movies about Hercules.