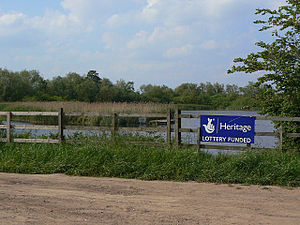 The Heritage Lottery Fund (HLF) was established in the United Kingdom under the National Lottery etc. Act 1993. The Fund opened for applications in 1994.

Although HLF is branded as though a body in its own right, it is administered by a pre-existing non-departmental public body – the Board of Trustees of the National Heritage Memorial Fund (NHMF). The turnover of HLF is considerably larger than the ongoing work of the NHMF (funded from Exchequer grants and endowments). Although HLF is not a government department, the Secretary of State for Culture, Media and Sport issues financial and policy directions to the organisation, which reports to Parliament through the Department.

Decisions about policies and large applications are made by the Trustees of the NHMF. There are also decision-making committees in the English regions, Scotland, Wales and Northern Ireland.

Head office is in London, with separate offices in nine English regions and in Scotland, Wales and Northern Ireland.

Heritage Lottery Fund offer a range of different grant programmes from £3,000 to over £5million.