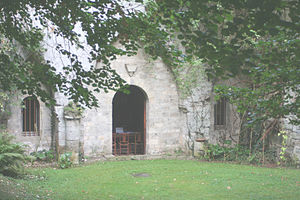 13th-century façade of the ancient Abbey of Grestain in Normandy, which was founded in 1050 by Herluin of Conteville and Herleva, the mother of William, Duke of Normandy and King of England 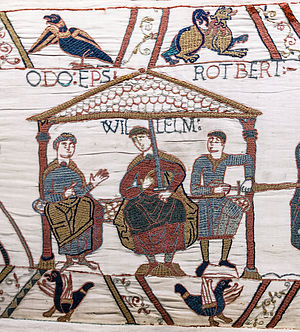 The three sons of Herleva of Falaise: William, Duke of Normandy, in the centre, Odo, the bishop of Bayeux, on the left and Robert, Count of Mortain, on the right (Bayeux Tapestry, 1070s)

Herleva[lower-alpha 1] (c. 1003 – c. 1050) had three sons – William I of England, who was fathered by Robert I, Duke of Normandy, and Odo of Bayeux and Robert, Count of Mortain, who were both fathered by Herluin de Conteville. All became prominent in William's realm.

The background of Herleva and the circumstances of William's birth are shrouded in mystery. The written evidence dates from a generation or two later, and is not entirely consistent, but of all the Norman chroniclers only the Tours chronicler asserts that William's parents were subsequently joined in marriage.[5] The most commonly accepted version says that she was the daughter of a tanner named Fulbert from the town of Falaise, in Normandy. The meaning of filia pelletarii burgensis[6] is somewhat uncertain, and Fulbert may instead have been a furrier, embalmer, apothecary, or a person who laid out corpses for burial.[7]

Some argue that Herleva's father was not a tanner but rather a member of the burgher class.[8] The idea is supported by the appearance of her brothers in a later document as attestors for an under-age William. Also, the Count of Flanders later accepted Herleva as a proper guardian for his own daughter. Both of these would be nearly impossible if Herleva's father was a tanner, which would place his standing as little more than a peasant.

Relationship with Robert the Magnificent

According to one legend, still recounted by tour guides at Falaise, it all started when Robert, the young Duke of Normandy, saw Herleva from the roof of his castle tower. The walkway on the roof still looks down on the dyeing trenches cut into stone in the courtyard below, which can be seen to this day from the tower ramparts above. The traditional way of dyeing leather or garments was to trample barefoot on the garments which were awash in the liquid dye in these trenches. Herleva, legend goes, seeing the Duke on his ramparts above, raised her skirts perhaps a bit more than necessary in order to attract the Duke's eye. The latter was immediately smitten and ordered her brought in (as was customary for any woman that caught the Duke's eye) through the back door. Herleva refused, saying she would only enter the Duke's castle on horseback through the front gate, and not as an ordinary commoner. The Duke, filled with lust, could only agree. In a few days, Herleva, dressed in the finest her father could provide, and sitting on a white horse, rode proudly through the front gate, her head held high.[10] This gave Herleva a semi-official status as the Duke's concubine.[11] She later gave birth to his son, William, in 1027 or 1028.[12]

Some historians suggest Herleva was first the mistress of Gilbert of Brionne with whom she had a son, Richard. It was Gilbert who first saw Herleva and elevated her position and then Robert took her for his mistress.[13]

Herleva later married Herluin de Conteville in 1031. Some accounts maintain that Robert always loved her, but the gap in their social status made marriage impossible, so, to give her a good life, he married her off to one of his favourite noblemen.[14]

Another source suggests that Herleva did not marry Herluin until after Robert died, because there is no record of Robert entering another relationship, whereas Herluin married another woman, Fredesendis, by the time he founded the abbey of Grestain.[15]

From her marriage to Herluin she had two sons: Odo, who later became Bishop of Bayeux, and Robert, who became Count of Mortain. Both became prominent during William's reign. They also had at least two daughters: Emma, who married Richard le Goz, Viscount of Avranches, and a daughter of unknown name who married William, lord of la Ferté-Macé.[16]

According to Robert of Torigni, Herleva was buried at the abbey of Grestain, which was founded by Herluin and their son Robert around 1050. This would put Herleva in her forties around the time of her death. However, David C. Douglas suggests that Herleva probably died before Herluin founded the abbey because her name does not appear on the list of benefactors, whereas the name of Herluin's second wife, Fredesendis, does.[17]