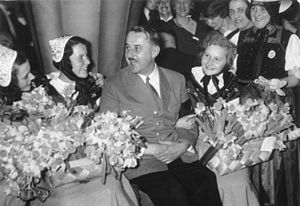 Hermann Esser (29 July 1900 – 7 February 1981) was a very early member of the Nazi Party (NSDAP). A journalist, Esser was the editor of the Nazi paper, Völkischer Beobachter, and a Nazi member of the Reichstag. In the early history of the party, he was a de facto deputy of Adolf Hitler.

Esser was born in Röhrmoos, Kingdom of Bavaria. The son of a civil servant, he was educated in the high school at Kempten. As a teenager he volunteered and did service in World War I in the Kgl. Bayerischen 19, Fussartillerie-Regiment.[1]

A radical socialist, after he joined a left-wing provincial newspaper to train as a journalist.[1] Having previously formed his own Social Democrat party, but as it was small and one of numerous post-Armistice parties in Germany and Austria, it quickly failed.

Having met Anton Drexler through his work, he joined with the group of men that formed the Nazi Party: Drexler, Gottfried Feder and Dietrich Eckart.[2] Esser joined the party, holding membership card No. 2. In 1920 he met Hitler in the regional press office of the Reichswehr (Army of the Weimar Republic), and was made editor of Volkischer Beobachter that same year.[1]

A good public speaker, Esser was as a result able to rouse and direct rebels, enabling them to attack the political meetings of groups and parties that the NSDAP frowned upon. Esser's speeches were described by Louis Snyder as “Crude, uncultured, of low moral character", featuring the kernel of future Nazi policies: extreme nationalism; anti-Semite. From 1923 to 1925 he became the party's first head of propaganda, turning out a series of posters and a book attacking the Jews.[2]

However, as a political opportunist, he told Hitler that he was ill and could not attend 1923's Beer Hall Putsch, and afterwards fled to Austria. Excluded from the party, along with Julius Streicher, he later returned to Bavaria in January 1924 and sentenced to three months in prison.[1] He later visited Hitler in Landsberg Prison. He became part of the new leadership of the Strassers which threatened to split the party in two, and it was only in 1926 after Hitler's return that the split was avoided.

After Esser fell out with Streicher, and Hitler sided with his opponent, Esser threatened to go to the media with the NSDAP's secrets. Bought off by being made editor of Illustrierter Beobachter until 1932, in which he engaged the public through gossip and scandal. From 1929 to 1933, he was the party's floor leader in Munich's city council. In 1933 he was elected to the Reichstag representing Upper Bavaria-Swabia.

In May 1933, Esser returned to Passau to address a rally celebrating the dedication of the Ostmarkmuseum.[4]

In 1935 he persuaded General Franz Ritter von Epp to make him Bavaria's minister of economics.[1]

Esser enjoyed life and the power that his media and political power gave him with women, which quickly got him into trouble. After he got a young woman pregnant, and refused to marry her, she appealed directly to Hitler who told Esser that he must do the right thing. On birth of the child, Hitler became the child’s godfather.

After later sexually assaulting the underage daughter of a businessman, the combined disgust from Strasser, Streicher and Joseph Goebbels led to his suspension from the NSDAP in March 1935.[1] Hitler said of him: I know Esser is a scoundrel, but I shall hold on to him as long as he is useful to me.

Knowing too much to be cast aside, Hitler gave him various minor secretarial roles in the party in Bavaria, but away from Munich. He was later re-admitted by Hitler and became influential in the reorganisation of the party. After his exclusion from politics in Bavaria and the Reichstag in 1935, Hitler as Chancellor appointed him Undersecretary for Tourism in the Reich propaganda ministry.[1] In December 1939 he became Vice President of the Reichstag.[1]

He first wrote and published his book Die jüdische Weltpest (The Jewish World Plague) in 1933. But after Kristallnacht of 9 November 1938, he republished it in early 1939, again under the NSDAP press.[5] His last official NSDAP duty was being the main guest speaker at the 23rd founding anniversary party.[1]

Arrested by the Americans after the end of the war in Europe, he was released in 1947 after being considered an unimportant Nazi official.[2] Esser then went into hiding only to be re-arrested in 1949 by the West German Police.[2] Charged under the new West Germany anti-Nazification laws, he was found guilty of being a "major offender" and sentenced to five years hard labour with a loss of civil rights for life. He was then released in 1952.[2]