Müller started his competitive career on an Imperia in 1928. He became German Sidecar Champion in 1932, then in 1936, he took the German 500cc Motorcycle title.

He switched to cars the next year, driving for Auto Union. He won the 1939 edition of the FIA French Grand Prix held in Reims. The winner of that season's European Championship was never officially announced by the AIACR due to the outbreak of World War II. Although Müller would have won the championship on points, the president of Germany's highest motorsports organisation declared Hermann Lang the champion.[1]

After the war he returned to motorcycle racing, winning the 1947 and 1948 German 250cc titles on DKW. In 1955, he won the 250cc world championship riding an NSU Sportmax. He also set quite a number of world speed records in five classes over six distances for NSU on the Bonneville salt flats in 1956. To this day he remains the oldest person to win a Grand Prix Motorcycle world championship, at the age of 46. 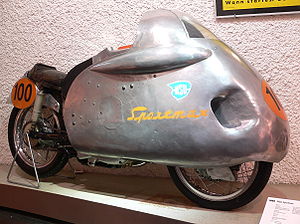 The NSU motorcycle with which Müller won the 1955 250 cc World Championship.