Hermann Ludwig Ferdinand von Helmholtz[lower-alpha 1] (31 August 1821 – 8 September 1894) was a German physicist and physician who made significant contributions in several scientific fields. The largest German association of research institutions, the Helmholtz Association, is named after him.[5]

In physiology and psychology, he is known for his mathematics of the eye, theories of vision, ideas on the visual perception of space, color vision research, and on the sensation of tone, perception of sound, and empiricism in the physiology of perception.

In physics, he is known for his theories on the conservation of energy, work in electrodynamics, chemical thermodynamics, and on a mechanical foundation of thermodynamics.

Helmholtz was born in Potsdam the son of the local gymnasium headmaster, Ferdinand Helmholtz, who had studied classical philology and philosophy, and who was a close friend of the publisher and philosopher Immanuel Hermann Fichte. Helmholtz's work was influenced by the philosophy of Johann Gottlieb Fichte and Immanuel Kant. He tried to trace their theories in empirical matters like physiology.

As a young man, Helmholtz was interested in natural science, but his father wanted him to study medicine. Helmholtz earned a medical doctorate at Medicinisch-chirurgisches Friedrich-Wilhelm-Institut (de) in 1842 and served a one-year internship at the Charité hospital[6] (because there was financial support for medical students).

Trained primarily in physiology, Helmholtz wrote on many other topics, ranging from theoretical physics, to the age of the Earth, to the origin of the Solar System. 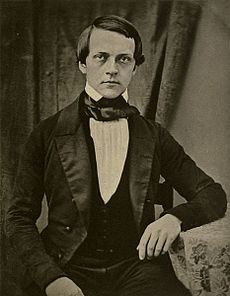 His first important scientific achievement, an 1847 treatise on the conservation of energy, was written in the context of his medical studies and philosophical background. His work on energy conservation came about while studying muscle metabolism. He tried to demonstrate that no energy is lost in muscle movement, motivated by the implication that there were no vital forces necessary to move a muscle. This was a rejection of the speculative tradition of Naturphilosophie which was at that time a dominant philosophical paradigm in German physiology.

Drawing on the earlier work of Sadi Carnot, Benoît Paul Émile Clapeyron and James Prescott Joule, he postulated a relationship between mechanics, heat, light, electricity and magnetism by treating them all as manifestations of a single force, or energy in today's terminology. He published his theories in his book Über die Erhaltung der Kraft (On the Conservation of Force, 1847).[8]

In the 1850s and 60s, building on the publications of William Thomson, Helmholtz and William Rankine popularized the idea of the heat death of the universe.

In fluid dynamics, Helmholtz made several contributions, including Helmholtz's theorems for vortex dynamics in inviscid fluids.

Helmholtz was a pioneer in the scientific study of human vision and audition. Inspired by psychophysics, he was interested in the relationships between measurable physical stimuli and their correspondent human perceptions. For example, the amplitude of a sound wave can be varied, causing the sound to appear louder or softer, but a linear step in sound pressure amplitude does not result in a linear step in perceived loudness. The physical sound needs to be increased exponentially in order for equal steps to seem linear, a fact that is used in current electronic devices to control volume. Helmholtz paved the way in experimental studies on the relationship between the physical energy (physics) and its appreciation (psychology), with the goal in mind to develop "psychophysical laws."

The sensory physiology of Helmholtz was the basis of the work of Wilhelm Wundt, a student of Helmholtz, who is considered one of the founders of experimental psychology. More explicitly than Helmholtz, Wundt described his research as a form of empirical philosophy and as a study of the mind as something separate. Helmholtz had, in his early repudiation of Naturphilosophie, stressed the importance of materialism, and was focusing more on the unity of "mind" and body.[9]

In 1851, Helmholtz revolutionized the field of ophthalmology with the invention of the ophthalmoscope; an instrument used to examine the inside of the human eye. This made him world-famous overnight. Helmholtz's interests at that time were increasingly focused on the physiology of the senses. His main publication, titled Handbuch der Physiologischen Optik (Handbook of Physiological Optics or Treatise on Physiological Optics), provided empirical theories on depth perception, color vision, and motion perception, and became the fundamental reference work in his field during the second half of the nineteenth century. In the third and final volume, published in 1867, Helmholtz described the importance of unconscious inferences for perception. The Handbuch was first translated into English under the editorship of James P. C. Southall on behalf of the Optical Society of America in 1924–5. His theory of accommodation went unchallenged until the final decade of the 20th century.

Helmholtz continued to work for several decades on several editions of the handbook, frequently updating his work because of his dispute with Ewald Hering who held opposite views on spatial and color vision. This dispute divided the discipline of physiology during the second half of the 1800s.

In 1849, while at Königsberg, Helmholtz measured the speed at which the signal is carried along a nerve fibre. At that time most people believed that nerve signals passed along nerves immeasurably fast.[10] He used a recently dissected sciatic nerve of a frog and the calf muscle to which it attached. He used a galvanometer as a sensitive timing device, attaching a mirror to the needle to reflect a light beam across the room to a scale which gave much greater sensitivity.[10] Helmholtz reported[11][12] transmission speeds in the range of 24.6 – 38.4 meters per second.[10] 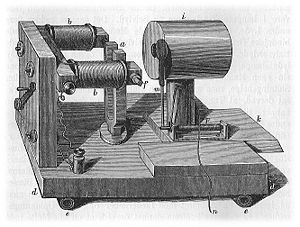 The Helmholtz resonator (i) and instrumentation

In 1863, Helmholtz published Sensations of Tone, once again demonstrating his interest in the physics of perception. This book influenced musicologists into the twentieth century. Helmholtz invented the Helmholtz resonator to identify the various frequencies or pitches of the pure sine wave components of complex sounds containing multiple tones.[13]

Helmholtz showed that different combinations of resonator could mimic vowel sounds: Alexander Graham Bell in particular was interested in this but, not being able to read German, misconstrued Helmholtz' diagrams as meaning that Helmholtz had transmitted multiple frequencies by wire—which would allow multiplexing of telegraph signals—whereas, in reality, electrical power was used only to keep the resonators in motion. Bell failed to reproduce what he thought Helmholtz had done but later said that, had he been able to read German, he would not have gone on to invent the telephone on the harmonic telegraph principle.[14][15][16][17] 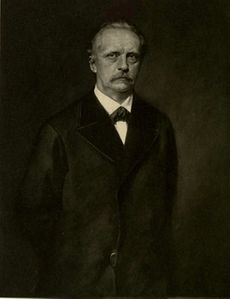 Helmholtz studied the phenomena of electrical oscillations from 1869 to 1871, and in a lecture delivered to the Naturhistorisch-medizinischen Vereins zu Heidelberg (Natural History and Medical Association of Heidelberg) on 30 April 1869, titled On Electrical Oscillations he indicated that the perceptible damped electrical oscillations in a coil joined up with a Leyden jar were about 1/50th of a second in duration.[19]

Whoever, in the pursuit of science, seeks after immediate practical utility may rest assured that he seeks in vain. — Academic Discourse (Heidelberg 1862)[21]

Other students and research associates of Helmholtz at Berlin included Max Planck, Heinrich Kayser, Eugen Goldstein, Wilhelm Wien, Arthur König, Henry Augustus Rowland, Albert A. Michelson, Wilhelm Wundt, Fernando Sanford and Michael I. Pupin. Leo Koenigsberger, who was his colleague 1869–1871 in Heidelberg, wrote the definitive biography of him in 1902. 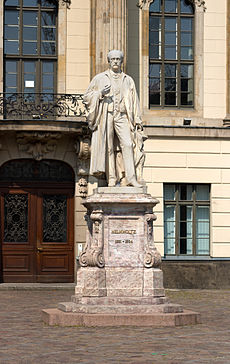 Helmholtz's statue in front of Humboldt University in Berlin 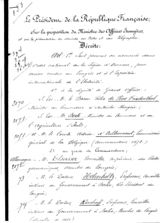 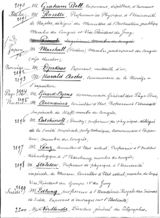