From Infogalactic: the planetary knowledge core
(Redirected from Hermaphrodite brig)
Jump to: navigation, search
Not to be confused with Brig.

In sailing, a brigantine is a two-masted vessel with foremast fully square rigged and her mainmast rigged with both a fore-and-aft mainsail (a gaff sail) and a square topsail, and possibly a topgallant sail.[1]

In the Mediterranean Basin during the 13th century, a brigantine referred to a sail- and oar-driven war vessel.[2] It was lateen rigged on two masts and had between eight and twelve oars on each side. Its speed, maneuverability and ease of handling made it a favourite of Mediterranean pirates. Its name is derived from the Italian word brigantino, which in turn is derived from brigante[3] (meaning brigand). Other than in names, this vessel has no relation to the later brigantines developed in Northern Europe.[4] 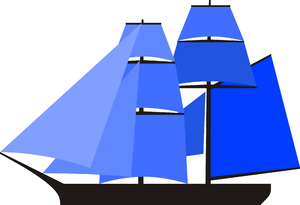 By the 17th century the term was adapted by Atlantic maritime nations. The vessel had no lateen sails but was instead square-rigged on the foremast and had a gaff-rigged mainsail with square rig above it on the mainmast.[5] The main mast of a brigantine is the aft one.

By the first half of the 18th century the word had evolved to refer not to a kind of vessel, but rather to a particular type of rigging: two-masted, with her foremast fully square-rigged and her mainmast rigged with both a fore-and-aft mainsail (a gaff sail) and square topsails and possibly topgallant sails.[6]

The brigantine was the second most popular rig for ships built in the American colonies before 1775[7] (the most popular type of vessel being a sloop). The brigantine was swifter and more easily maneuvered than a sloop or schooner, and was hence employed for purposes of piracy, espionage, and reconnoitering, and as an outlying attendant upon large ships for protecting a ship, or for supply or landing purposes in a fleet.

The brigantine could be of various sizes, ranging from 50 to 200 tons burden. The brigantine was generally larger than a sloop or schooner but smaller than a brig.[8]

The last sailing true brigantine in the world is the Eye of the Wind.[9] 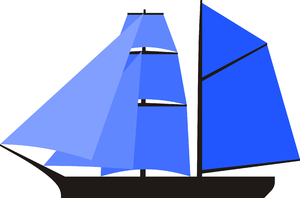 The definition given above describes the international usage of the term brigantine. In modern[when?] American terminology, the term brigantine now usually means a vessel with the foremast square rigged and the mainmast fore-and-aft rigged, without any square sails. Historically, this rig used to be called a schooner brig or hermaphrodite brig.[10]

The word brig is an 18th-century shortening of the word brigantine, but came to mean a different type of rigging. It is the gaff-rigged mainsail on a brigantine which distinguishes it from the brig, which is principally square rigged on both masts.