Hermione Youlanda Ruby Clinton-Baddeley,[1] known as Hermione Baddeley, (13 November 1906 – 19 August 1986) was an English character actress of theatre, film and television. She was nominated for an Academy Award for Best Supporting Actress for her performance in Room at the Top (1959) and a Tony Award for Best Performance by a Leading Actress in a Play for The Milk Train Doesn't Stop Here Anymore in 1963. She typically played brash, vulgar characters, often referred to as "brassy" or "blowsy".[2][3]

Baddeley was born in Broseley, Shropshire, England. She is a descendent of British American Revolutionary War General Sir Henry Clinton. Her elder sister, Angela Baddeley, was also an actress. Her half-brother, Very Rev William Baddeley, was a Church of England priest who became Rural Dean of Westminster.[4] 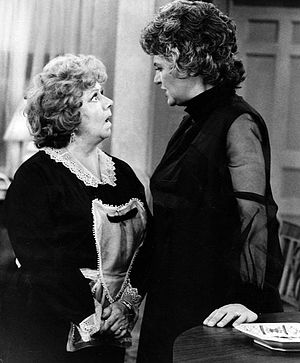 Baddeley (left) as Mrs Naugatuck in Maude, with Bea Arthur

Baddeley was known for standout supporting performances in such films as Mary Poppins (as Ellen, the maidservant), The Belles of St Trinian's, The Unsinkable Molly Brown, Passport to Pimlico, The Pickwick Papers, Tom Brown's Schooldays and A Christmas Carol, although she first began making films back in the 1920s. One of her most important roles was in Brighton Rock (1947), in which she played Ida, one of the main characters, whose personal investigation into the disappearance of a friend threatens the anti-hero Pinkie.

She also had a successful stage career. She had a long professional relationship with Sir Noël Coward, appearing in many of his plays throughout the 1940s and 1950s. The most successful was her teaming with Hermione Gingold in Coward's comedy Fallen Angels, though the two women were apparently "no longer of speaking terms" by the end of the run.[5]

She was nominated for an Academy Award for Best Supporting Actress for her portrayal of Simone Signoret's best friend in Jack Clayton's Room at the Top (1959).[3] With just 2 minutes and 20 seconds, hers is the shortest role to be nominated for an Academy Award. In 1960 she played prostitute Doll Tearsheet in the BBC's series of Shakespeare history plays An Age of Kings, acting alongside her sister Angela as Mistress Quickly. In 1963, she was nominated for Broadway's Tony Award as Best Actress (Dramatic) for The Milk Train Doesn't Stop Here Anymore.

She was known to American audiences for roles in Bewitched, Little House on the Prairie and Maude (playing the title character's second housekeeper, Nell Naugatuck).[3] Toward the end of her career, Baddeley was also a sought-after voice-over actress, including roles in The Aristocats (1971) and The Secret of NIMH (1982).

In 1928 Baddeley married the Hon. David Francis Tennant (third son of Edward Tennant, 1st Baron Glenconner). She arrived an hour late for the wedding, having misremembered the time booked for the ceremony.[1] They rented Teffont Evias Manor, which became known for their boisterous parties (including mixed naked bathing in the goldfish pond).[6] She had a daughter Pauline Tennant in 1927.[7] They divorced in 1937 but remained good friends until his death.

In 1940 Baddeley married Major J.H. "Dozey" Willis. They divorced in 1946. She also had a relationship with the actor Laurence Harvey, a man 22 years her junior. Although Harvey proposed marriage to her, Baddeley thought the age difference was too great.[8] Harvey left Baddeley in 1951 for actress Margaret Leighton.

Baddeley was known for her devotion to animals. She dedicated her autobiography, The Unsinkable Hermione Baddeley, to her pet dog.[1] She continued to work in film and television until shortly before the end of her life.

She died following a series of strokes on 19 August 1986, aged 79, at Cedars-Sinai Medical Center in Los Angeles, California. She was survived by two children, Pauline Tennant and David, from her first marriage. She was interred in St Mary and St Melor Parish Church in Amesbury, Wiltshire.[9]