Although today's meaning is usually a place where a hermit lives in seclusion from the world, hermitage was more commonly used to mean a settlement where a person or a group of people lived religiously, in seclusion. 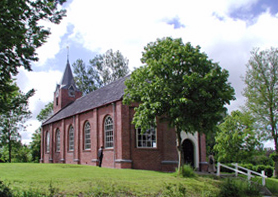 Hermitage "Our Lady of the Enclosed Garden" in Warfhuizen, the Netherlands

A hermitage is a type of monastery. Typically it has a room, or at least a dedicated space, for religious devotion, very basic sleeping quarters and a domestic cooking range, suitable for the ascetic way of living of the inhabitant. Depending on the work of the hermit, premises such as a studio, workshop or chapel may be attached or sited in proximity.

Traditionally, hermitages have been located in caves and huts, often in the desert or woods, sometimes abutting monastery buildings of a cenobitic community when there was an exchange of labour and provisions. In medieval times, they may have been endowed by the lord or lady of a manor in return for prayers for their family, or in city dwellings, e.g., inside the city gate as remuneration for services rendered as a gatekeeper. In modern times they are to be found even in large cities and high-rise blocks of flats, depending on the hermit's means.

A poustinia is a small, sparsely furnished cabin or room where one goes to pray and fast alone in the presence of God. The word poustinia has its origin in the Russian word for desert.

In Hinduism, a hermitage is called an ashram. Traditionally, an ashram in ancient India was a place where sages lived in peace and tranquility amidst nature.[1]