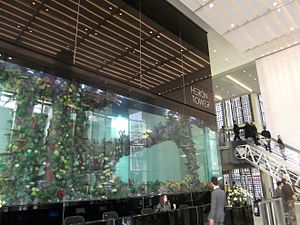 The lobby features a 70,000-litre aquarium containing hundreds of fish.

The Heron Tower (officially 110 Bishopsgate) is a commercial skyscraper in London. It stands 230 metres (755 ft) tall[4] including its 28-metre (92 ft) mast (202 metres (663 ft) excluding the mast) making it the tallest building in the City of London financial district[5] and the third tallest in Greater London and the United Kingdom, after the Shard in Southwark and One Canada Square at Canary Wharf. The Heron Tower is located on Bishopsgate and is bordered by Camomile Street, Outwich Street and Houndsditch.

Construction of the building started in 2007 and was completed in 2011. It is owned by Heron International and is generally known as the Heron Tower, though following a naming dispute in 2014 involving the tenant Salesforce.com[6] the City of London ruled in favour of the property being officially named 110 Bishopsgate.[7] The tower initially struggled to attract tenants in the depths of the Great Recession, but is now 90% leased or under offer.

Designed by architects Kohn Pedersen Fox, the height of the Heron Tower was planned to be only 183 m, identical to that of Tower 42, the City of London's then tallest building since 1980.

It attracted some controversy when first announced due to its proximity to St Paul's Cathedral when viewed from Waterloo Bridge. English Heritage was notably vocal in expressing concerns. A public inquiry was subsequently held, the outcome of which was decided by deputy prime minister John Prescott, who ruled in the developers' favour. The tower was given final approval for construction in July 2002.

Three years later, the project had yet to begin construction. In September 2005 the Heron Property Corporation submitted a planning application to increase the height of its approved building. Heron's revised plans now proposed a 202-metre (663 ft) tall tower topped by a 28-metre (92 ft) mast, giving it a total height of 230 metres (755 ft). Although the design was largely identical to the previous scheme, the tower's crown and southern façades were refined. In January 2006, the revised project was approved by the City of London Corporation.

In February 2013 it was revealed in The Times that backers of the Heron Tower included Prince Abdul Aziz bin Fahd, a son of the late King Fahd of Saudi Arabia.[8]

The Heron Tower was designed to feature a concierge-style entrance and reception area, incorporating a 70,000 litre aquarium containing around 1,200 fish.[9] The aquarium is the largest privately owned example in the United Kingdom and contains over 60 species of fish in an entire sustainable ecosystem; the species were selected by expert biologists and animal curators to ensure compatibility and adaptability to the environment. The tank is attended to by a team of two full-time fish attendants, who feed the fish a diet rich in natural ingredients according to their requirements and monitor the tank for water chemistry and fish health, and two to three part-time divers who clean the rockwork and glass regularly.

A bar-restaurant called The Drift occupies part of the ground and first floors.[10] There is a restaurant and "sky bar" leased to Sushi Samba and Duck & Waffle, both open to the public, on floors 38–40.[11] Situated 175 metres (574 ft) above the City and accessed by scenic lifts from a dedicated entrance on Bishopsgate, the restaurant and bar also have external terraces.[12]

The building uses photovoltaic cells to generate renewable energy, allowing it to achieve a BREEAM rating of 'excellent' in January 2010.[13]

In March 2007, it was confirmed that Heron had signed a funding deal with the State General Reserve Fund of Oman to provide the equity for the development.[14] Following the appointment of Skanska, the firm that erected the gherkin-shaped 30 St Mary Axe building, as main contractor, work began on the site at No. 110, Bishopsgate, in mid-2007.

Full construction began in April 2008, with foundation piles and steel rebar cages being installed, while the first tower crane was erected in June. In August a second tower crane was erected, followed by a third and final crane in September. In early October, the first steel beams appeared on site, with the core visible above street level. In November, steelwork temporarily finished, and concrete was poured for the base slabs.

Steelwork recommenced on 19 January 2009. The speed of construction then increased, with floors being constructed in sets of two, with each set taking a planned fortnight to construct.[15] The first cladding was applied on 22 May.

In July, Heron, Skanska and Kohn Pederson Fox held a time capsule ceremony at the site, marking the sealing of the building's foundations. The capsule contained a number of items of significance to the Heron Tower and also included an ethically sourced tortoise shell, in line with Feng Shui principles.

In October 2009 the tower stood at 34 floors and just over 150 metres (492 ft). In mid-October, construction reached the tower's first 'setback' – the 'three-storey village' construction over, and the last 50 metres (164 ft) of the building to be constructed, forming the top of the tower, followed by the spire to top out the building. In early November 2009 it overtook the 164-metre (538 ft) Broadgate Tower, making it the third-tallest building in the City of London. By the end of 2009, construction reached the 44th floor, overtaking Tower 42 as the City's tallest, a record it had held for 30 years. Christmas lights were also added to the cranes in December.

On 12 April 2010, Heron held a 'topping out' ceremony to celebrate the building's structural completion, attended by the Lord Mayor of London. On 22 July 2010, the spire was added, taking the height of the building to 230 metres (755 ft). In January 2011, the aquarium was delivered and installed.

The tower's first confirmed tenant was the law firm McDermott Will & Emery, which signed up in July 2010 while the building was still under construction.[16] However, in a difficult lettings market the building struggled to find enough tenants to fill it and in September 2013 only 59% of the available office space had been let.[17] As a result, the project required refinancing, with Starwood Capital Group stepping in to provide a £288 million refinancing facility to avoid the project going into receivership.[18]

Subsequent agreed tenants included the pensions company Partnership Assurance, investment fund manager Securis Investment Partners, stockbroker Westhouse Securities, POWA, recruitment firm Harvey Nash,[19] Openwork, and Salesforce.com, the software firm.[20] As part of Salesforce's deal to take an additional 50,000 sq ft on levels 28-31 on a 15-year lease, it reportedly purchased naming rights to the tower, just as it had for its headquarters building in San Francisco. In a later announcement however, Landmark announced that this was not the case, and that the building would instead be renamed 110 Bishopsgate.[21]

Landmark have offered serviced office space from floors 17-19 of the tower since 2011, achieving above-average occupancy rates for London.[22] The top floors of the building are occupied by the Sushi Samba and Duck & Waffle restaurants.

The tower will form the centrepiece of Heron International's Heron Plaza development on the site, incorporating new public spaces and a network of squares and gardens. In July 2009, Heron International confirmed that it had signed heads of terms with Four Seasons Hotels and Resorts to develop a mixed-use project as a component of Heron Plaza.[24] In January 2011, Heron announced that planning permission for the development had been secured.