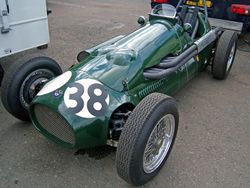 Hersham and Walton Motors (HWM) is the world's longest established Aston Martin business (having acquired the franchise in 1951) and is well known as a racing car constructor. As a constructor, it is best known for its involvement in Formula Two from 1950 to 1953 and Formula One in 1954. Then HWM owners George Abecassis and John Heath went racing together from 1946 and in 1948 they built a streamlined sports racing car on the chassis of a Sports Alta, and thus embarked upon the construction of racing cars and racing sports cars at their motor works in Walton-on-Thames, England. The 1948 car gave them encouraging results and so new car, this time called an HW-Alta, was constructed and raced in 1949; this car was sufficiently successful to convince the partners to embark upon building a full team of cars for the 1950 Formula Two season of British and continental events: these cars were known as HWMs.

From 1950 to 1952, HWM achieved remarkable success in Formula Two for a team that was run on very little money and yet which faced the might of continental marques in every race. By 1953 they were outclassed, but when the international Formula changed in 1954, John Heath constructed a works car to compete in Formula One. HWM abandoned the new Formula One after two appearances as their car was seriously outclassed. Meanwhile, the first Jaguar-engined HWM sports racing car had appeared in 1953, and this had some success with George Abecassis at the wheel. From then on until 1957, the team was involved in sports car racing both in Britain and on the continent, sometimes beating their Jaguar and Aston Martin Works competitors. After John Heath was killed on the 1956 Mille Miglia in Italy in an HWM Works car, Abecassis did not wish to continue and the works racing programme continued for just a year.

Results of other HWM cars