From Infogalactic: the planetary knowledge core
Jump to: navigation, search
Not to be confused with Hartford.
For other uses, see Hertford (disambiguation).

The earliest reference to the town appears in the Ecclesiastical History of the English People, written by Bede in 731 AD, which refers to "Herutford". "Herut" is the Old English spelling of "hart", meaning a fully mature stag; thus the meaning of the name is a ford where harts are found.[2] The Domesday Book of 1086 gives a spelling of "Hertforde".[3]

Hertford has been the county town of Hertfordshire since Saxon times when it was governed by the king's reeves. By the 13th century, the reeves had been replaced by a bailiff, elected by the burgesses. Charters of 1554 and 1589 established a common council of eleven chief burgesses and a bailiff. Another charter of 1605 changed the bailiff's title to mayor. In 1835, Hertford became a Municipal Corporation; the ratepayers elected twelve councillors, who chose four aldermen, aldermen and councillors composing the council. This body elected the mayor.[4]

Hertford is at the confluence of four river valleys: the Rib, Beane and Mimram join the River Lea at Hertford to flow south toward the Thames as the Lee Navigation, after Hertford Castle Weir.The shared valley of the Lea and the Beane is called Hartham Common and this provides a large park to one side of the town centre running towards Ware and lying below the ridge upon which Bengeo is situated.

The town centre still has its medieval layout with many timber-framed buildings hidden under later frontages, particularly in St Andrew Street. Hertford suffers from traffic problems despite the existence of the 1960s A414 bypass called Gascoyne Way which passes close to the town centre. Plans have long existed to connect the A10 with the A414, by-passing the town completely. Nevertheless, the town retains very much a country-town feel, despite lying only 19.2 miles (30.9 km) north of Central London. This is aided by its proximity to larger towns such as Harlow, Bishop's Stortford and Stevenage where modern development has been focused. 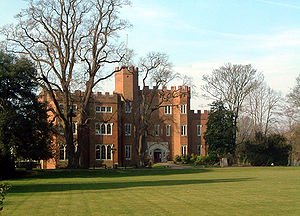 Possibly the first mention of the town was in 673 A.D.: the first synod of a number of the bishops in England was held either in Hertford or at Hartford, Cambridgeshire.[5] It was called by Theodore of Tarsus; decisions included the calculation of the date of Easter.[6] In 912 AD, Edward the Elder built two burhs (earthwork fortifications) close by the ford over the River Lea as a defence against Danish incursions. By the time of the Domesday Book, Hertford had two churches, two markets and three mills. The Normans began work on Hertford Castle, and Hertford Priory was founded by Ralph de Limesi.[7] King Henry II rebuilt the castle in stone, but in 1216, during the First Barons' War, it was besieged and captured after 25 days by Prince Louis of France.[8] The castle was regularly visited by English royalty and in 1358, Queen Isabella, wife of Edward II, died there. The priory was dissolved in 1536 and subsequently demolished[7] and in 1563, the Parliament of England met at the castle because of an outbreak of plague in London. Hertford grew and prospered as a market and county town; communication was improved by the construction of the Lea Navigation Canal in 1767 and the arrival of the railway in 1843.[9] 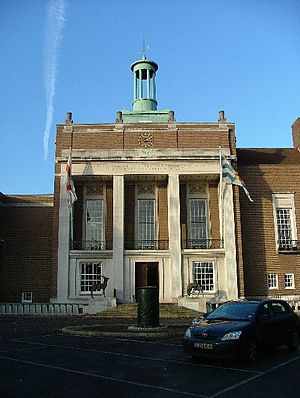 A fair amount of employment in the town is centred on County Hall (Hertfordshire County Council), Wallfields (East Hertfordshire District Council) and McMullens Brewery, one of a dwindling number of independent pre-1970 family brewers in the United Kingdom. Many residents commute to work in London.

In comparison with neighbouring towns Hertford differs with the absence of a modern shopping development (mall). However, it has most of the usual supermarkets. A Tesco store occupies part of the former Christ's Hospital Bluecoat Girls School, which closed down in 1985. Sainsburys opened a new store on part of the McMullens Brewery site in June 2012.[10] A Waitrose occupies a reasonably large store in the Bircherley Green Shopping area. The local branch of Woolworths closed for good on 27 December 2008, after the collapse of that store chain. There are fewer of the usual chain shops found in most high streets and this makes Hertford stand out from other "clone towns". There are a high number of independent shops in the town, with a variety of boutiques and salons. 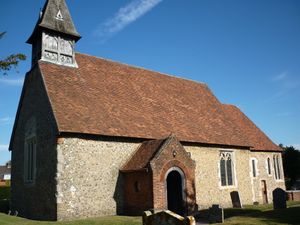 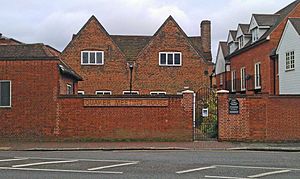 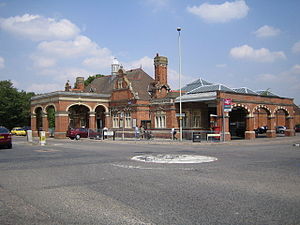 Hertford serves as a commuter town for London, and has two stations :

The A414 main road now bypasses the town centre to the south and runs east to Harlow, the M11 and Chelmsford and runs west to Hatfield, the A1, St Albans and the M1. Hertford also lies just west of the A10 and the Kingsmead Viaduct which links it south to London and the M25 and north to Royston and Cambridge.

For all bus and coach timetables see Intalink.[22]

Private schools include St. Joseph's In The Park,[28] Duncombe School,[29] (a preparatory school in Bengeo) and Haileybury College in Hertford Heath.

Former schools include The Pines JMI school which was built on the Pinehurst estate in 1977 and closed in 2003.

Hertford Theatre, previously known as Castle Hall, is a modern theatre, cinema and art gallery complex at The Wash in the town centre.[30] The Hertford Corn Exchange is a building where entertainment such as comedy and art exhibitions take place. Hertford has many food, drink and entertainment establishments which have grown in number considerably since the eighties and nineties. It attracts people from nearby towns, and often the North London suburbs. There are approximately 25 pubs and clubs in the area,[31] and around 35 restaurants, takeaways and snack bars.[32] Hertford also benefits from public swimming pool and gym facilities and a small skatepark, all situated on Hartham Common.