Hesketh Racing was a Formula One constructor from the United Kingdom, which competed from 1973 to 1978. The team competed in 52 World Championship Grands Prix, winning one and achieving eight further podium finishes. Its best placing in the World Constructors' Championship was fourth in 1975. Hesketh was notable for giving James Hunt his Formula One debut and he brought the team most of its success. Alan Jones also began his Formula One career in a privately entered Hesketh.

The eccentric Englishman Lord Hesketh met up with Anthony 'Bubbles' Horsley, and the pair entered various Formula Three events around Europe in 1972, with the mission objective simply to have as much fun as possible. Unsurprisingly, given Horsley's lack of experience, there were few results.

Hesketh subsequently employed James Hunt, who had a reputation for being very fast, but also for writing off cars, and at the time was unemployed. Hesketh took on Hunt as one of his drivers for F3.

The Hesketh team had a growing reputation for their playboy style, arriving at races in Rolls-Royce cars, drinking champagne regardless of their results, and checking the entire team into five-star hotels. The team even had a patch specially made for Hunt's driving suit which read: "Sex - The Breakfast of Champions".

By the middle of the season Hunt and "Bubbles" had written off both Formula Three cars. Horsley decided to leave the cockpit, switching to the team management. Hesketh rented a Formula Two March for the rest of 1972, and bought Hunt a Surtees Formula Two car for 1973. Hunt then promptly wrote the car off at the Pau Grand Prix, and in typical style, Hesketh worked out the cost involved in competing in the top flight was hardly more expensive than F2, he decided to move the team up to Formula One.

Hesketh rented a Surtees TS9 for the non-championship Race of Champions at Brands Hatch, with Hunt finishing 3rd. This success led to the purchase of a March 731, with Hesketh also signing junior March Engineering designer Harvey Postlethwaite to modify the chassis, working from Hesketh's Easton Neston estate. The car made its first appearance at the 1973 Monaco Grand Prix, where Hunt ran 6th before the engine failed. He would score a point at the team's next entry, the French Grand Prix, improve to 4th for the British Grand Prix, then 3rd for the Dutch Grand Prix. He then took a superb 2nd place in the season-closing United States Grand Prix.

1974 saw Postlethwaite design an all-new car for the team, the Hesketh 308, which was ready for the Silverstone International Trophy, which Hunt promptly won, making its Championship debut at the Spanish Grand Prix. The car was good, taking three third places at the Swedish Grand Prix, the Austrian Grand Prix and the United States Grand Prix. For 1975, examples of the 308 were sold to Harry Stiller Racing, who gave Alan Jones his Grand Prix debut. Polar Caravans also purchased a Hesketh chassis, while the works team modified the 308 for Hunt. At the same time, Horsley was developing into an extremely efficient and competent team manager and under his guidance, the team moved forward.

Hunt took a hugely popular win in the wet/dry 1975 Dutch Grand Prix, holding off Niki Lauda's dominant Ferrari, and also led at the British Grand Prix and the Austrian Grand Prix, taking several placings on his way to 4th overall. 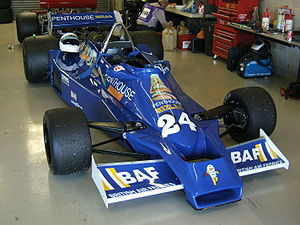 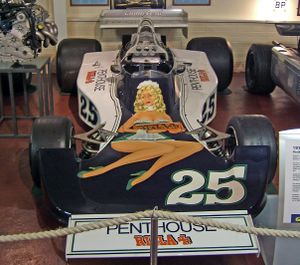 A Hesketh 308D on show at the Donington Grand Prix Exhibition

In late 1975 Lord Hesketh announced he could no longer afford to try to produce the next British World Champion, having raced without sponsorship, and ended the team. Hunt was offered the lead drive at McLaren, replacing Emerson Fittipaldi.[1]

The Hesketh name would live on in Formula One, admittedly in less glamorous circumstances. Firstly, Postlethwaite took his upgraded 308C design to Wolf-Williams Racing. Secondly, Horsley would upgrade the 308 to the 308D and continue as Hesketh Racing. Harald Ertl signed to drive the car, with the team's image landing Penthouse Magazine and Rizla as sponsors, with Guy Edwards joining in a second car from the Belgian Grand Prix, with Alex Ribeiro bringing in some funds later in the year. Ertl's 7th place at the British Grand Prix was the team's best result of the year.

Frank Dernie designed the new 308E chassis for the 1977 season, with Rupert Keegan driving alongside Ertl. Later in the season a third car was entered for Héctor Rebaque, with Horsley simply trying to bring in money to the team. Ertl would leave, to be replaced by Ian Ashley, but by now Keegan's was the only entry that usually made it to the grid, and his 7th place at the Austrian Grand Prix would be the team's best finish of the year.

1978 saw the team slimmed down to a single car, with backing from Olympus Cameras. The car itself was barely upgraded, and Divina Galica unsurprisingly failed to qualify for the first two races. Eddie Cheever then managed to get into the South African Grand Prix, retiring with a fractured oil line. Derek Daly was the next to try the car, and at the wet International Trophy at Silverstone on his debut diced for the lead with James Hunt's McLaren before a stone cracked his visor and ended his race. However, in World Championship events he failed to qualify for the next three races, after which the team folded.

The Ibec-Hesketh 308LM, also later referred to as the Ibec P6 or Ibec 308LM Cobra, is a one-off sports prototype racing car that was built in 1978, and was designed by Harvey Postlethwaite around many components of the Hesketh 308 Formula One car. The car was funded by Lloyd's of London insurance broker Ian Bracey, who formed the Ian Bracey Engineering Company (Ibec, pronounced eye-beck) to oversee the project.

Unlike many privateer sports car entrants in the late 1970s, Ian Bracey harboured serious hopes of winning the 24 Hours of Le Mans endurance race. Rather than buy an only partially competitive off-the-peg chassis on which to build, Bracey commissioned former Hesketh Chief Designer Postlethwaite to design a brand new chassis around a detuned 3.0-litre Cosworth DFV engine. Postlethwaite used his Hesketh connections to buy both front and rear suspension componentry from the F1 team, and the building of the car was commenced in the Hesketh workshops. However, as the Hesketh racing team's fortunes dipped, the Ibec chassis dropped down the priority list and eventually Bracey moved production to Lyncar in Slough. Here, facing a tight deadline, the Lyncar team managed to complete the car in only just over five weeks.[2]

The Ibec design, while bespoke, was not adventurous. The main chassis was formed by a riveted and bonded aluminium monocoque, behind which the DFV engine and Hewland FG400 gearbox were bolted as stressed chassis members. Suspension was by double wishbones at the front, with twin trailing arms, parallel lower links and single top links at the rear. The car was clothed in fibreglass bodywork which had been properly wind tunnel tested, and which proved highly effective at generating both downforce in corners and stability at high-speed. The total cost of designing and building the 308LM was less than £100,000,[2] approximately £0.5 million at 2005 prices, more than most privateer teams, but far lower than many contemporary factory race programs.

The car's first competitive outing was, as planned, at the 1978 24 Hours of Le Mans race, driven by Ian Grob and Guy Edwards, with Bracey himself acting as reserve driver. Edwards's presence in the team had an additional benefit as his skills at sponsorship negotiation landed the small Ibec team with backing from the giant Chrysler corporation, despite the 308LM being Ford-powered. Edwards also qualified the Ibec in 13th position, at an average speed of 133 mph.[2] However, in the race itself the car suffered from mechanical troubles which dropped it to 42nd position after just a few hours. Despite recovering well from this early setback, in the 19th hour the DFV engine failed completely and the Ibec's race was over.

The Ibec 308LM also failed to finish at its one further Le Mans outing, in the 1981 event, driven by Tiff Needell and Tony Trimmer, before the car was converted for use in the UK Thundersports championship during the mid-1980s.

^1 – Not entered as a constructor.