Hesse-Nassau was created as a consequence of the Austro-Prussian War of 1866 by combining the previously independent Hesse-Kassel (or Hesse-Cassel), the Duchy of Nassau, the Free City of Frankfurt, areas gained from the Kingdom of Bavaria, and areas gained from the Grand Duchy of Hesse (Hesse-Darmstadt; including part of the former Landgraviate of Hesse-Homburg). These regions were combined to form the province Hesse-Nassau in 1868 with its capital in Kassel and redivided into two administrative regions: Kassel and Wiesbaden.

On 1 April 1929, the Free State of Waldeck became a part of Hesse-Nassau after a popular vote and became part of the Kassel administrative region.

In 1935, the Nazi government abolished (de facto) all states, so the provinces held little meaning. In 1944, Hesse-Nassau was split into the provinces of Kurhessen (capital in Kassel) and Nassau (capital in Wiesbaden). In 1945, after the end of World War II, these two provinces were merged and combined with the neighbouring Hesse-Darmstadt to form the northern and western part of the newly founded state of Hesse. Parts of Nassau were also moved into the Rhineland-Palatinate.

The flag of Hesse-Nassau is identical to that of the Netherlands. The Dutch royal house originates from the Duchy of Nassau.

The coat of arms is split into three parts, each part showing the coats of arms for the three entities that formed Hesse-Nassau: 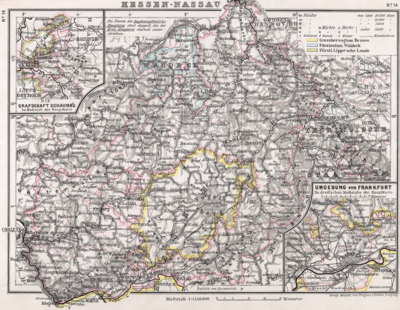