From Infogalactic: the planetary knowledge core
Jump to: navigation, search
For the river in Russia, see Kheta River.

Heta is a conventional name for the historical Greek alphabet letter Eta (Η) and several of its variants, when used in their original function of denoting the consonant /h/. The letter Η had been adopted by Greek from the Phoenician letter Heth (

) originally with this consonantal sound value, and Hēta was its original name. The Italic alphabets, and ultimately Latin, adopted the letter H from this Greek usage. However, Greek dialects progressively lost the sound /h/ from their phonological systems. In the Ionic dialects, where this loss of /h/ happened early, the name of the letter naturally changed to Ēta, and the letter was subsequently turned to a new use denoting the long half-open /ɛː/ sound. In this function it later entered the classical orthography adopted across the whole of Greece. 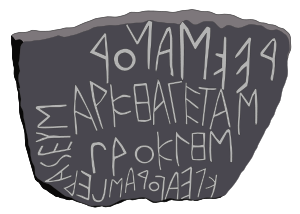 In dialects that still had the /h/ sound as part of their phonological systems, including early Athens, the same letter continued to be used in its consonantal function. Just like vocalic Eta, it could occur in a number of glyph variants in different local varieties of the alphabet, including one shaped like a square "8" similar to the original Phoenician (

) or with diagonal bars ( 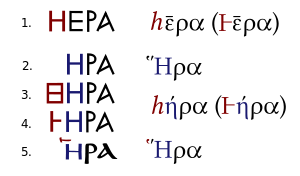 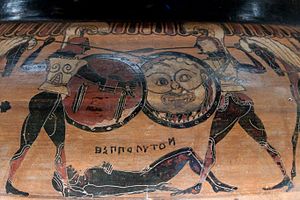 ), and M-shaped San instead of Sigma.

During the classical era, more dialects adopted the new Ionian vocalic Eta (as Athens did around c. 400 BC). As many of these dialects nevertheless still also pronounced /h/, they faced the problem of distinguishing between their own old consonantal symbol and the new vocalic symbol. Some dialects, including classical Attic, simply omitted the marking of the /h/-sound. In others (for instance Rhodes), the same symbol was used in both functions.[3] Others distinguished between glyph variants, for instance in Delphi by using the closed square sign (

) for /h/, and the open H for the vowel. In the southern Italian colonies of Heracleia and Tarentum, a new innovative shape for /h/ was invented, consisting of a single vertical stem and a rightward-pointing horizontal bar, like a half H (

). From this sign, later scholars developed the rough breathing or spiritus asper, which brought back the marking of the old /h/ sound into the standardized post-classical (polytonic) orthography of Greek in the form of a diacritic.

From scholia to the grammar of Dionysius Thrax, it appears that the memory of the former consonantal value of the letter Η was still alive in the era of the Alexandrine Koiné insofar as the name of the vocalic η was still pronounced "heta" and accordingly written with a rough breathing. The later standard spelling of the name eta, however, has the smooth breathing.

Under the Roman emperor Claudius in the mid-1st century AD, Latin briefly re-borrowed the letter in the shape of the half-H tack glyph, as one of the so-called Claudian letters. It denoted the sonus medius, a short close vowel sound of a quality between i and u.

In modern transcriptions and editions of ancient Greek epigraphic text that use consonantal Heta, in any of its shapes, the letter is most often rendered simply with a Latin h, both in Latin transliteration and in Greek scholarly transcriptions (using lowercase in Greek, so that Latin h and Greek η are distinct). Some authors have also adopted the Heracleian "tack" Heta (

) for use in modern transcription.[6] Jeffery (1961) uses the tack symbol also as a modern label for the abstract grapheme, i.e. as a cover label for any letter shape denoting /h/ in any given local alphabet.

Unicode "Greek letter Heta" in an uppercase and lowercase version

The Unicode standard of computer encoding introduced code points for a tack-shaped "Greek letter Heta" designed for this usage in its version 5.1 of April 2008. Like other archaic letters, Unicode Heta comes in an uppercase and lowercase variant to cater for the needs of modern typography.[7] Type designers have created several designs for this new typographic lowercase form, one of them resembling a lowercase Latin h with a straight rightward horizontal bar. The Greek Heta codepoints are distinct from another set designed to represent the tack-shaped Claudian "Latin letter half H".