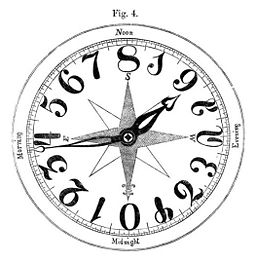 Nystrom's "Tonal Watch, or Clock-dial". Note the use of his invented digits for hex values 9-F. Also note that midnight (hour 0) is at the bottom, rather than the top of the clockface. 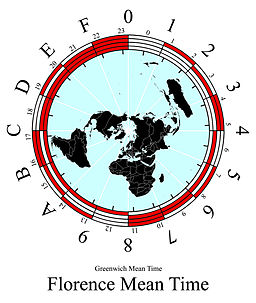 Hexadecimal time is the representation of the time of day as a hexadecimal number in the interval [0,1).

Hexadecimal time may have been used during the Tang Dynasty (7th-10th centuries) in China.[citation needed]

This time format was proposed by the Swedish-American engineer John W. Nystrom in 1863 as part of his tonal system.

In 1997, the American Mark Vincent Rogers of Intuitor proposed a similar system of hexadecimal time and implemented it in JavaScript as the Hexclock.[citation needed]

The system of Rogers

Intuitor-hextime may also be formatted with an underscore separating hexadecimal hours, minutes and seconds. For example: