Hickory is a city located primarily in Catawba County, North Carolina, United States, with parts in adjoining Burke and Caldwell counties. The city's population at the 2010 census was 40,010,[3] with an estimated population in 2013 of 40,361.[4] Hickory is the principal city in the Hickory-Lenoir-Morganton MSA, in which the population at the 2010 census was 365,497 and is also included as part of the Charlotte-Concord Combined Statistical Area.

In the 1850s, under a huge hickory tree, Henry Robinson built a tavern of logs.[citation needed] The city of "Hickory Tavern" co-founded by "Dolph" Shuford,[5] was established in 1863, and the name was eventually changed to the city of Hickory in 1873.[5]

The first train operated in the city of "Hickory Tavern" in 1859. The first lot was sold to Henry Link for $45.00 in 1858. His house is now known as "The 1859 Cafe," a restaurant (closed in 2011).[6] The community of Hickory was the first for many things in North Carolina, including the council-manager form of government it adopted in 1913. Hickory was also one of the first towns to install electric lights in 1888 and a complete sewage system in 1904.[7]

In 1891, Lenoir–Rhyne University (then Highland Academy) was founded by four Lutheran pastors with 12 initial students.[9]

Hickory is home to one of the oldest furniture manufacturers in the United States that is still located and operated on the original site. Hickory White, formerly known as Hickory Manufacturing Company, was built in 1902 and has been in continuous operation ever since. During World War II, the factory made ammunition boxes for the U.S. military instead of furniture.

Hickory was known in the years after World War II for the "Miracle of Hickory". In 1944 the area around Hickory (the Catawba Valley) became the center of one of the worst outbreaks of polio ever recorded. Residents who were then children recall summers of not being allowed to play outside or visit friends for fear of contracting the disease. Since local facilities were inadequate to treat the victims, the citizens of Hickory and the March of Dimes decided to build a hospital to care for the children of the region. From the time the decision was made until equipment, doctors, and patients were in a new facility, took less than 54 hours. Several more buildings were quickly added. A Red Cross official on the scene praised the project "as the most outstanding example of cooperative effort he has ever seen."[10]

The Hickory Police Department is a full-service municipal police agency with 152 full-time officers. This group of professionals provides law enforcement and community services to the citizens of Hickory.[17]

Hickory is home to the Hickory Crawdads, an affiliate of baseball's Texas Rangers, in the Class-A South Atlantic League.

Hickory is home to the Hickory Motor Speedway, nationally known as the Birthplace of the NASCAR Stars.

Hickory is located in western Catawba County at Lua error in Module:Coordinates at line 668: callParserFunction: function "#coordinates" was not found. (35.737682, −81.328372),[20] and extends westward into Burke County and Caldwell County. Interstate 40 passes through the southern part of the city, leading east 68 miles (109 km) to Winston-Salem and west 75 miles (121 km) to Asheville. U.S. Route 70 (Conover Boulevard) is an older east-west route through the city. U.S. Route 321 passes through the western part of the city, leading northwest 43 miles (69 km) to Boone and south 36 miles (58 km) to Gastonia.

Hickory is the largest city within the Hickory-Lenoir-Morganton MSA (Metropolitan Statistical Area). The MSA includes Catawba County, Burke County, Caldwell County, and Alexander County, with a combined population – as of the 2010 Census – of 365,497.[22]

The Hickory area historically competed in new industries and technologies by applying old strengths and favorable geography to new opportunities. In this way, wagon-making know-how, proximity to expansive forests, and excellent transportation via two intersecting railroads provided fertile ground for the emergence of the furniture industry.[23] Likewise experience with textile manufacturing and easy access to power drove new industries in both fiber-optic cable[23] and pressure-sensitive tape.[24]

The furniture industry in Hickory is not as strong as in the decades previous, but still a primary component in the area economy, and includes HSM (formerly Hickory Springs, founded 1944), a leading manufacturer of mattress coils.

Currently the area is home to many leading manufacturers of furniture, fiber optic cable, and pressure-sensitive tape.[24] It is estimated 60% of the nation's furniture used to be produced within a 200-mile (320 km) radius of Hickory. Forty percent of the world's fiber optic cable is made in the Hickory area.[25]

The Hickory area is additionally marketed as a data-center corridor[26] and is home to large data-centers operated by Apple and Google. Apple's billion-dollar data-center campus just south of Hickory is one of the world's largest.[27]

Hickory is the retail hub of the foothills and Unifour region, and is home to the largest shopping mall in the region Valley Hills Mall. 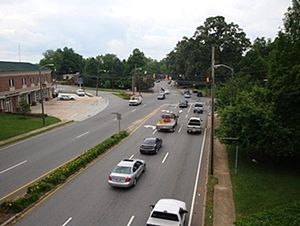 Hickory has been named an "All-America City" three times. The All-America City Award is given annually to only ten cities in the United States. It is an award that represents a community's ability to work together and achieve critical local issues. Hickory won this award in 2007, as well as 1967 and 1987.

According to the official City of Hickory website, the Hickory Metro area has been named the 10th best place to live and raise a family in the United States by Reader's Digest and the MSA (Hickory, Lenoir, Morganton) has been named 3rd best MSA in the country for business cost by Forbes.[28]

In 2014, Smart Growth America identified Hickory as being country’s most sprawling metro area.[29]

Lake Hickory was named after the city of Hickory and runs along its northern edge. The lake covers almost 4,223 acres (17.09 km2) with 105 miles (169 km) of shoreline. Full pond elevation is 935 feet (285 m). Lake Hickory is a reliable source of water for the cities of Hickory and Conover and the town of Longview.

The following notable people are or have been residents of the Hickory area: