Hieroglyphics: The Writings of Ancient Egypt

The Egyptian hieroglyphics text Hieroglyphics: The Writings of Ancient Egypt is one of the modern primers on the Egyptian language hieroglyphs, from the late 20th to early 21st century. The text is authored by Maria Carmela Betrò (1996).[1]

The standard version of analytic Egyptian hieroglyphs is based upon the 26 categories of the Gardiner's Sign List, (about 700 signs). That categorization is still the basic standard. The approach in Hieroglyphics: The Writings of Ancient Egypt is to use some of the Gardiner sign categories, to focus on specific major-use signs. The end of a thematic chapter then has synoptic write-ups for additional lesser used signs, or a sign from another category that is 'related'. it is related to the ancient Egypt

Betrò's book has the following standard categories, as chapters:

As can be seen the 26 categories of Gardiner's Sign List has been reduced to 7. There is no specific category for the Unclassified signs, Signs from Demotic, or the problematic signs.

With the older styles and outlines of hieroglyphs being redone and rethought by modern Egytologists, new approaches to books on the Egyptian language and the hieroglyphs have been tried. 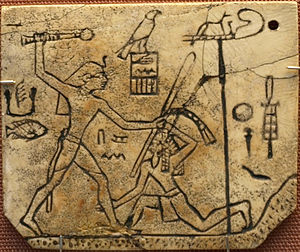 The text starts with a history, and The Origins; also The Gardiner List, Chronological Table, and the The Principles of Hieroglyphic Writing.[2]

The Origins section contains photos of the Libyan Palette, sides A, B; also the Narmer Palette, sides A, B, and the "Four Dogs Palette" at the Louvre. The Min Palette is also referenced in the text pages, as well as items specific to the cosmetic palettes of Ancient Egypt. It also explains the Old Kingdom label (Ancient Egypt), (for Pharaoh Den), with some of the oldest used hieroglyph sign examples, and also discusses the signs upon pottery.

The English text is 251 pages, and contains a short word glossary for 29 entries, a one-page bibliography, and a five-page index.[3]

The Gardiner sign list covers five pages,[4] with the 650+ signs, with hieroglyph topic pages in the red color for the glyph and a page number-adjacent, as a location .