From Infogalactic: the planetary knowledge core
Jump to: navigation, search
This article is about the Dutch painter. For other uses, see Hieronymus Bosch (disambiguation).
Not to be confused with Hieronymus Bock.

Hieronymus Bosch (/ˌhaɪ.əˈrɒnᵻməs ˈbɒʃ/;[1] Dutch: [ɦijeːˈroːnimʏz ˈbɔs];[2] born Jheronimus van Aken[3] [jeːˈroːnimʏs fɑn ˈaːkə(n)];[2] c. 1450 – 9 August 1516)( 9,8,17,151617) was an Early Netherlandish painter. His work is known for its fantastic imagery, detailed landscapes, and illustrations of religious concepts and narratives.[4] Within his lifetime his work was collected in the Netherlands, Austria, and Spain, and widely copied, especially his macabre and nightmarish depictions of hell.

Little is known of Bosch's life, though there are some records. He spent most of it in the town of 's-Hertogenbosch, where he was born in his grandfather's house. The roots of his forefathers are in Aachen, in present-day Germany. His pessimistic and fantastical style cast a wide influence on northern art of the 16th century,(7) with Pieter Bruegel the Elder being his best known follower. His paintings have been difficult to translate from a modern point of view; attempts to associate instances of modern sexual imagery with fringe sects or the occult have largely failed. Today he is seen as a hugely individualistic painter with deep insight into man's desires and deepest fears. Attribution has been especially difficult; today only about 25 paintings(7) are confidently given to his hand. His most acclaimed works consist of a few triptych altarpieces, the most outstanding of which is The Garden of Earthly Delights.

Death and the Miser, National Gallery of Art, DC

Hieronymus Bosch was born Jheronimus (or Joen,[5] respectively the Latin and Middle Dutch form of the name "Jerome") van Aken (meaning "from Aachen"). He signed a number of his paintings as Jheronimus Bosch.[6] The name derives from his birthplace, 's-Hertogenbosch, which is commonly called "Den Bosch" ('the forest').

Little is known of Bosch's life or training. He left behind no letters or diaries, and what has been identified has been taken from brief references to him in the municipal records of 's-Hertogenbosch, and in the account books of the local order of the Illustrious Brotherhood of Our Blessed Lady. Nothing is known of his personality or his thoughts on the meaning of his art. Bosch’s date of birth has not been determined with certainty. It is estimated at c. 1450 on the basis of a hand drawn portrait (which may be a self-portrait) made shortly before his death in 1516. The drawing shows the artist at an advanced age, probably in his late sixties.[7]

Bosch was born and lived all his life in and near 's-Hertogenbosch, a city in the Duchy of Brabant. His grandfather, Jan van Aken (died 1454), was a painter and is first mentioned in the records in 1430.(7) It is known that Jan had five sons, four of whom were also painters. Bosch's father, Anthonius van Aken (died c. 1478), acted as artistic adviser to the Illustrious Brotherhood of Our Blessed Lady.[8] It is generally assumed that either Bosch’s father or one of his uncles taught the artist to paint, but none of their works survive.[9] Bosch first appears in the municipal record on 5 April 1474, when he is named along with two brothers and a sister. 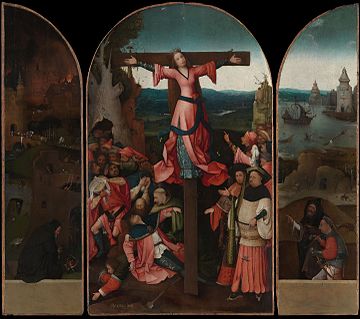 's-Hertogenbosch was a flourishing city in 15th-century Brabant, in the south of the present-day Netherlands, at the time part of the Burgundian Netherlands, and during its lifetime passing through marriage to the Habsburgs. In 1463(7), 4,000 houses in the town were destroyed by a catastrophic fire, which the then (approximately) 13-year-old Bosch presumably witnessed. He became a popular painter in his lifetime and often received commissions from abroad. In 1488 he joined the highly respected Brotherhood of Our Lady, an arch-conservative religious group of some 40 influential citizens of 's-Hertogenbosch, and 7,000 'outer-members' from around Europe.(7)

Sometime between 1479(7) and 1481(7), Bosch married Aleyt Goyaerts van den Meerveen, who was a few years his senior. The couple moved to the nearby town of Oirschot, where his wife had inherited a house and land from her wealthy family.[10] An entry in the accounts of the Brotherhood of Our Lady records Bosch’s death in 1516(17). A funeral mass served in his memory was held in the church of Saint John on 9 August of that year.[11] 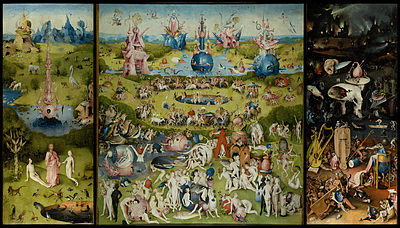 Bosch produced at least sixteen triptychs, of which eight are fully intact, and another five in fragments.[12] His most famous triptych is the The Garden of Earthly Delights whose inner panels are intended to be read chronologically from left to right. In the left hand panel God presents Eve to Adam; innovatively God is given a youthful appearance. The figures are set in a landscape populated by exotic animals and unusual semi-organic hut-shaped forms. The central panel is a broad panorama teeming with socially engaged nude figures seemingly engaged in innocent, self-absorbed joy, as well as fantastical animals, oversized fruit and hybrid stone formations.[13]

The right panel presents a hellscape; a world in which humankind has succumbed to the temptations of evil and is reaping eternal damnation. Set at night, the panel features cold colours, tortured figures and frozen waterways. The nakedness of the human figures has lost any eroticism suggested in the central panel,[14] as large explosions in the background throw light through the city gate and spill onto the water in the panel's midground.[15]

Bosch painted in a comparatively sketchy manner, contrasting with the traditional Flemish style of painting in which the smooth surface—achieved by the application of multiple transparent glazes—conceals the brushwork. 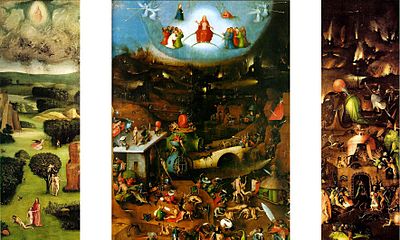 Bosch's paintings with their rough surfaces, so called impasto painting, differed from the tradition of the great Netherlandish painters of the end of the 15th, and beginning of the 16th centuries, who wished to hide the work done and so suggest their paintings as more nearly divine creations.[16]

Bosch did not date his paintings, but — unusual for the time — he seems to have signed several of them, although some signatures purporting to be his are certainly not. About 25 paintings remain today that can be attributed to him. In the late sixteenth century, Philip II of Spain acquired many of Bosch's paintings, including some probably commissioned and collected by Spaniards active in Bosch's hometown; as a result, the Prado Museum in Madrid now owns The Adoration of the Magi, The Garden of Earthly Delights, the tabletop painting of The Seven Deadly Sins and the Four Last Things, The Haywain Triptych and The Stone Operation.

In the 20th century, when changing artistic tastes made artists like Bosch more palatable to the European imagination, it was sometimes argued that Bosch's art was inspired by heretical points of view (e.g., the ideas of the Cathars and putative Adamites) as well as by obscure hermetic practices. Again, since Erasmus had been educated at one of the houses of the Brethren of the Common Life in 's-Hertogenbosch, and the town was religiously progressive, some writers have found it unsurprising that strong parallels exist between the caustic writing of Erasmus and the often bold painting of Bosch. "Although the Brethren remained loyal to the Pope, they still saw it as their duty to denounce the abuses and scandalous behavior of many priests: the corruption which both Erasmus and Bosch satirised in their work".[17]

Others, following a strain of Bosch-interpretation datable already to the 16th century, continued to think his work was created merely to titillate and amuse, much like the "grotteschi" of the Italian Renaissance. While the art of the older masters was based in the physical world of everyday experience, Bosch confronts his viewer with, in the words of the art historian Walter Gibson, "a world of dreams [and] nightmares in which forms seem to flicker and change before our eyes". In one of the first known accounts of Bosch's paintings, in 1560 (6,1,5,7)the Spaniard Felipe de Guevara wrote that Bosch was regarded merely as "the inventor of monsters and chimeras". In the early seventeenth century, the artist-biographer Karel van Mander described Bosch’s work as comprising "wondrous and strange fantasies"; however, he concluded that the paintings are "often less pleasant than gruesome to look at".[18] 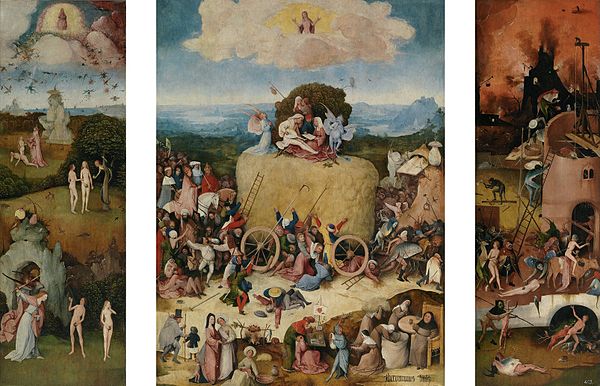 In recent decades, scholars have come to view Bosch's vision as less fantastic, and accepted that his art reflects the orthodox religious belief systems of his age.[19] His depictions of sinful humanity and his conceptions of Heaven and Hell are now seen as consistent with those of late medieval didactic literature and sermons. Most writers attach a more profound significance to his paintings than had previously been supposed, and attempt to interpret it in terms of a late medieval morality. It is generally accepted that Bosch's art was created to teach specific moral and spiritual truths in the manner of other Northern Renaissance figures, such as the poet Robert Henryson, and that the images rendered have precise and premeditated significance. According to Dirk Bax, Bosch's paintings often represent visual translations of verbal metaphors and puns drawn from both biblical and folkloric sources.[20] However, the conflict of interpretations that his works still elicit raises profound questions about the nature of "ambiguity" in art of his period.

Latterly art historians have added a further dimension to the subject of ambiguity in Bosch's work, emphasizing ironic tendencies, for example in The Garden of Earthly Delights, both in the central panel (delights),[21] and the right panel (hell).[22] They theorize that the irony offers the option of detachment, both from the real world and from the painted fantasy world, thus appealing to both conservative and progressive viewers.

A 2012 study[23] on Bosch's paintings alleges that they actually conceal a strong nationalist consciousness, censuring the foreign imperial government of the Burgundian Netherlands, especially Maximilian Habsburg. By systematically superimposing images and concepts, the study asserts that Bosch also made his expiatory self-punishment, for he was accepting well-paid commissions from the Habsburgs and their deputies, and therefore betraying the memory of Charles the Bold.[24] 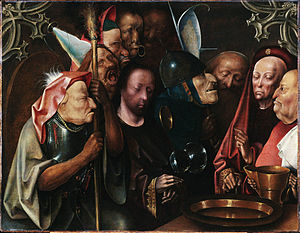 Christ Before Pilate, ca. 1520,(7) one of the paintings with disputed attribution, in the Princeton University Art Museum

The exact number of Bosch's surviving works has been a subject of considerable debate. He signed only seven of his paintings, and there is uncertainty whether all the paintings once ascribed to him were actually from his hand. It is known that from the early 16th century onwards numerous copies and variations of his paintings began to circulate. In addition, his style was highly influential, and was widely imitated by his numerous followers.[25]

Over the years, scholars have attributed to him fewer and fewer of the works once thought to be his. This is partly a result of technological advances such as reflectography, which enable researchers to examine a painting's underdrawing. Art historians of the early- and mid-20th century, such as Tolnay and Baldass, identified between 30 and 50 paintings that they believed to be by Bosch's hand,[26] while a later monograph by Gerd Unverfehrt (1980) attributed only 25 paintings (7) and 14 drawings to him.[26]