Higgs and Hill was a major British construction company responsible for building some of London's finest buildings.

The Company was established in 1874 by the merger of the firm of Thomas Hill (managed by Rowland and Joseph Hill, grandsons of the founder) with the firm of William Higgs.[1] It was originally called Hill, Higgs and Hill but changed it name to Higgs and Hill when Rowland Hill retired in 1879.[1] The Company was first based at Crown Works in Vauxhall but moved to New Malden in 1967.[2]

Sir Brian Hill, a member of the seventh generation of his family to work in the business, retired in 1992.[3] In 1994 it announced a rights issue to finance the acquisition of land for housing but the issue was not well subscribed.[4]

In 1996 the Company announced poor results arising from re-organisation charges and contract losses.[5] The Company was acquired by Hollandsche Beton Groep (later HBG) later that year.[3] HBG was itself acquired by Koninklijke BAM Groep in 2002.[6] 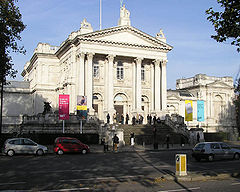 The Tate Gallery built by Higgs and Hill