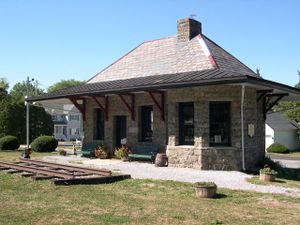 The High Bridge Branch connected to the Delaware, Lackawanna & Western Railroad (DL&W) and the Wharton & Northern Railroad just west of Wharton, New Jersey and to the Mount Hope Mineral Railroad and the Dover & Rockaway Railroad in Wharton. It originally connected with the Chester Branch of the DL&W at Chester north of U.S. Route 206, but from Long Valley to Chester became the Chester Branch when the railroad was extended north from long Valley to the Wharton area. The line once carried both freight and passengers, with iron ore being its primary commodity.

The Bartley-Kenvil section was purchased by Morris County from the State of New Jersey on 1986 and leased to regional short line operator Morristown & Erie Railway (M&E). Shortly thereafter, a new track connection was built east of Kenvil with the former DL&W Chester Branch named Ferromonte Junction.

Freight customers were sought after county acquisition. first was R. P. Smith & Co., a brick customer near Route 10 in Ledgewood. Service began on May 2, 1988. Within the next few years, the railroad was opened to Flanders to a plastic extruding company and ultimately to Bartley where Toys "R" Us built an almost fully automated regional distribution center of 1/2 million square feet with a footprint to expand to 1,000,000 square feet (93,000 m2). The line currently ends in Bartley, just south of Toys "R" Us. Frank Reilly, Executive Director of the Morris County Department of Transportation Management and M&E president were responsible for current operations on the line.

Local legend has named a ghost that haunted the High Bridge Branch in Washington Township just south of Bartley "the Hookerman". It periodically appeared between Naughright and Four Bridges Roads as a yellowish-orange light being swung from side to side as if warning trains to stop. According to the story, When the High Bridge Line was still new, a freight train was rumbling down the tracks. There was a brakeman on top the cars, who either fell asleep or got drunk and fell off the moving train and got his hand cut off by the train wheels. His hand was replaced by a hook and later the brakeman died. Since then his ghost has haunted the scene of the accident looking for his lost hand, while holding an old railroad lantern in his hook.

Few remnants remain of the line; occasional rotting wooden ties can be found along the rail trails. The former CNJ wye connection is still partially present in High Bridge in the parking area for the trail as is the CNJ Ken Lockwood Gorge Trestle above the South Branch of the Raritan River in High Bridge. In April 1885, the trestle collapsed as a train was going over it, sending several freight cars and at least one locomotive into the river.

There is a small section of track preserved in Califon and a small museum in the restored former Califon passenger station.

The remaining northern section of the High Bridge Branch has been owned by Morris County and managed under the auspices of the County's Department of Transportation Management since 1986. It is operated under a lease agreement by the Morristown & Erie Railway. The branch starts at Ferromonte Junction, which is a switch on the M&E Chester Branch. Until October 2013, the only active customer on the line was Blue Ridge Lumber which unloads cars at the Kenvil Team Track off U.S. Route 46. In October 2013, Triumph Plastics began receiving carloads of plastic at their facility in Flanders, NJ which marked the first revenue freight train to operate beyond Kenvil since 2008.[1] An annual "Toys For Tots" train runs in December along the length of the branch. The freight station in Flanders (on Hillside Avenue) is now a jeweler's store.