This article deals with the regional variety; "Hochdeutsch" or "High German" is also used in the sense of Standard German.

The High German languages or High German dialects (German: Hochdeutsche Dialekte) comprise the varieties of German spoken south of the Benrath and Uerdingen isoglosses in central and southern Germany, Austria, Liechtenstein, Switzerland, and Luxembourg as well as in neighboring portions of Belgium (Eupen-Malmedy) and the Netherlands (Southeast Limburg), France (Alsace and northern Lorraine), Italy (South Tyrol), and Poland (Upper Silesia). They are also spoken in diaspora in Romania, Russia, the United States, Brazil, Argentina, Mexico, Chile, and Namibia.

The High German languages are marked by the High German consonant shift, separating them from Low German and Low Franconian (Dutch) within the continental West Germanic dialect continuum. 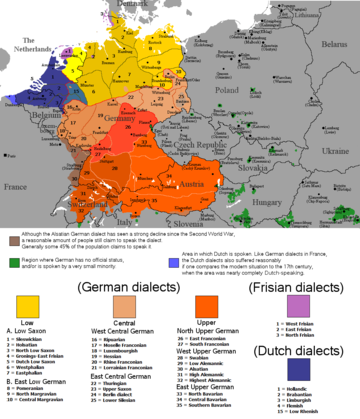 As a technical term, the "high" in High German is a geographical reference to the group of dialects that forms "High German" (i.e. "Highland" German), out of which developed Standard German, Yiddish and Luxembourgish. It refers to the Central Uplands (Mittelgebirge) and Alpine areas of central and southern Germany, it also includes Luxembourg, Austria, Liechtenstein and most of Switzerland. This is opposed to Low German, which is spoken on the lowlands and along the flat sea coasts of the North German Plain.[2]

High German in this broader sense can be subdivided into Upper German (Oberdeutsch, this includes the Austrian and Swiss German dialects), Central German (Mitteldeutsch, this includes Luxembourgish, which itself is now a standard language), and High Franconian which is a transitional dialect between the two.[3]

Old High German evolved from about 500 AD, around 1200 the Swabian and East Franconian varieties of Middle High German became dominant as a court and poetry language (Minnesang) under the rule of the House of Hohenstaufen.

The term "High German" as spoken in central and southern Germany (Upper Saxony, Franconia, Swabia, Bavaria) and Austria was first documented in the 15th century. Gradually driving back Low German variants since the Early modern period, the Early New High German varieties, especially the East Central German of the Luther Bible, formed an important basis for the development of Standard German.[5]

Divisions between subfamilies within Germanic are rarely precisely defined, because most form continuous clines, with adjacent dialects being mutually intelligible and more separated ones not. In particular, there has never been an original "Proto-High German". For this and other reasons, the idea of representing the relationships between West Germanic language forms in a tree diagram at all is controversial among linguists. What follows should be used with care in the light of this caveat.