The HIMARS carries six rockets or one MGM-140 ATACMS missile on the U.S. Army's new Family of Medium Tactical Vehicles (FMTV) five-ton truck, and can launch the entire Multiple Launch Rocket System Family of Munitions (MFOM). HIMARS is interchangeable with the MLRS M270A1, carrying half the rocket load.

The M142 High Mobility Artillery Rocket System (HIMARS) is the light, wheeled version of the M270 Multiple Launch Rocket System (MLRS). The HIMARS utilizes the same pod as the M270 MLRS uses. A pod can hold six rockets or a single missile. The windows are made of glass and layers of sapphire.[2]

18th Field Artillery Brigade (Airborne) at Fort Bragg, North Carolina was the initial army test bed unit for the M142 HIMARS. C Battery, 3rd Battalion, 27th Field Artillery Regiment began field testing 3 HIMARS prototypes in all types of training events and environments in 1998 as a residual of the Rapid Force Projection Initiative (RFPI) Advanced Concept Technology Demonstration (ACTD). In 2002, the United States Marine Corps arranged with the United States Army to acquire 40 of the systems. Fielding began in 2005. In July 2007, Marines from Fox Battery 2nd Battalion 14 Marine Regiment from Oklahoma City, Oklahoma were deployed to the Al Anbar province of Iraq. This is the first Marine unit to use the HIMARS in combat.

HIMARS was also tested as a common launcher for both artillery rockets and the surface-launched variant of the AMRAAM anti-aircraft missile.[3]

On February 14, 2010, the International Security Assistance Force (ISAF) for Afghanistan indicated in a press release that it was thought that two rockets fired from a HIMARS unit fell 300 metres short of their intended target and killed 12 civilians during Operation Moshtarak. ISAF suspended the use of the HIMARS until a full review of the incident was completed.[4] A British officer later said that the rockets were on target, that the target was in use by the Taliban, and use of the system has been reinstated.[5] Reports indicate that the civilian deaths were due to the Taliban's use of an occupied dwelling, the presence of civilians at that location was not known to the ISAF forces.[6] An October 21, 2010 report in the New York Times credited HIMARS with aiding the NATO offensive in Kandahar by targeting Taliban commanders' hideouts, forcing many to flee to Pakistan, at least temporarily.[7]

The United States Army is currently using the HIMARS in Iraq, firing at least 400 rounds at the Islamic State since the beginning of summer.[8] 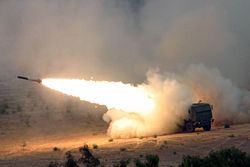 An MFOR rocket is launched from a HIMARS 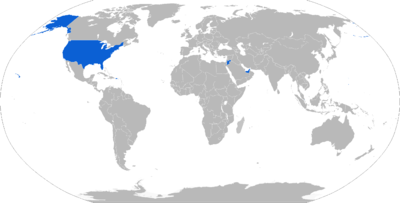 Map with HIMARS operators in blue

The Department of National Defence is considering the purchase of HIMARS. The former Chief of the Land Staff, Lieutenant-General Andrew Leslie, said the plan to acquire rocket launchers was something that "would be considered much further down the road—possibly in the 2012 time frame.[12][13][14][15]

Future substitute of the Teruel MRL.