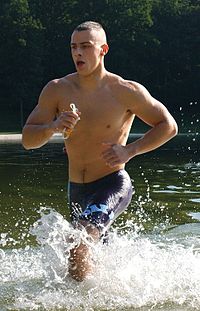 A Marine sporting a high and tight haircut.

The high and tight is a military variant of the crew cut. It is a very short hairstyle most commonly worn by men in the armed forces of the U.S. It is also popular with law enforcement officers and other public safety personnel.

Although "high and tight" is a term commonly used within the military and law enforcement communities, the same haircut is sometimes referred to by civilians as a "skin fade", meaning that the back and sides are shaved to the skin and the top is blended or faded into slightly longer hair.

While many variations of the style exist, the one common feature is that all of the hair on the sides and back of the head is clipped very close, usually ​1⁄16 inch (1.5 mm) or shorter, up to a point above the temples, referring to the "high" part of its name. A sharp line delineates the boundary between the close-cut sides and back and the longer top portion, referring to the "tight" part of its name. The crown of the head is spared the closest shaving to safely accommodate the weight of a combat helmet. The length of the top portion may vary, usually being 5–10 mm (​1⁄4 to ​3⁄8 inch), but sometimes left long enough to comb. Sometimes the back and sides of the head are shaved completely with a razor.

U.S. military haircuts must have a "tapered appearance on both sides and the back of the head, both with and without headgear. A tapered appearance is one that when viewed from any angle outlines the member's hair so that it conforms to the shape of the head, curving inward to the natural termination point without eccentric directional flow, twists or spiking" (Air Force Instruction 36-2903, 2014).

Beginning in the late 1980s, it crossed over into civilian life, being embraced first by mostly young black males (see hi-top fade), then spread to like-aged men in other groups. From the 1990s and to date, the hairstyle has also been popular among Middle Eastern youth, namely those of Lebanese and Assyrian descent. 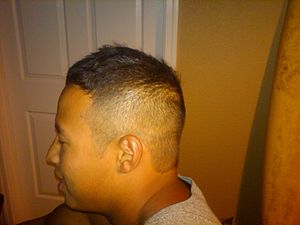 An airman with a "recon" style haircut

Horseshoe flattop
In this version of the high and tight, the top of the head is clipped in a flattop style, with the hair short enough that the scalp is plainly visible along the centerline of the anteroposterior axis of the head. This creates the distinctive appearance of seemingly having a horseshoe-shaped hairstyle. The exposed scalp is sometimes referred to as a "landing strip".

Recon
This version has higher boundaries, with the only hair present starting well above the crown of the head. The name is a reference to the haircut's association with reconnaissance units of the United States Army, United States Marine Corps, and United States Navy. The "recon" can also be cut short on the top to incorporate the look of the horseshoe flattop.