Highcliffe Castle, situated on the cliffs at Highcliffe, Dorset, was built between 1831 and 1835 by Charles Stuart, 1st Baron Stuart de Rothesay in a Gothic Revival style on the site of High Cliff house, a Georgian Mansion designed for the 3rd Earl of Bute ( a founder of Kew Gardens) with the gardens laid out by Capability Brown.[1] The design, by William Donthorne, a founder member of RIBA, incorporated large quantities of carved Medieval stonework salvaged from the Norman Benedictine Abbey of St Peter at Jumieges and the Grande Maison des Andelys. 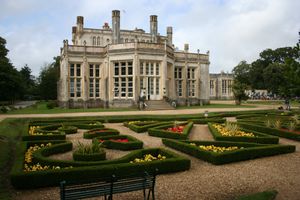 The Earl's fourth son, General Sir Charles Stuart sold the estate apart from the nearby smaller Bure Homage House. All that remains of the original High Cliff are the two entrance lodges, now used as a restaurant, also some of the garden walls and features in the lands. The son of Sir Charles Stuart, also Charles Stuart, decided to buy his grandfather's estate and build a new house there.

Charles Stuart was born in 1779, the eldest son of General Sir Charles Stuart and Anne Louisa who was the daughter of Lord Vere Bertie.

Educated at Eton college, in 1801 he entered the diplomatic service, serving it in Vienna, St Petersburg, French occupied Spain, and Portugal.[2] It was as ambassador in Spain that he became indispensable to the Duke of Wellington, and accompanied him during Napoleon's Hundred Days through to the Battle of Waterloo. After the defeat of Napoleon, Charles escorted the exiled French King Louis XVIII back to Paris and became British Ambassador there. During his ambassadorship in Paris he married the wealthy Lady Elizabeth Yorke, daughter of the 3rd Earl of Hardwicke. They had two daughters Charlotte (later Lady Canning), and Louisa (later Lady Waterford).[3] His greatest achievement was the treaty which enabled Brazil to become independent of Portugal in 1825. In 1828 he was made Baron Stuart de Rothesay, and in the same year was appointed for a second term as ambassador to France.

Early retirement from the diplomatic service meant Lord Stuart could start on the project to build a new family home, and by 1830 he had purchased much of the eastern end of the estate, which previously had been owned by his forebears. This allowed him to start construction of the modern Highcliffe Castle. William Donthorne, a founder member of the Royal Institute of British Architects designed Highcliffe Castle. The castle is built on an L shaped plan, oriented on a south-east axis, so the oriel window is central on the south east elevation, providing a vista across the landscaped gardens to a panorama of the needles and Isle of Wight. Used in the building of the house was carved medieval stonework from the Norman Benedictine Abbey of St Peter at Jumieges and from the Grande Maison des Andelys. Both of these buildings had fallen into disrepair after the French Revolution. Also included in the castle, were a 16th-century oriel window and a stained glass window.

After the Castle was completed, Charles became Ambassador to Russia in 1841. However ill-health caused his return to England and he died at Highcliffe in 1845. He was buried at St Mark’s Church, Highcliffe and his memorial can still be seen there.

After Charles’s death, his widow Lady Stuart de Rothesay inherited the castle. She died in 1867 and left the property to Louisa her younger daughter as Charlotte, the elder daughter, had predeceased her. Louisa had been born in 1818 in Paris. The family moved into Highcliffe Castle in 1834 and lived there and also in their London residence. Louisa wrote some of her memories of her life at Highcliffe Castle which were recorded in a book by Hare.[4]

In 1842 Louisa married Henry, Marquis of Waterford and became the Marchioness of Waterford. The couple lived at Curraghmore, County Waterford for many years, and during this time Louisa became an accomplished painter whose work is still valued today. Her husband died in 1859 and she moved to the estate left to her in Ford in Northumberland.[5] It was here that she built a school hall and on the walls painted Biblical scenes. These paintings survive today in what is now called Lady Waterford Hall in Ford.[6]

“The late breakfast in the pleasant room which looks across the sunlit sea to the Isle of Wight through the leaves of large magnolia trees was always a happy meeting, at which Lady Waterford brimmed over with the anecdotes and reminiscences evoked by her morning letters. Immediately afterwards she would read aloud from the newspapers in the porch-room, then she went to write in her own room, and her guests dispersed till she summoned them back by playing and singing loudly with wide-open windows. Then all adjourned to the library, where one of the party read aloud, whilst Lady Waterford painted. After luncheon there was a walk, generally on the sands, often to the Haven House and its wild fir wood.".[7]

She entertained the Prince and Princess of Wales (later King Edward and Queen Alexandra) at Highcliffe Castle. In 1880 she recounts one of their visits.

"I have had a great surprise in the unexpected visit of the Prince and Princess of Wales, with their two sons and the three little Princesses, landing on the beach, coming up to tea, and drawing nets on the shore till evening — the young Princes swimming about in flannels, and finally the Prince and two sons swimming away to join the steam-tug."[8] A picture of the royal family at around the same time as this visit is shown on the left.

In 1891 Lady Waterford died and as she had no children she left Highcliffe Castle to a very distant cousin Edward Stuart Wortley.[9]

Edward James Stuart Wortley was born in 1857. He was the second son of the Hon Francis Dudley Montagu Stuart Wortley and Maria Elizabeth Martin. He was educated at Eton in 1886 and afterwards joined the Army. In 1877 he entered the Kings Royal Rifle Corps. He distinguished himself in the First Boer War in the 1880s and in other African Battles until 1900. In 1901 he became Military Attache in Paris which he held for three years before returning to England.

In 1907 Kaiser Wilhelm II stayed at Highcliffe Castle for three weeks to recover his health. This visit was widely publicised. While he was there, the Kaiser presented two stained glass windows to Stuart Wortley which were inserted in one of the rooms.[10] In the following year he was invited to be guest of honour to the German Army manoeuvres held in Alsace. He was promoted to Major General in 1913. He served in the First World War but his Division did not greatly distinguish itself and he was sent to Ireland to help quell the rebellion there. He retired from the Army in 1919 and died in 1934.

His wife Violet Stuart Wortley (née Guthrie) was the longest resident of Highcliffe Castle. She was born in 1866 and married Edward in 1891, the same year that he inherited the Castle form Lady Waterford. The couple had three children Nicholas, Louisa and Elizabeth. Unfortunately Nicholas died in 1926 at the age of 34. Violet wrote many books, most notably the history of the Stuart family called “Highcliffe and the Stuarts.[11] Towards the end of her life she wrote an autobiography called “Life Without Theory” which outlined her early life.[12] She sold Highcliffe Castle in 1949 and died four years later in 1953. 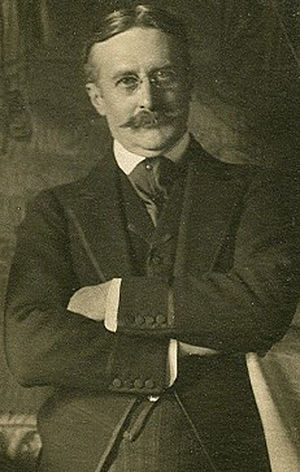 During the time that the Stuart Wortleys owned the Castle it was rented several times. One of the most notable tenants from 1916 to 1922 was the American-born retail entrepreneur Harry Gordon Selfridge. He lived there with his wife Rosalie, his mother Lois and son Gordon.

At the age of 21, Wisconsin-born Selfridge joined the wholesale retail firm of Marshall, Field and Co in Chicago, where he worked for 25 years.[13] He rose to become a junior partner, and amassed a considerable fortune. In 1906 he came to London and opened his own store, Selfridges, in 1909. It was a huge success as he introduced new American ways of marketing.

In 1916 Selfridge leased Highcliffe Castle. Although he was only a tenant he set about fitting modern bathrooms, installing steam central heating and building and equipping a modern kitchen.[14] During the War Rosalie opened a tented retreat called the Mrs Gordon Selfridge Convalescent Camp for American Soldiers in the castle grounds. Unfortunately Rosalie died in 1918 and Harry's mother Lois died in 1924. Harry did not do well after this and squandered his money, giving up the lease to Highcliffe in 1922. He died almost penniless in 1947 in Putney, and is buried in St Marks Churchyard at Highcliffe next to his wife and mother.

In 1950 local businessman J.H.Leonard Lloyd bought it from the Stuart Wortley family to turn into a children’s convalescent home. Having already founded a similar home in Lynton, North Devon, he charged four guineas a week. Within a year, media allegations of the indecent assault of children led to a subsequent court case, which although dismissed resulted in the home's closure.

Put on the market for £45,000, it was bought by a developer, who created Rothesay Drive on the estate lands on which he built new private homes. The following year, he sold on the castle and residual gardens for £14,000 to the Roman Catholic Claretian Missionary, who wanted to develop a training centre for student priests. To add a chapel, they removed the stone double staircase from the Great Hall, and built a dormitory next to the East Wing which now houses the Castle’s tearooms. Latterly used as a seminary, with rising maintenance costs the Claretians moved out in 1966.

Bought for £21,000 in 1967 by three local businessmen, a fire just before this badly damaged the Great Hall, and another fire the following year caused more devastation. Blocked from any form of development or demolition, resultantly exposed to the weather and vandals, the Castle deteriorated into a ruin. National concern about its fate was voiced by English Heritage, the Ancient Monuments Society, the Victorian Society, the Buildings at Risk Trust, SAVE Britain’s Heritage, as well as prominent architectural historians.

After a long series of legal redevelopment disputes with the businessmen, in 1977 Christchurch Council compulsorily purchased the Castle for £65,000 – its valuation set by a Land Tribunal undertaken by the Adjudicator to HM Land Registry – and opened the grounds and beach access to the public to mark the Queen’s Silver Jubilee. Unable to afford the projected cost of restoration, in 1986 the Council offered the building on a 125-year lease for it to be restored for residential or hotel use within three acres of land for enabling development, but although several schemes were submitted none materialised.

In 1989 the council and English Heritage jointly commissioned Niall Phillips Architects of Bristol to consider what future the Castle might have. In 1990 a shroud of scaffolding and sheeting was put around it to protect it, and in 1994 a start was made on a phased scheme to repair and conserve the building, funded initially by Christchurch Council and English Heritage. The first phase repaired the Castle’s south wing, including the Wintergarden, Drawing Room and Library. On its completion, the Heritage Lottery Fund agreed to fund the Council’s £2.6million bid, enabling all major repairs to be completed by 1998, including the rebuilding of the East Tower which had been demolished in 1974 when it became unsafe. Craftsmen and women from Dorchester-based St Blaise Ltd won a prestigious Stone Federation award for their work on the Castle, with the judges describing it as “a textbook example of great care and skill”.

Highcliffe Castle is a Grade I listed building now owned by Christchurch Council, and described as "the most important remaining example of the Romantic and Picturesque style of architecture."[15] It holds events, is open to the general public throughout the year and can be used for weddings and other private events.