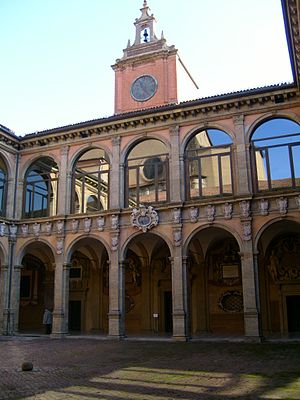 University of Bologna, Italy and Europe's oldest university, founded in 1088

Higher education in Italy is mainly provided by a large and international network of public and state affiliated universities. State-run universities of Italy are under the supervision of Italian's Ministry of Education. There is also a number of private universities and state-run post-secondary educational centers providing a vocational instruction.

Universities in Italy fits the framework of the Bologna Process since the adoption, in 1999, of the so-called 3+2 system. The first level degree is the Laurea triennale that can be achieved after three years of studies. Selected students can then complete their studies in the following step: two additional years of specialization which leads to the Laurea Magistrale.

The "Laurea triennale" corresponds roughly to a Bachelor Degree while the "Laurea Magistrale" corresponds to a Master Degree. Only the Laurea Magistrale grants access to third cycle programmes (Post-MA degrees, Doctorates or Specializing schools), that last 2 to 5 years (usually completing a PhD takes 3 years). However, there is just a unique five-year degree "Laurea Magistrale Quinquennale" (Five-Year Master of Arts) for some programmes such as Law (Facoltà di Giurisprudenza), Arts (Accademia di Belle Arti[disambiguation needed]) and Music (Conservatorio di Musica). The title for MA/MFA/MD/MEd graduate students is Dottore (abbreviation in Dott./Dott.ssa or Dr., meaning Doctor). This title is not to be confused with the PhD and Post-MA graduates, whose title is Dottore di Ricerca (Research Doctor or Philosophy Doctor).

The Italian master's degree should not be confused with Italian "Masters" that are one-year specialistic courses which guarantee a more practical education but do not give access to further levels of studies.

Universities in Italy can be divided into 4 groups:

The Superior Graduate School (Grandes écoles)[3] or Scuola Superiore Universitaria offer recognized national and international titles, including the Diploma di Perfezionamento equivalent to a Doctorate, Dottorato di Ricerca i.e. Research Doctorate or Doctor Philosophiae i.e. Ph.D.[4] and are recognized by the Ministry of Education, Universities and Research (Italy) (MIUR)[5] as fully autonomous. Some of them also organize courses Master's degree, individually, or jointly with the universities with whom they work.

There are three Superior Graduate Schools with "university status", three institutes with the status of Doctoral Colleges, which function at graduate and post-graduate level. Nine further schools are direct offshoots of the universities (i.e. do not have their own 'university status').

Sant'Anna School of Advanced Studies also has long history of existence within overall Italian educational excellence, as its origins are in Collegio Medico-Giuridico of Scuola Normale Superiore di Pisa and Conservatorio di Sant’Anna, an even older educational institution originating its roots in the 14th century.[6]

These institutions are commonly referred to as "Schools of Excellence" (i.e. "Scuole di Eccellenza").[3][7]

Higher education in Italy is mainly covered by universities and superior graduate schools, with almost no professional or vocational school following the secondary education. This is considered a weak point of the Italian post-secondary education.[8] However, Italian system provides a few vocational schools and courses. There are two main vocational paths after having obtained a secondary degree: those courses called "Istruzione e Formazione Tecnica Superiore" (IFTS; "Higher technical training and education"), and the "Istituti Tecnici Superiori" (ITS; "Higher technical institutes").

The first ones, IFTS, were established in the late nineties and are managed on regional basis. An IFTS course lasts between 1 and 2 years and it is usually strictly connected with a secondary school specialised in the same field of studies.[8] These courses were generally unsuccessfully: in 2007 on a number of 450.000 students with a secondary degree, only 2430 of them (0,54%) followed an IFTS course.[8] The ITS, created in 2008, lasts 2 years and are managed by a secondary institute in collaboration with local universities or institutions.[8]